Last week we discussed the state of the USD and the very real potential for a rethink of the world currency for settlement. This week our argument only becomes stronger as the United States has been put on review by the rating agencies. It may have taken the agencies a while to come to this conclusion (tongue in cheek) but it didn't take the market long to react. The outcome in the currency markets hasn't been favorable to say the least.

This article is a short review of where we are heading but no secrets, I would say that direction doesn't have a bright future as it stands.

Last week we looked at the move on gold by the central banks and the USD parallax relationship with other currencies in the world article here.  This week, Singaporean exporters who are settling in the USD cross will be settling for less yet again. 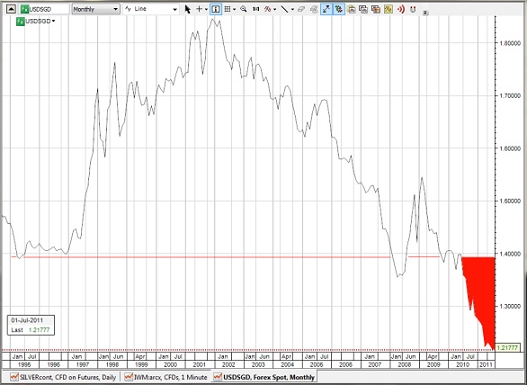 In effect, if you were to trade a product for $5000 USD, as a Singaporean exporter that would have netted you around $7100 SGD on a bad day a couple of years back. About the same you would have earned in 1996. Today however, your take home would be $6050 SGD! Nearly a tidy $1000 SGD loss which equates to around 14% of pain (going on quick math in my head).


No Natural Solution
We are moving into scary times I am afraid, the 1.4 comfort zone has been broken for the Singapore Dollar and it appears that the floor is moving even further away.

"Optimistic" - my goodness me this statement is sitting across a perversely fallacious place. This can't continue without a drastic effect on world economies, which for what it's worth are left with the following gloomy options:

[1] Assume a loss when settling in USD, no one does this for very long without changing the terms of trade.

[2] Move to a process of quote, tare-up and reprice techniques.

[3] Move to pricing on baskets (an article we will give justice to separately and in its own space).

[4] Move off the USD dollar to quote and settle between other more trusted cross currencies.

[5] Buying futures against physical contracts but we might be in for a long tenor of worthless USD and that game comes with huge basis risk, nothing changes there. The damage however is already done, futures won't save you. To be succinct, if you hadn't planned for future cover as of a couple of months back, then you are already out of the money today. In the end, firms will have no choice but to inflate prices when settling in US dollar.

[6] Some customers are looking to quote in ounces of gold! Oh yes the world of Ancient Babylonian trade might be where the future lies for cross-border transactions. I am not being silly, only today I was valuing a contract with a customer and they said to me - "what would that price be in something other than US dollar, say gold for example".

[7] Quoting in mean minor-cross positions has also come back into fashion. It's a simple idea of taking an average value estimate over a twelve month trailing position between two cross currencies such as AUD/SGD and then quoting relative to that position. You then settle in the cross.

[8] Exotic options and swaps are always considered when these problems seem deep seated.

Is there any hope in sight?

Well the thought of QE3 is that it will only press the US S&P500 equities index higher while main street tanks and when that bubble implodes, the retail investor will be stung again. But put this thought to the side for a moment, what happens after QE3? We are probably back in this same position again and the world will have to entertain a QE4, QE5, QEX for an economy that is theoretically digging itself deeper into debt?

If the US government misses a payment, it goes to D, Chambers said. That would happen right after August 4th, when the bills mature, because they don't have a grace period | Chairman of S&P

The question I have now is, how can Bernanke actually afford this unlimited QE addiction?

Either way a default or QE is only going to weaken the dollar further. Thinking about the Geithner resignation ploy might allow the US to escape the left hand of madness (article here) but perhaps he can sanely see the writing on the wall.
Posted by Causal Capital at 6:57 PM