Caveat Emptor : Basel III Conferences and Enterprise Risk, yes the two are being pushed together.

Let's be frank or at least a tad earnest, perhaps up front; Basel III has little to do with Operational Risk, period, goodbye, the end, thank you very much.  Yet, I keep seeing brochures on "Basel III and Enterprise Risk" or "How to make your bank Basel III compatible with Operational Risk" popping up like a congenital disease.

Caveat Emptor (buyer-beware) - If you see a brochure on Operational Risk and Basel III, don't entertain it. The heading is misleading and the promoters are trying to ride on the coattails of Basel III to sell their wares.

If one is to look at the authentic Basel III document, the label "Operational Risk" does not appear.  Not once.  Don't believe me?  Go to the link on the site for the Bank for International Settlements and download the Basel III Global Regulatory Framework adobe file, then search for Operational Risk.

BIS link for Basel III can be found by clicking here

There is nothing on Operational Risk which is of great importance in Basel III, two smallish paragraphs with the words "operational performance" appear but that is hardly worthy material alone for a two day conference.

What I am not saying
I am not saying Operational Risk isn't important but when it comes to the financial sector and Operational Risk, that was all addressed in Basel II - the predecessor to Basel III. Additionally, I believe a lot of banks across the global didn't really do Basel II properly or in many cases, they are running the Basic Indicator end of the program for fulfilling their Operational Risk requirements. None the less, if you want to learn about Basel III and focus on that goal, then you should leave Operational Risk discussions for another debate and definitely a different type of conference.

So why is this happening?
Well, we possibly have a shortage of risk analysts suitable for Basel III on one side of the fence and an oversupply of Basel II Operational Risk implementers on the other. In some cases the latter will try and cross the fence but they really should re-skill themselves on Counterparty / Credit risk and Liquidity Risk before leaping into Basel III.

This brings us onto another minor misalignment in the Basel III common consensus camp, which is; Basel III is not a replacement of Basel II and it should NOT be thought of as an upgrade ie moving from version-1 to version-2 and then version-3. This is the wrong kind of thinking and in the Basel case, version II and version III focus on different aspects of risk measurement. To be compliant banks need to complete Basel II end-to-end, including Pillar II and then substitute the capital, Liquidity Risk and Counterparty Risk requisites into their frameworks from the Basel III recommendations. 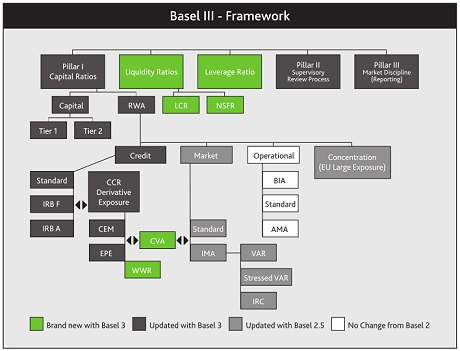 This paper from Moody's Analytic's really summarizes the Basel III scope well, you can view the Moody's presentation by following this link.
Posted by Causal Capital at 11:34 PM