A new monetary system has been debated by many an economist for some time however, now that the big central banks are starting to think about alternatives, we have to question whether we are on the brink of redesigning the world of floating currencies beyond Bretton Woods failure?

This article was stimulated by Mervyn King's speech from the Bank of England although momentum has been gathering around the topic of rethinking the role of the US dollar for a while.

How real could this be?

BOE and IMF
Back in March this year, Mervyn King the Governor of the Bank of England, delivered a speech titled "Do we need an international monetary system?" - BIS on New Monetary System speech can be found by clicking here.

His speech opens directly on the topic of trade:

If flexible exchange rates were allowed to determine the relative values of different currencies in competitive markets, why should there be any need to change "the rules of the game". Do we need an international currency?


Indeed, why is that so and the UK is not alone with this line of thinking, France has also selected this topic for the theme of the presidency during the G20 discussions this year.

The key motivation for rethinking the world currency for trade is based around the following concept: "one country's actions can distort the choices open for others".

As it stands the US dollar is currently the generally accepted currency for pricing and settlement however, over the last couple of years the world has seen a weak "floor-less" dollar drive many trade and social disorders.

The fragile state of the US dollar or perhaps its potential collapse, is in fact a deeper conundrum than simply the relative value in price differentials for the same goods across borders.

Annual output in high saving economies has expanded by 10 trillion, 1 trillion more than the growth in domestic demand of the same economies. The rise in output relative to demand in these countries was only possible because there were matching capital flows. In effect, capital flowed uphill from many of the emerging markets to advanced deficit economies and the deficit economies predominately the US, UK and the Euro have been borrowing almost $1 trillion dollars more each year. This has resulted in unsustainable paths for domestic demand, net debt and long term real interest rates | Bank of England

This subversive cross effect spurs on many unwanted economic issues which need to be kept in balance.

[3] With a suppressed manufacturing sector, developed countries are seeing a decline in manufacturing and consequently rising unemployment.

The arguments between the US treasury and the Chinese government over the weakness of the Renminbi or Yuan (whichever label you prefer to use) comparative to the US dollar, is fundamentally based around resolving this deficit issue the United States is suffering.

Mervyn's speech is without any doubt an interesting and extremely well thought through piece of work. The Bank of England doesn't seem to be simply playing with academic ideas here and it isn't the only central bank with these sentiments. A month before Mervyn's work, the International Monetary Fund also published similar remarks from its leader. Back then of course Dominique Strauss-Kahn's IMF speech was a turning point in thinking and that speech can be found here "Towards a more stable international monetary system"

From an IMF perspective or perhaps the Dominique Strauss-Kahn speech directly, arguments around the "don't fix it if it isn't broken" are in his opinion only partly invalid. He exemplifies that to have faith in the US dollar because it served the world during the global financial crisis is a falsity for the following reasons: Firstly, extraordinary international policy cooperation had to be enacted and Secondly, the recovery that we are seeing today is not the recovery we wanted. We have high unemployment, widening income inequality, global imbalances are back and worse than before the credit crisis, volatile capital flows and exchange rate pressures are all present. Rapidly growing excess reserves alone are sowing seeds for the next crisis in his opinion.

The similarities or overlap in concepts between Mervyn King and Dominique Strauss-Kahn are strong enough to indicate that at some point in the future, we are likely to endure a rethink of the world currency for pricing and settlement. We may end up in a better place but the transition won't be straight forward.

How real is this?

Central Banks Moving onto Gold
I personally believe the world of fixed income gives us a better long term view on global economic health but to stay with the currency argument here, it is becoming apparent that there are some very interesting dynamics in play. I take to highlight a few of these indicators below.

Firstly, if you didn't know anything about gold twenty four months ago, you'll find most people do today.  The value of gold on the world index against the US dollar seems to be an endless rocket to the stratosphere. This is driven by both a quantitatively weakened US dollar as well as an incredible appetite for the commodity.

This hoarding frenzy is also not entirely based around the Exchange Traded Funds domain that retail bubble lovers seem to fuel. Reserve banks the world over are going long on gold.

Back in 2009 the Reserve Bank of India made large acquisitions of gold from the International Monetary Funds limited gold sales program. This was an off market transaction for about $1045 an ounce and for India, Gold has become a safe store of value instead of the US dollar.

India is not alone and other Asian nations have noticeably been diversifying their stockpiles of foreign currency onto this commodity.  Many analysts two years ago were simply shocked by the move of central banks onto gold and at such high prices as we can see. However, now the value of gold is half as much again! Further, these type of transactions are actually not that common. The Reserve Bank of India was one of the first central banks to make the purchase from the IMF in nearly a decade but it won't be the last. 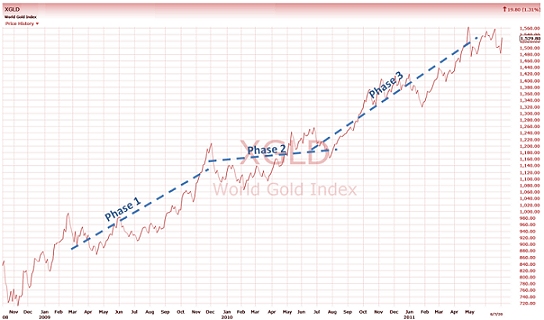 So two years on, this theme like the price of the commodity itself is continuing. In May, Mexico also increased its gold reserves with a 4 billion dollar bullion acquisition and well in the premium value space. Russia and Thailand are also on the buying path and China alone is now the sixth largest holder of Gold.

There is actually a dual play on gold here: If the world recovery is sharp then gold is a great hedge for inflation. Conversely if the US dollar fails, the reserve banks have already moved onto a physical asset of wealth rather than a fiat currency.

The US Debt Ceiling and a downgrade
The Euro is no better off. During the early part of the credit crisis the currency strengthened nicely as investors falsely believed that impacts from a collapsing banking system in the US were in some way ring-fenced from other economies. As we know, it soon became apparent that the Euro Zone, taking in Portugal, Ireland, Italy, Greece and Spain were also economic basket cases suffering from large debt overhangs. These overhangs are the very kind of disorder that Mervyn King is referring to in his BOE speech. 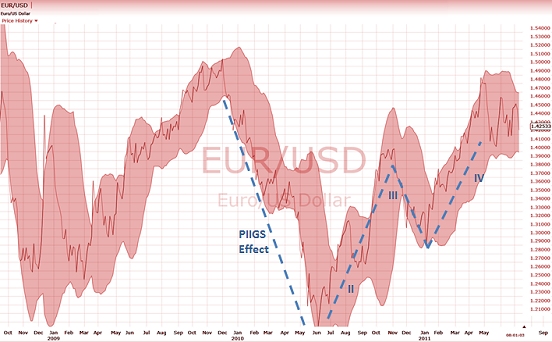 Comparing the Euro to the US Dollar is akin to comparing two falling rocks although people do it for many reasons. It is probably an inappropriate way of thinking however, if you are looking for an indicator on which state of nations or nation of states is going to save the other, thinking in terms of a recovery, you are being hopeful. One is as bad as the other and you profit from shorting which headache you believe is worse and going long something that isn't quite as bad. 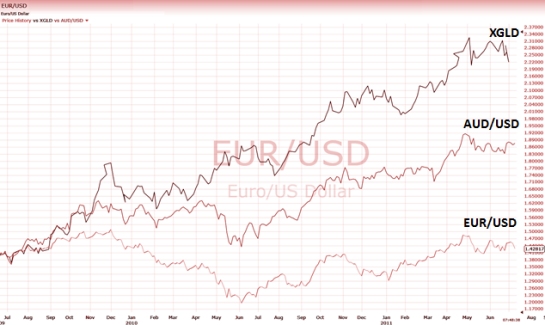 This dual falling sensation of the Euro and the US dollar is not so different to Parallax error.

This becomes even more apparent when you compare the change of the EUR/USD cross value with the delta cross value of another currency pair.  In the diagram above I have done such analysis and it is quite clear that gold is the best thing money can buy and the Aussie dollar is about half way there. This is a bit concerning, may be it's a sign of fresh change on the horizon but either way this trend can't continue. In the end, central banks will eventually move from talking about a new monetary system to planning one and then building it.

This argument is only one hypothetical future horizon and it is just as possible that everything might simply slide back to a normal range of trading but it doesn't feel like that this time round. In the next decade, the system is more than likely to come off the rails. 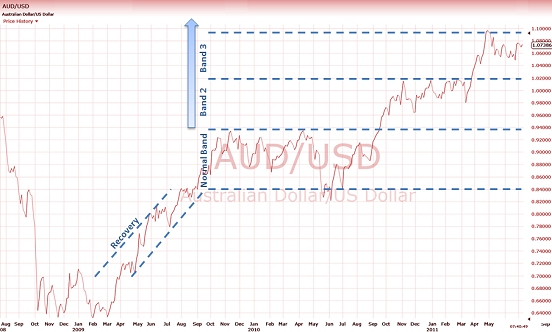 In respects to the Aussie Dollar, this has broken three major support levels. This is far from normal and far from where the Aussie Dollar normally trades. Statistically if this continues a regime shift is likely to be established and the resistance ceiling for the Aussie will take on the same shape and colour that gold has with the US Dollar, an outlier in the distance.  I don't believe we are going to break the upper traditional trading zone (band 3) the Reserve Bank of Australia would intervene before that time and then Australia isn't without its problems but that is for another debate.

In part II of this blog, we are going to look at how importers and exporters can effectively hedge against volatility of currency markets and what the collapse of the US dollar would mean to businesses current settling practices.
Posted by Causal Capital at 10:59 AM