When it comes to perspective numbers lie

When it comes to perspective, numbers do lie or to be concise viewpoints change even though the real value does not.

What I am talking about are reverse splits and in particular Citigroup's recent reverse split of its common stock.

Citi On Reverse Splits
For those investors that were holding Citigroup stocks and not paying attention to the news a couple of weeks back might have been delusional with joy, feeling instantly rich overnight when they logged onto their trading platforms Monday morning. It is all mirage unfortunately and the price might have changed but if you glance at the PnL, you'd realize pretty quickly that the value definitely hasn't shifted. 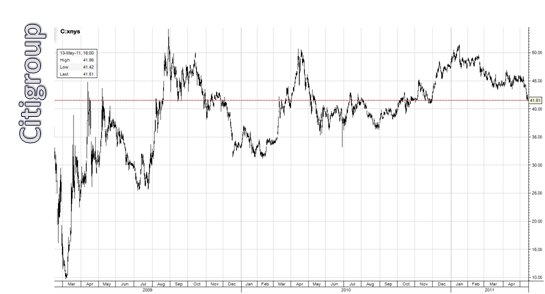 In effect Citigroup did a 1 for 10 reverse split of its stock on May 6th, which scales the previous price of $4.5 or so up ten fold into the $45 zone. Citi also paid a 1% dividend as a kind of proof gesture to the market that everything is back to normal, not that a dividend of this size is anything to be over excited about.

Why do list firms reverse split their stock
A reverse split is a corporate action, like a split but involves reducing the volume of stock and increasing the par value of each share unit. The volume of shares decrease in accordance to the increase in price however the market capitalization doesn't actually change.  A 1 to 2 reverse split for example would result in you having half as many shares but at twice the price.

So if the value doesn't change, why do businesses bother with this effort?

» Firstly if a share price drops too low a listed firm risks being delisted off the exchange, they are also often removed out of indexes and averages:

The financial downturn has definitely taken its toll on a lot of banking companies. Undeniably one of the worst hit was Citigroup. Now, it seems that the company’s disgrace is not yet over. The Dow Jones Industrial announced that Citigroup Inc will be delisted from the index. It will be replaced by Travelers Cos (TRV) in the flagship 30-stock index, starting June 8.

Since mid-January, the shares of Citigroup were already trading at below $5. In fact, it even dropped as low as 97 cents on March 5 after huge losses were announced and the government had to bail them out. Currently, it is estimated that taxpayers actually owns up to 34 percent of Citigroup. Who would have thought that this would happen to the world’s largest bank? | Credit Lending Blog

» The next point worthy of mention is that many mutual funds have internal policies restricting portfolio managers from buying "cheap" stocks, not that cheap is any representation of value as we can see here.
» Then of course there is the psychological dimension to it all.


The credit crisis impacted many banks including Citigroup which was seemingly left on the floor below the $5 dollar mark and that became an incredibly difficult resistance level to break. I am not saying Citigroup wasn't actively traded but that a psychological price ceiling had formed for this security.  Perpetually the media dialogue went something like "before the credit crisis Citi was trading ... and now Citi is still trading below five dollars", this doesn't doesn't help the firm break a broadly accepted stigma the market had established for it over the last twenty four months.

» On our point of actively traded, a cheap stock in price not value, is often a hunting ground for the high volume retail investor. They believe they can afford to dabble in something "a dime a dozen", thinking that their only loss will be a handful of dollars and Citigroup broke the New York Stock exchange record a couple of years back on trading volumes.

Citigroup has become the first US stock to post a daily traing volume in excess of 2 billion shares. The 2.67 billion shares changed hands on Wednesday, enough to break the previous 1.87 billion record set in February | Aug 2009 - FP Posted

One question that people pose is, will volumes be effected by this new price?

We believe nearly certainly yes because the penny stock syndrome is broken however, by how much volumes decrease is a debatable subject with many alternate measures. The big mistake of course is that some investors are comparing apples with oranges or in this case Dollar Volume (the total dollar amount being traded) with Total Composite Volume (the total volume of shares bought/sold/lent across all exchanges).

Are the Bulls or Bears on Citi?
So the big question everyone is curious about is, are we bullish or bearish on Citi?

On fundamental analysis the shares are trading around 0.93 tangible book value about the same as other comparison US banks which were bailed out. All that aside, there are other banks in the market which are trading around 1.8 PTBV and that makes Citigroup a good buy assuming all things are equal, but are they equal?

The end of year 2010 quarter was pretty poor for Citigroup with a weak 4 cents a share forth quarter or 1.3 billion. This is in effect a loss of about 7.5 billion (33 cents a share) and fell short of Wall Street analyst estimates.  The result as expected was a 6% drop in price as investors dumped the stock early on in January this year.

The bank said the latest quarter was hit by $1.1 billion of negative credit valuation adjustments as its debt spreads tightened, reflecting increasing market confidence in the banks health.  Excluding those losses, the latest quarters profit would have matched estimates | CNN Money

You have to laugh at the irony in such statements, it is like saying "apart from a few car crashes I had last year, I really am an outstanding driver - believe me, please"

So is Citi a good long trade?

I am not so sure, the banks revenue dropped 6% end of year 2010 yet on the upside, the bank has managed to repay the tax payers bailout. Trading Citi, well we have to give up swinging trading Citi below the $5 ceiling as that game has clearly come to an end so if you are to hold Citigroup stock now, you really need to be in the fundamental belief that these banks (Citi included) are going to have a strong year ahead in traditional banking business.

Let's look at it from another angle. If Citi was about collapse again in the next twelve months, then reverse splitting now is an excellent strategy to save the company. Why is that might you ask?

Well if the share price re-entered the $3 mark again Citi would more than likely be forced to delist off the New York Stock exchange.  More importantly, it is always much easier to raise capital in the future by issuing additional stock when your existing stock position is priced (not valued - remember the two are different things) in the $40 dollar zone.
Posted by Causal Capital at 2:26 PM

Email ThisBlogThis!Share to TwitterShare to FacebookShare to Pinterest
Labels: Investments