Managing oil prices is all about preserving margins

In volatile commodity markets, a firm's ability to profit comes down to one thing: The capability a business has to control the transference of market volatility to margin volatility.

In this article we are going to look at how rising oil prices seem to impact commodity consumers in alternate ways and why investors often misunderstand the impact rising commodity prices have on their investments.

It is commonly held belief that as oil prices rise, petrol companies rip everyone off and profit dearly, while airlines suffer incredibly. This opinion is over simplified and can often lead to incorrect investment decisions, how is that so?

MAINTAINING THE MARGIN
In short, if airlines are able to pass on unit cost increases or hikes in fuel prices and hedge the sales window (we will look at this concept), then a spike in oil prices over a short horizon should present a manageable hazard for the firm. This of course assumes that sales volumes are not impacted as costs are passed on to the consumer.

In 2011, some airlines to date have been able to maintain their margins even though there have been recent spikes in prices of crude oil.

At the other end of the game, refineries in the western world will see demand choked off when prices at the pump rise too quickly, this is because consumers change their buying habits.  In the developing world fuel prices are often subsidized by governments however, retailer margins can still be eroded because a dollar based endowment doesn't protect the margin in the same way as percentage payments do.

THE MARGIN GAME
A firms ability to profit is predicated in how it preserves its margin and there are several financial ratios that give us insight into how a business can measure this margin. Some of these ratios have been listed below: 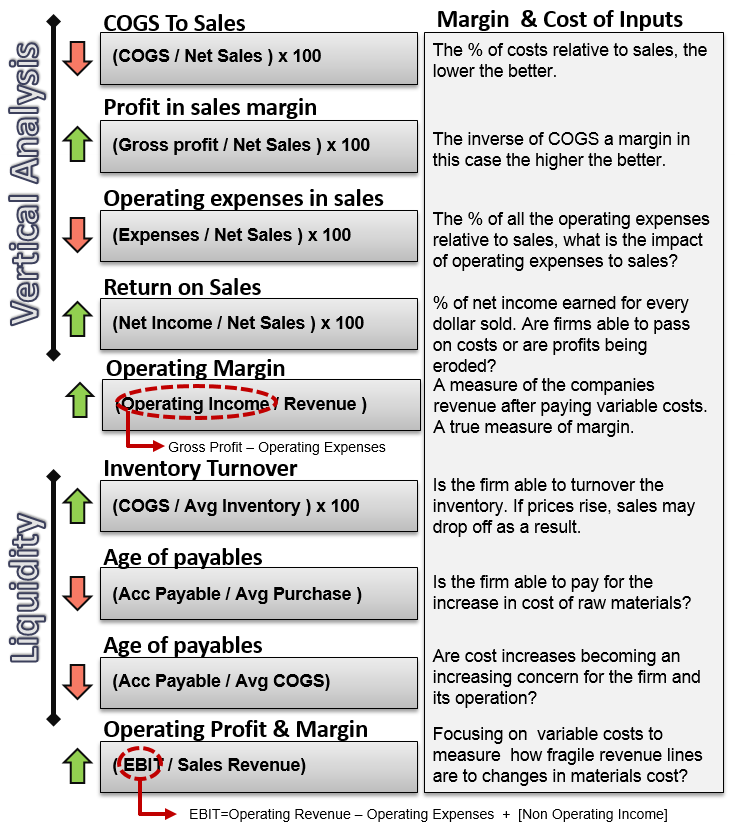 This margin game has to be kept in equilibrium and that can lead to interesting commercial dynamics.

Did airlines suffer from the recent jump in crude prices over the first quarter of 2011?

Airlines have pushed through several successful fair hikes this year, without dampening travel demand.  US Airways said this week that its traffic was up 3.9 percent in March, and its load factor was 83.4%, up 0.2% from the same period last year.  Books remain strong and the ability to pass along fuel price increases continues. | Reuters

So clearly some airlines seemed to have controlled their margins however, as we shall see later in this article, some airlines failed at this task. How about petrol retailers in Australia?

If the Aussie dollar had remained at parity with the Greenback, as it was at the start of the year, then motorists would be paying more than 11cents per litre to fill up, a 65 litre fuel tank would add an extra $7 to the bill. | AAP or Skynews

What about suppliers? High oil prices must always be good for the crude suppliers but while their profits are back, how long will that last?

Margin Control
Margin control is unique for each industry and each firm within an industry sector.

We are going to look at one general approach which might be employed by a business to reduce volatility in the margin components of its income statement. 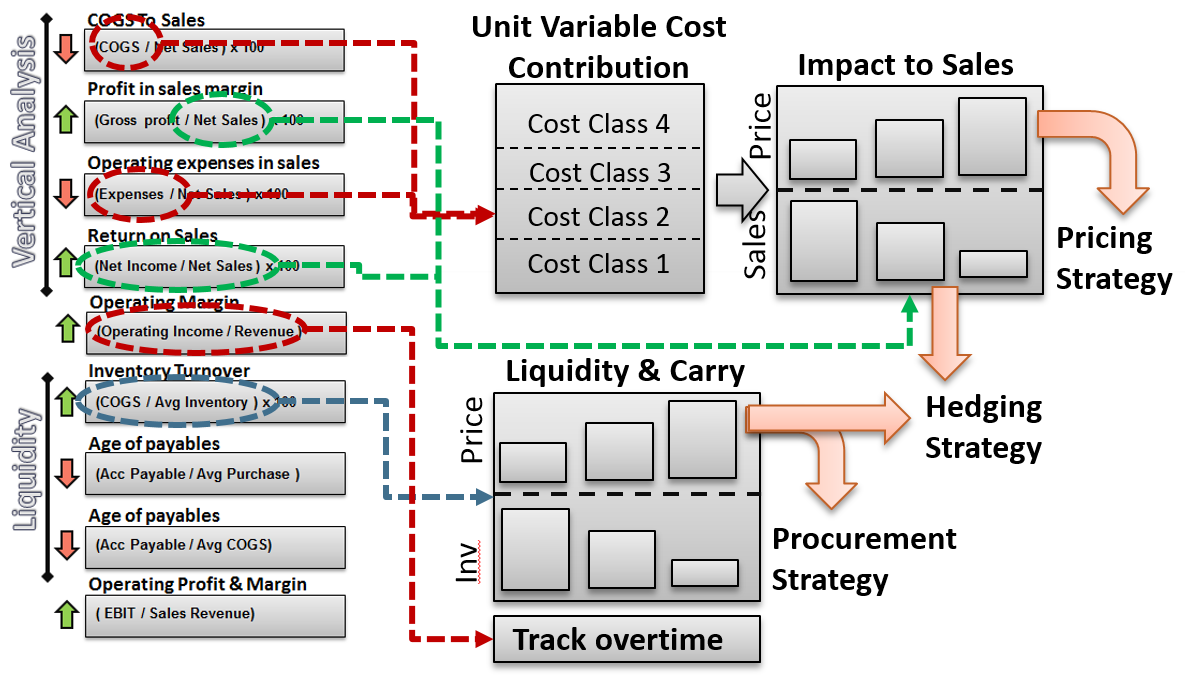 If you are not interested in supply chain finance, you might want to save yourself from verbosity affliction by skipping this section and jump straight to "The Investment Play" part of this post.

STEP 1 : UNIT VARIABLE COST CONTRIBUTION
Before a business can consider fighting margin erosion, it needs to dimension the "Variable Unit Cost Contribution of Production". This is the delta change in the price for any specific raw material used in production and the contribution that has to overall costs. The firm will then need to understand the impacts of a 1pt move for the raw material price against its profits, assuming no costs are passed through to the customer.

An analyst will normally initiate this exercise by itemizing each input and the percentage quantity utilized in production. A simple example would be to look at the manufacturing costs of a soft drink and its raw material inputs (water, labour, transport cost, flavouring, electricity ect).  If you were to take one unit of production capacity, you need to measure how much flavouring is used in that single unit? Then, you would consider the impact to profits if flavouring costs were to rise 1.5%?

This seems like a simple calculation however businesses have a tendency to procure raw materials today for future production. There are also economies of scale when purchasing large volumes such as 200,000 litres of flavouring, as that order may carry a unit discount in comparison to acquiring 20,000 litres.

STEP 2 : PASSING ON THE COST
After building up the complete unit cost contribution network for all variable costs, the business will then look at the impact of passing rising costs onto the consumer directly. Analysts do this pass through calculation by developing a second model which shows the impacts to sales volumes by passing costs into the price of the final products.

An excellent analyst will also correlate and fit the various floating curve functions between input costs and output prices so that they can define the sensitivity specific costs have on overall operating profit.  In some cases analysts will also engage in statistical exercises such as linear programming to postulate a set of cost / price scenarios to allow them to define an optimum margin banding that can be used to set prices.

STEP 3 : LIQUIDITY, CARRY, PRICE DISCRIMINATION
Most firms will extend the cost to price model further to understand scenarios of warehousing goods on both inbound and outbound inventories, financing to purchase raw materials through cycles of increased costs and the final impacts from price discrimination practices (a whole school of finance in its own right taking in the well known concept of buy one get one free) at point of sale.

STEP 4 : HEDGING STRATEGY
Finally and arduously (only one more step to go) the business may look at hedging costs.

There are various methods of doing this although, the most obvious approach is to purchase symmetrically opposite contracts in the futures markets.  That is, if you are short a resource today and will be going physically long on that resource in the near future, you also go short that resource in the futures market.  The outcome of this set of transactions results in flattening today the price you need to pay for the resource.  Companies may also engage in more traditional hedging strategies (yet more complex to price) which involve negotiating with suppliers on the quantity purchased and when or enter into swap agreements.

The Investment Play
Just reviewing our simple digression on margin control above, one can see the process for managing margins is far from straight forward to say the least. It also follows that some business are going to be better at doing this than others and these are the firms that present great investment opportunities when the price of raw materials are spiking temporarily.

We have built an airline portfolio below and shown the continuous price of crude at the top of the portfolio.  WTI and Brent have diverged in some respects over the last few months and many airlines are now moving their jet fuel hedging trades onto Brent. Obviously jet fuel is traded at a premium to the ICE-Gas & Oil contract however due to lack of liquidity for jet fuel contracts, airlines tend to hedge jet fuel consumption using fuel price correlation to crude. At present Brent has been tracking this trend more tightly than WTI and as it makes for a closer hedge, airlines are switching markets. [ICE Brent better hedge than Nymex WTI]

Most airline companies (including our list above) have seen their stock price impacted by increases in costs as investors fear the worst on rising fuel prices damaging profits. To be concise, when Brent crude broke that magic $100 a barrel margin threshold for airlines, airline stocks seemed to tumble [a]. Then before the Brent collapse [b], airline stocks made a tidy recovery.  All this aside, some airlines are doing better at managing their margins than others.

» United Continental Holdings lost $213 million on rising fuel costs in the first quarter, paying nearly $600 million more for jet fuel this year than it did 12 months ago.

» American Airlines posted a $436 million loss, with hedging strategies only saving $100 million of the margin.

» On the flip side, Ryanair does very well at managing its margin, revenue has risen 22%, traffic is up 6%, average fares have grown 15% and in the same token, the airline is 90% hedged out to the end of the year. Air France is hedged 14% for fuel costs for 2011 and about 50% for next year.

» Singapore airlines Q1-2011 results will be out this week and they are likely to be an interesting read.


On the operating margins three have been listed below:

What we have here is a very uneven playing field in margin strategies, yet stock price movements and depth of movement are relatively correlated. This presents a fundamental analysis opportunity for investors that read below the surface and directly at the margin ratios. If one compares individual stock technical trading patterns against these ratios, opportunities seem to become quite clear.

To round up, we have some airlines doing better than others however, when it comes to margin control that definitely appears to be the case.
Posted by Causal Capital at 5:12 PM