Progress on implementing the G20 Seoul resolve for strengthening global financial stability has recently been reported as being on track.

In this blog article we are going to look at what is being done by whom and when specific deliverables are due. This is a massive mandate for the FSB and simply due to the complexity or reach within the program alone, it chances on either being globally impacting or partly missing the mark.

The FSB & The Report

If you want to stay on top of how Basel III is being implemented across the globe, one place to watch is the Financial Stability Board's "What's new announcement list" - view it here. The FSB was established to coordinate the international intermediation of financial standards across the globe and its charter is broad and convoluted.

We need to accept that some of the failings of Basel II were an outcome of inconsistent implementation of financial standards between different national regulators, so it follows that one of the FSB's main objectives is going to be seen as bridging this gap between regulation and national acceptance. The FSB also tracks specific economic issues that arise from regulation and may develop recommendations which can be used directly by global regulators. The FSB is in effect an extension of organisations such as the International Monetary Fund or the Bank for International Settlements and it assists in ensuring their programs are implemented appropriately by putting pressure on national regulators large and small by reporting what they do.

Current Status
With the FSB goals in mind, I have to say the first G20 stability progress report is complex to say the least. It is an incredible mosaic of institutions seemingly tangled up in a multitudinous manifold of activities which is much easier to appreciate in the form of a diagram. 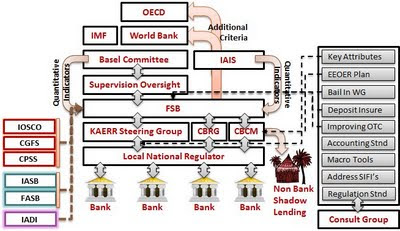 The number of regulators for various banking and finance activities is actually quite incredible. If you were to drop this framework above on top of the US regulatory system, you need to add the following regulators to the list:  SEC, FDIC, OCC, 12 member Federal Reserve System, DOH, NCUA, OTS, CFTC, FINRA - just to name a few.  With the regulator spaghetti ball on the table, the FSB Babel Tower might just work, assuming of course that it acts as the glue for global regulation and has the insight as well as the mandate to drive change. 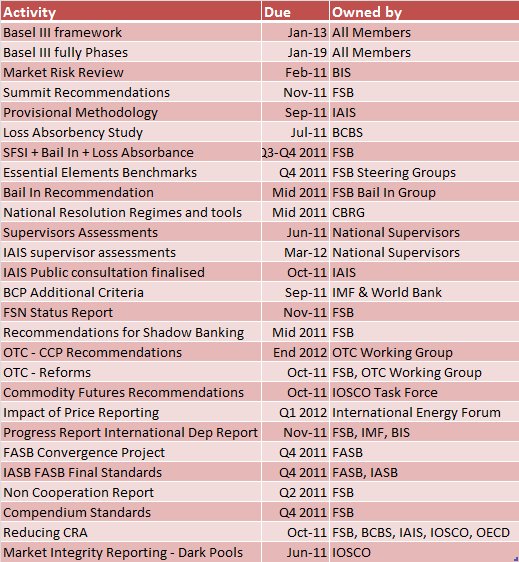 It is important to note that specific agencies are also engaged in other projects which might impact the global financial landscape.

Concerns away from the FSB
This is without any doubt a lot of work but will it be enough, will it be hard enough?

I would personally welcome a name and shame the regulator or bag the financial institution that skirts an appreciation to attempt to control risk professionally.  The Status Report clearly states that Australia is the first country of focus and that is an easy target to pick, Australia has a pretty progressive set of regulators and we can nearly be sure the next report from the FSB on Financial Stability is likely to be a shining light of example. All that aside, as we broadly move across countries in Asia and Europe, we are more likely to see lower quality of implementation of standards and massive diversity in approaches to regulation.
Posted by Causal Capital at 3:47 PM