UK Banks heading for another disaster

Unbelievable but unfortunately it appears that UK banks are heading for another disaster and so soon after the recent credit crisis took grip of the country.

It was reported by the FSA that UK banks have been hiding distressed retail assets on their books by forcing a restructure to the amount of 63% of their entire home loan portfolios. This is dire, perhaps one of the most serious pieces of news I have read for the last six months and it is right up there with the possible collapse of the US dollar. In this blog, we are going to take look at this claim and its potential implications for the British economy.


In the news | Bobsguide

The Financial Services Authority (FSA) - the independent body that acts as the financial regulator for the UK banking sector, stated instances of lenders extending mortgage terms and moving householders onto interest only loan plans which is now currently accounting for 63% of all home loans held by lenders.

According to the FSA, there are concerns some institutions may be seeking to reduce bad debts in order to make their own numbers appear more attractive.

The organisation said in a note: "We believe that there is scope for considerable improvement in firms' interpretation of the disclosure requirements." Customers could face adverse after-effects if forbearance is granted without properly understanding the overall impact the action would have, the FSA added.

The impact
To comprehend the seriousness of this statement 63% of all home loans have moved onto interest only structures, we will take a look at the differences between an Interest Only Loan (IOL) and a standard home loan.  When you compare the loan types side-by-side, the danger of the IRO restructure will become apparent.

STANDARD LOAN
In a standard loan structure, the borrower will make payments over the term of the loan, paying off the principal amount they owe to the bank but also the interest portion of the loan in a smooth fashion.  The further they move through the repayment structure, the more equity the home owner gains in the property. This is a result of the principal being paid off in each payment the borrower makes. In effect, the borrowers credit worthiness goes up with the bank as payments are being received.

INTEREST ONLY LOAN
With an Interest Only Loan, the borrower is only paying interest, they accumulate no equity in the property and when the loan comes to maturity, they are required to make a single lump sum payment back to the lender for the principal amount outstanding. This structure can best be represented with a chart which I have applied below: 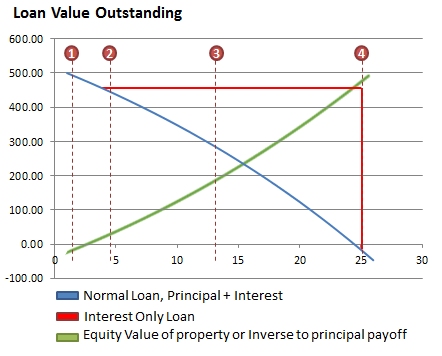 There are some subtle points to note with this diagram which need consideration.

Firstly, if the borrower switches onto an IOL at point 2, they will have only accumulated a small amount of equity in the property and the process of equity accumulation ceases as soon as the IOL comes into play. If the IOL borrower defaults at point 2 onwards and the property value has dropped in that time, the home owner may just find that they lose everything and still owe the bank money. WOW; this is an incredible risk for the borrower and for the lender.

On the other hand, with a standard loan, a default from point 3 onwards presents much lower risk to both parties because the borrower will have paid off a larger amount of the principle. Additionally, it is highly unlikely that fluctuations in property prices are going to be wild enough to erase the total equity value the borrower has captured over the time of the loan.

To put it simply, IOL's are similar to renting rather than buying and at point 4 in our chart, the IOL line shows that the borrower needs to payout the entire loan in one go. This is a huge obligation for any borrower and often results in economic stress for the home owner.

Imagine you have a bill due for payment next week which happens to be roughly the entire value of your home. For your average retail home owner, that is a big deal and one would hope they had been saving over the term of the loan to meet this obligation. If not, then the bank is going to repossess the property and sell it on the market to cover the entire principal outstanding.

In are dark case scenario, the borrower will end up with nothing except a small amount of capital growth in the property and that alone is predicated on property prices always going up.

Given this risk, good lending practice would follow that Interest Only Loans are only usually granted for investors who are buying a second property and these investors normally need to collateralize the IOL with an existing asset. Lending standards are weak if IOL's are being use for first home buyers, they are disasters waiting to happen when these instruments are being used to restructure non-performing assets.

In short of it, if the bank needs to restructure a loan which is about to default and they do this onto a more risky structure, it is equivalent to our lender taking on more risk simply to pass off a default today. Additionally, the bank pushes the borrower into a corner because the borrower can't restructure themselves out of the IOL once they are in it.

A borrowers perspective
Given these risks, why on earth would any borrower even consider an Interest Only Loan?

To answer this question we need to see the difference in the repayment value between the IOL and the standard loan. I have used the BBC's Home Loan Calculator to show how big that difference actually is. 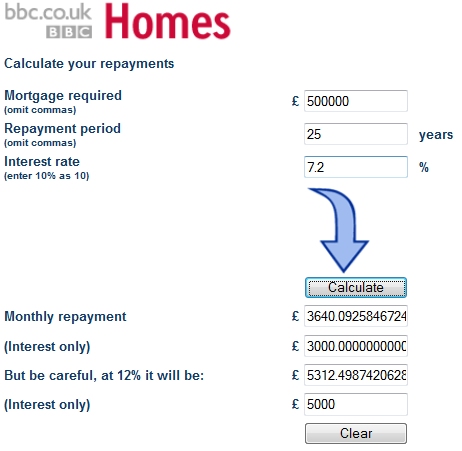 Say we took out a loan for 500,000 pounds and were paying 7.2% fixed rate, the monthly repayment (this is not a saving, IOL's don't have a saving component) is about 640 pounds difference.  Is that a big deal, well if it is, then the borrower is already high risk and it is quite probable that they will default on the IOL when it comes to the end of its term.

Concentration Risk
There is a bigger problem we have to consider with what is going on here. Say the bank has one IOL on their book or a thousand or ten thousand, this might be manageable but 63% of the entire loan book, my goodness me. This is an incredible statistic and I am worried for the United Kingdom, especially if these loans are clustered in maturity.

In ten years' time when the IOL's are due for final principal repayment, the chances of default are going to be quite high and many banks may end up flooding the property market with foreclosure sales as they attempt to realize cash to close off outstanding IOL contracts. This clustering of defaults and subsequent property sales could drive property prices through the floor, increase bankruptcy costs and enhance the loss for both the bank and the obligor.

In effect the banks are putting off what is broken today for a bigger problem tomorrow, they are also exacerbating the loss value.

Given the FSA has this knowledge, "there are concerns some institutions may be seeking to reduce bad debts", it would be prudent that an investigation into the depth and breadth of this problem is quantified.
Posted by Causal Capital at 6:14 PM