Black swans or to be precise, living with them is an interesting discussion that Nassim Taleb and Richard Herring have captured and published on the internet.

There are some valid and fascinating points from this chit-chat that I believe are worthy of embellishment and that is what I have taken to do here in this post.

The original discussion can be accessed by clicking this link.

Please accept the points below are my own take or interpretation on the main discussion transcript but none less, elaborating on specific key topic aspects of the Taleb/Herring debate has been a relatively discerning exercise for me so I decided to share these thoughts on the Causal Capital blog. 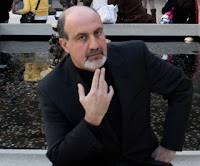 In the world of risk and markets, Nassim Taleb is a bit of a celebrity. Although he probably wouldn't appreciate that characterization, he has definitely become immensely famous and it is possible that the term "The Black Swan" will have a deeper, although often misused meaning.  Not everything that is probabilistically driven and extreme is a Black Swan. As severe as it was, the recent tsunami in Japan is not in my opinion a black swan, why?

Japan is recognized as being seismically active with a reported average of 1500 tremors a year, how can another event although rather colossal be a Black Swan.  It may become a Black Swan if this single occasion is game changing, will that be the case? Perhaps, may be not. Given this unique cause/effect led to a nuclear meltdown of the reactor(s) (who would truly know how many) in the Fukushima Power station, world opinion towards nuclear energy may shift. If the event drives a regime shift then we have ourselves a Black Swan. Fukushima may for example be the trigger for the demise of nuclear power and in Germany it is certainly an exacerbating factor for a rethink in energy policy.

All that aside I hear about enough black swans real or not in a single week and from various people, that one really must conclude that the world we inhabit is a pretty volatile place. This brings me onto my next point from the Taleb / Herring dialogue.

Volatility is not a bad phenomena
Is volatility a bad thing?


Herring: There is nothing worse than having a calm steady market if you are a volatility trader.

Taleb: Exactly. If you are a volatility trader or if you long an option. The first thing that determines the value of an option is not the spot price -- the underlying price. It is the volatility -- particularly when the option is remote. Uncertainty benefits an option | Knowledge @ Wharton

They are right of course, lets examine the normal standard Black-Scholes pricing approach for a European call option assuming the flaw in "normal" pricing, just for the sake of it and if you read The Black Swan book you will understand the fault in this formula. 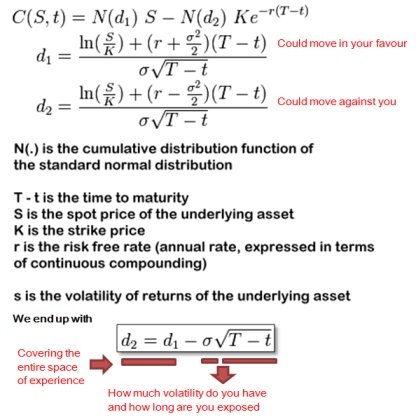 In the end it all comes down to our position (the strike) against the terrain (the spot), the length of time of exposure and the volatility.  Time / volatility together is fascinating and depending on which side of the payout function you sit, sometimes a scary place to be.

Volatility can mean many things to different people, it can be the change of uncertainty for delivery, rain, sunshine, shakes and quakes or in most cases simply the price we have to pay or receive for something we want. Its all contingent on what you are trying to achieve and the positions you want to avoid, ie paying too much tomorrow for what you know you will need today.

So what's the point?

Well we need to accept volatility. It is an expected aspect of our universe and an outcome of change, seasons and flow but as humans, we try to expel what is natural and falsely believe that we can in some remote manner remove volatility from our markets and even our environment. I find partial buffoonery in the statements of politicians in particular and some regulators who try so hard to extinguish volatility and actually announce that quest. It really is quite tragic and absolutely vain to believe that we can engineer a blue sky everyday when in reality that is unlikely to be the case.

I suppose this brings us onto the next point in this discussion.

A little bit of turmoil builds resilience
Why is experience so important?  It's simple, a farmer who has seen a drought knows what can be done to minimize the impact even though he wisely accepts he can't control the weather.  It is all about a bit of pain today to prepare for the extreme event tomorrow or to put it differently; you can have a practice run on something that won't take you out and learn what to do when you are presented with that momentous occasion further on down the road.

Bailouts don't help us achieve this end, they are that "get out of jail card" and the corporate cancer that broke the financial institutions during the credit crisis has become entrenched. Risk managers or certainly the ones who fail and remain unchanged, seem to become embedded into the underlying problem and can pose a greater threat to the systemic wellbeing of banks than if they weren't on watch at all.


You give someone a little bit of poison and they get stronger.  Economic life gets stronger not with bailouts, but with bankruptcies.  Evolution works not with bailouts - there are no bailouts in nature -- but with competition and natural selection | Nassim Taleb

But to the dismay of the public we did bail out the banks and some of these zombie institutions are still here today doing what failed them yesterday.  As well meaning as it is, some regulators also introduce new mandates to address these discombobulations of the past. It's as if we are trying to preempt the catalyst for dysfunction but all we are doing is addressing yesterdays issues not tomorrows.  We end up behind the curve firstly, secondly we hold onto that broken fragile framework which wasn't resilient in the first place and thirdly, we change our terrain which introduces new points of failure in what we need to accept is a constant background of volatility.

Don't predict the catalyst
The Fukushima reactor meltdown was not directly caused by the earthquake or the tsunami. The closest proximity to the nuclear moment was actually the failure of cooling systems due to a loss of power to water pumps and all because backup diesel generators were situated in a flooded basement. The system wasn't resilient in the first place as there was always a resident pathogen in play waiting to be triggered. In this case the trigger was the tsunami but it could have been a different kind of flood, in fact thinking outside the square, if the diesel generators weren't a dependency for cooling in the outset, this would have been a null event.

What we have here are resident pathogens, dependencies, payoffs, volatility, time and we were short of options that give us a natural solution to an outcome not a cause.

So why don't governments, corporations, banks, power stations increase their range of outcome optionality?  Well one of the issues is that analysts often look at risk incorrectly when they do so with probability. Mind you, some of these organisations don't even use maths and misunderstanding probability is a major flaw in corporate strategy.


Fooled by Randomness
People are fooled by randomness and no model predicts the future. The best models can only predict the probability of the future, be that a future horizon in credit, market or operational risk. 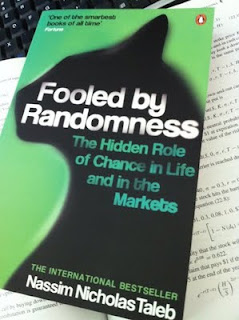 The probability of the future is not to be mistaken for the future even though some people try to wish that it was. It is at best a measure of randomness, a possibility and nothing is inevitable forever or improbable to times end.

When someone is told in a positive sense for example that there is a 90% chance of a deal coming to fruition, they may loose everything by channeling too much of their resources towards that single end.

This seems obvious however so many people fall into this myopia trap and there are some subtleties that need monitoring with caution when looking at probability related business problems. Here are a couple:

[1] The more we gear resources to an event, positive or negative, the higher we increase the intrinsic leverage and if we are borrowing to fund that game, the investment potential has additional costs of usury plus the investment margin. In short, we become exposed more deeply to the time / volatility function we described above.  Say we have a 10% chance of loosing the principal or $100,000 and a 90% chance of yielding a million (assuming a binary payout on winning the deal), the moment we apply more resources to the sales effort, the greater we increase the downside.  Double our investment and we take the probability of loosing 100,000 up by around twice, this makes logical sense and it is simple math, double the investment and double the losses but do we increase the upside?

This double or nothing estimation is most likely to be utterly wrong - why?

[2] The assumption is predicated on subadditivity in the investment function. Many investments are internally correlated so we could end up loosing more and while this is straightforward to comprehend, internal correlation is often overlooked.  Also, when we channel resources from one investment towards another we increase the leverage in that deal, we also carry opportunity cost and reduce the probability of success in the other deal(s) we have taken the resources from.  Everything in life tends to be interlinked but it never seems to be modeled this way.

Now I haven't read the book Fooled by Randomness because 2011 has been a bit busy, the Black Swan; yes done that and massively enjoyed it. Fooled by Randomness (photo above) was a gift from my darling wife and it certainly is overdue for a peruse.
Posted by Causal Capital at 2:13 PM