The affront on rating agencies
In 2006, the Securities and Exchange Commission passed a Credit Rating Agency reform act which was to stipulate a set of guidelines to determine which rating agencies can be classified as Recognized Statistical Rating Organisations and to guard against conflicts of interest, the act can be found by following this link.  Given the outcome of the Credit Crisis in the backdrop of this act and the role the rating agencies played in masking risk across a whole range of assets, not to mention the credibility of the credit assessment process itself, the act might be deemed as being ineffective. I fair the issue was more likely that the SEC ruling was simply passed into law too late in the day and the Credit Crisis was already underway.

None the less, the US regulators aren't letting go of this.
On March 3rd 2011 the SEC proposed rule amendments to the Investment Company Act which will result in the potential removal of references to credit ratings in investment documents for new securities that are issued. Credit Ratings are obviously considered by investors when they evaluate specific securities for an investment however, the new ruling proposed by the Dodd-Frank Wall Street Reform Act is going to require each regulatory body to review its guidelines on how market participants may refer to and use credit ratings for single point of assessment for creditworthiness.

"The focus of these efforts is to eliminate over-reliance on credit ratings by both regulators and investors, and to encourage an independent assessment of creditworthiness" | Mary L. Schapiro

If the SEC have their way, then it is possible that an assets' ratings would no longer be a strict reporting requirement at all for determining permissibility of a security that is sold.  These rulings are still under review so we'll see where this goes but it certainly isn't looking promising for the rating agencies. As for the Bank for International Settlements in respects to the rating agencies, well they are done with them.

"The measures include requirements for banks to perform their own internal assessments of externally rated securitisation exposures ... incorporate key elements of the IOSCO Code of Conduct Fundamentals for Credit Rating Agencies into the eligibility criteria" | Basel III

Most of these credit rating agencies have actually implemented and met the standards set out in IOSCO Code of Conduct but there is more to come, further on in the Basel III brief things become a little more sticky especially when Basel III starts stipulating eligibility criteria.

"The individual assessments, the key elements underlining the assessment and whether the issuer participated in the assessment process should be made publicly available" ... "Its assessment methodologies, including the definition of default, the time horizon, and the meaning of each rating" ... "the actual default rates experienced in each assessment category and the transitions of the assessments such as the likelihood of AA ratings becoming A over time"   | Basel III

Okay guys the gravy train is over for rating assets which involve payback of some kind but transparently "key elements underlining the assessment" now need to be disclosed. Surely this is going to give the game away for the rating agencies or is it?

The Basel III accord places emphasis on these rules at the securitization end of the business rather than through the whole pipeline where ratings are used, actually to be frank though; Basel III does state unequivocally "banks should assess exposures, regardless of whether they are rated or unrated"| Basel III. It is scary to think that a bank wouldn't assess its exposures but apparently that does happen from time to time. 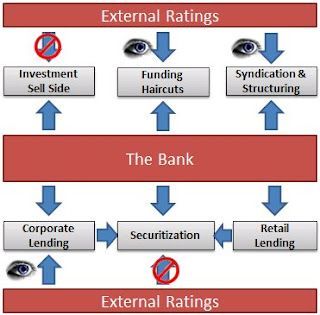 But wait hold onto your seat, there is still more pain to come for rating agencies as the European Union is also going to be releasing its new rulings on the use of ratings in the market. It's effort is to curb the take up and dependency European banks or investment houses have on these external firms for grading the riskiness of their portfolios and more information will be released later on this year from the European Executive Commission. | Reuters [Follow this Link]

Some of the impacts
The impacts of course will touch all aspects of the banking and the financial sector itself, rating agencies are going to have to change some of their practices and they are likely to build an entirely different model for banks when working in the securitization domain.

This all has to be a good thing - yes?

Well perhaps not so, nanny state rules have problems; the US Securities and Exchange Commission's Rule 17g-5 was meant to increase openness among rating agencies but it has introduced a system so formal and regimented that both raters and issuers are scared to speak frankly about transactions. | Reuters [Follow this link]

It is becoming apparent then that hard line ruling may not be the right approach here however, I do have hope and faith in the Basel III method of handling the rating agencies. I have taken to list four key points from Basel III which are intriguing.

The individual assessments of rating agencies should: 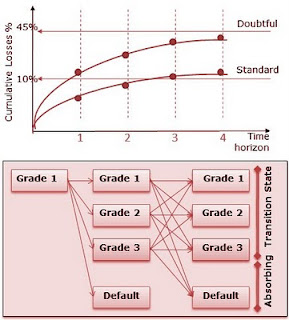 Point [1] Disclosing the full definition of default and its time horizon will allow some consistency across the rating industry to be set in stone.  It will also furnish banks with information on how to calibrate the time series in their models when they use ratings.

Point [3] sets boundaries on what a default rate translates to and point [4] will allow banks to curve fit and backtest ratings against actual default experience.

Basel III even uses the words "transition matrix" in its ruling, this is a finer point but profound.  For those that are not familiar with a transition matrix, I have taken to show a hypothetical example here in figure 2.

The transition matrix explains how a contract, issue or asset moves towards default and in our example it is more probable that a grade 3 issue will default than a grade 1 issue. This is straight forward stuff but a transition matrix is not only good for describing the general path to default, it also follows the down-grading style which is consistent with the way in which rating agencies publish.

What is even better for banks that use ratings in a transition matrix, is that they can convert the transition matrix into a Markov Chain and that will allow them to grade all assets in uniform manner.  Even more exciting, oh yes there is more, is that banks can combine Markov Chains in a Non Parametric Manner with option theory to price default of assets. They can also compare the MCNPM option price to the value of the spread of a portfolio of assets, sounds a bit tricky but it will allow banks to confirm levels of accuracy within the individual rating classes themselves. Now that is nice.

Finally if we look at our Basel III point 3 section, it stipulates: "The actual default rates experienced in each assessment category are to be published" - If this information is available along side the ratings, then a bank can investigate the probability vector of each row or column in the transition matrix and the bank can do this against both the time horizon which is now fixed and the actual default rate experienced in the market.

So what I hear you ask?

Well fundamentally this would enable banks to carryout a full backtest of ratings directly. This is about as good as it gets, transparent and backtested ratings. The big question of course is, would the rating agencies really want to allow for this?

"Rating Shopping leaves the agencies with a dangerous incentive to be liberal with their coveted AAA ratings and it leaves investors unsure if that AAA rating is authentic or the result of a prolonged shopping spree" | Mary L. Schapiro

Rating agencies are an important aspect of the investor community, they are detached from the internal banking processes for grading assets and are consequently non-biased, well they are as long as our Mary Schapiro "Rating Shopping" game isn't cranking on in the background.

>When reading about the impacts from the SEC 17g-5 rule on conflicts of interest and hearing the market complain about recent SEC rulings, we need to ask ourselves whether rating agencies should be relegated to a lesser place in the credit analytic process or replaced at all.   SEC 17g-5 shouldn't have caused so much disruption but as straight forward as it was, the game plan changes and so does peoples behavior.

Perhaps what would be ideal for financial institutions, investors at large and the rating agencies themselves, is to set ruling to enforce a statistical confidence to be tagged against the rating process just as our Basel III Transition Matrix is moving towards. We certainly should know by now that hard line laws in a complex market seem to have unwanted backlashes.
Posted by Causal Capital at 5:29 PM