A few months ago, when I first reviewed the Basel III guidelines, I was relatively positive about the proposal. Sure it is difficult to achieve in places but more or less on the mark. The credit crisis needed a global regulatory response and as heavy handed as it is, Basel III appears on the surface to address the causal factors for the collapse of the markets in 2008.

There are a lot of fears over Basel III which have been voiced by quite a few risk analysts across the planet. These concerns mostly revolve around the following argument that a strict rule is a linear or straight line concept that may not fix the banking system but may dampen economic growth. Yet, if the regulation is not strict enough, it won't be effective.

This interpretation of the ideal behind Basel III is incorrect in my opinion and is driving the banking community to act in a regulatory discordant manner.

In this article we are going to review a couple of concerning eventualities that seemed to have occurred as a response to Basel III. We will look at these concerns from the perspective of the banks and the regulators.

Capital
One of the new requirements of Basel III is to clean up the capital tiers that banks use to reserve against loss.

The reforms raise both the quantity and quality of the regulatory capital base, tier 1 capital must be common shares and retained earnings, tier 2 capital instruments will be harmonised and tier 3 capital to cover market risks will be eliminated.

HYBRID CAPITAL DISBANDED
Hybrid capital which consists of mixtures of debt and equity or more commonly debt with a convertibility optionality has been disallowed in the capital tiers of Basel III. In Basel II the ceiling on hybrid capital only ever endorsed a 15% limit of the total capital amount yet, disbanding hybrids is still going to be frustrating for banks. The reason for this is that the instrument allows a bank to raise capital and also to tax deduct relevant interest payments on the structure.

BAIL-INS
Bail-Ins are a direct response to the credit crisis and are to be seen as a stop gap before a stressed bank has to either be liquidated or bailed out, the opposite to a bail-in. I am going to elaborate on Bail-ins for a moment because a lot of people have asked me about them, however they aren't the feature of this article.

Banks have a unique problem unlike many other industries which is exacerbated by transparent and fair accounting rules.  When a bank reports that its capital ratio is dropping, there is a tendency for depositors to withdraw their funds. In addition to this, haircuts for short term borrowing tend to rise adding to the capital stress and eventually a liquidity funding dilemma for the bank.  A bail-in puts on the breaks for this hazard as it allows a bank to physically restructure its balance sheet.

In effect the creditors agree to a restructure, the distressed assets and equivalent equity value of the bank are bundled up and written off, the shareholders are then issued warrants with attractive terms and debt is drawn down by the bank in various structures of subordination. Some strips of debt may be converted into equity to restore the capital adequacy ratio, while other tranches remain as senior unsecured loans to fund the banks operation.  This sounds a bit like a hybrid to me but we'll leave that argument alone for the time being and avoid discussing this digression.

Even though substantial work needs to be done on the process and structure of bail-ins, these new capital rules are game changing and Basel III is definitely travelling in the right direction.  Mind you, these new features are overlooked by many analysts and even regulators are criticizing the Bank for International Settlements for not setting the capital reserve floors higher. The FSA is one of those groups of people:

This is a misconception in my opinion. Basel III focus should not entirely be directed at capital and many Basel III critics are overlooking how the Liquidity Coverage Ratio (LCR) and the Net Stable Funding Ratio (NSFR) work inline with the capital tiers to make banks more resilient. Then of course we have our bail-in proposal which we have already discussed. This Basel III renouncement is understandable and in the past the stability of a bank was generally measured purely on the sum of its capital tiers divided by its Risk Weighted Assets. However, the credit crisis has told us one thing, that undoubtedly capital problems are part of the problem not the solution. 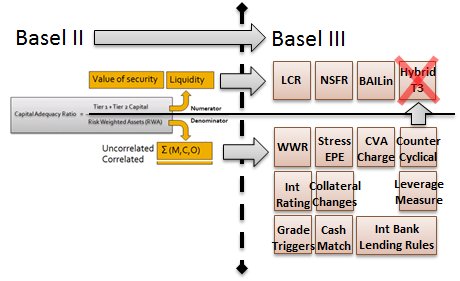 Figure 1 : New Rules for Banks
The entire Basel III loss reserve shown above can't really be compared to Basel II, it just doesn't work the same way and capital should not be considered alone. Exclusive by itself, the capital floors have been strengthened, lifted and yes; the FSA is right, the absolute value number hasn't increased considerably but taking all components operating together as one complete framework, makes the banking system a lot more resilient.  The FSA should stop looking at the capital floors but the big picture.

In part 2 of this article we are going to look at some of the issues with liquidity ratios and the Basel III ruling.
Posted by Causal Capital at 12:54 AM