In our first blog article on catastrophes and Extreme Value Theory which can be found by clicking here, we looked at methods for predicting outcomes from climatic events. We are going to follow up in this post with a review of structured products that can be used to provide financial cover for losses caused by weather and other environmental predicaments.

On the 9th of March, Dow Jones News reported an announcement from Arnon Musiker, a Fitch Ratings director, that firms which do not prepare for catastrophe may find their ratings will be downgraded.

You want a prudent level of hedging such that if weather patterns go against you, you can still cover your debt service and other financial obligations

Arnon is referring to Australia of course. Mind you, only two weeks prior to Arnon's statements, the federal government of Australia considered "forcing" state governments to take up disaster insurance to qualify for reconstruction funding.

There would have been no need for the levy if Queensland had taken out the appropriate insurance before the floods and cyclone Yasi ... If I support this floods levy, I want to make sure this is the last time Australian taxpayers have to pay a disaster levy

The big question here is, should disaster insurance be the final vehicle for funding clean up costs from catastrophes?

The problem with disaster insurance at a state and government level is that the cost can be so steep that no single firm can underwrite the risk.

Another solution is for insurance firms or governments to cover catastrophe risk by selling Catastrophe Bonds or Cat Bonds as they are often referred to by the industry.

Options for Insurance Firms
When insurance companies underwrite risk for a large potential event, however remote, they need to guard against insolvency from the probable payout and they do this in three ways.

CAPITALIZING THE LOSS
The first way is to capitalize the loss which inherently results in the insurance company holding onto liquid investments such as bonds that can be dumped quickly on the market to provide cash to fund a claim payout.  In Japan, the insurance industry sets aside about 90% (JPY 1,173 billion at the end of 2009) of its insurable exposure in an earthquake risk reserve. This is well above its solvency capital line and allows Japanese insurance firms to draw down from the reserve to cover claim costs.

RE-INSURANCE
Traditionally, insurers would use reinsurance contracts as a means to transfer risk. This in effect is the same for the insurance company as it is for the policy holder, where the reinsurer will charge a premium to indemnify another insurance company (the ceding insurer) against all or in most cases just part of the loss.  Obviously, if an insurance company transfers all the risk, it isn't taking a risk position in the market and its profits will be meek.  At some point the insurance company has to take risk to enjoy earnings.

CAT BOND SOLUTION
The problem with capitalizing losses and re-insurance, is that the industry as a whole hasn't really transferred risk for massive catastrophes off the communal insurance book. The ceding insurer may also find that re-insurance premiums are too high or the market is not deep enough or liquid enough to transact enough of the exposure off its own book.

The Cat Bond is a solution for these problems.

Cat Bonds or Insurance Linked Securities are classified as fixed income securities that pay an attractive consistent yield to investors but with the proviso that should a stipulated event occur, the bond holders will suffer a loss in some of their coupon payments or depending on the severity of the event, the entire investment principal itself will be foregone.

The risks that Cat Bonds cover are in the natural disaster end of the spectrum of events and they include volcanic eruptions, earthquakes, hurricanes, fires, storm damage, floods and droughts.  In some cases other risks caused by man and mortality may also be transferred to the market through a cat bond however, these insurance areas are generally not securitized.

Understanding the Cat Bond
Cat Bonds are interesting; in effect they convert insurance risk into credit risk and consequently they need to pay yields greater than the Risk Free Rate to make them attractive for investors. In most cases the default risks of a Cat Bond can be directly linked to a specific contract or a portfolio of catastrophe insurance contracts, where the total premium of the portfolio is nearly always higher than the Cat Bond yield spread. In the end, insurance firms need to capture some of their margins and they do that by absorbing some of the underwritten risk rather than transferring the entire premium out to the market.

The insurance firm will either use an established Special Purpose Vehicle or create one to control the securitised market end of its business and it pays into the SPV a premium which is passed through to investors as a coupon.  The SPV might also acquire an interest rate swap (although it is not common to use interest rate swaps) that matches the maturity and coupon structure of the cat bond strips. The interest rate swap protects bond holders from interest rate risk which may occur if interest rates rise and erode the Risk Free Rate / Cat Bond Spread. In the end, investors generally want to speculate on the pure exposure of a catastrophe rather than worry about the volatility of interest rate markets and an interest swap can protect them from this occurrence.

Investors actually have several returns from the investment: 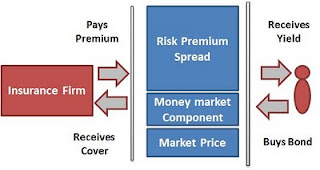 The Cat Bond coupon comprises a yield against the probability of the catastrophe but it also has a market price which will move as the investor community changes its perception on the value of the instrument.  This is especially the case for Cat Bonds which seasonally adjust in value due to cyclical active periods of stress, falling as the calendar moves into a potential period of storms and rising when no storms are realized.  A bond investor watching the market closely against this seasonal calendar can benefit from entering into and off Cat Bonds at the right moments.  The only difficulty however is that some cat bonds are not liquid enough to allow for the daily swing trading of them. 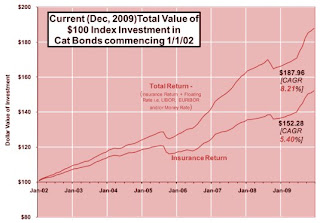 Over the last ten years, returns from an investment into Cat Bond funds has shown excellent performance. The majority of Cat Bonds have an average yield greater than 8% per annum and in some years, Cat Bond investments have returned over 10%. See the publication by Line Financial LLC.

The Cat Bond Market
The total value of the Cat Bond market alone has more than doubled since 2006 and there are now numerous investment schemes available to investors. 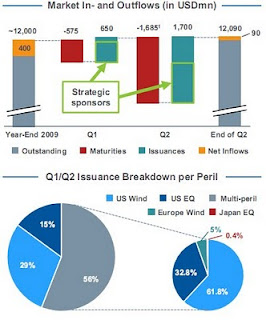 In Q2-2010 there was nearly a perfect match between Cat Bond suppliers and liquidity from maturing transactions however, much of this liquidity (70%) was provided by strategic sponsors who control the market.  In the US market most Cat Bond insurance is covering damage from wind or hurricanes and secondary market spreads are occasionally noticeable.

More information can be found at Munich RE - Insurance Linked Securities.

The US completely dominates the entire global Cat Bond market by taking up at least 60% of the value of the total global market, Japan is a mere 10% and Australasia doesn't really feature at all. All this aside, if the federal government of Australia draws a hard line on demanding state governments takeout catastrophe cover, then this trend is likely to change and Australia would be wise to move squarely into the insurance securitization market.
Posted by Causal Capital at 3:19 PM