It is a tragic end to the year for risk management in banking where the regulator's fascination with Risk Comparability and Risk Framework Uniformity has reduced banking risk management solutions to nothing more than Risk = BCI x ILM.

In a late December publication involving a high-level summary of reforms (late enough in the year that many bankers are now likely to be consumed with too many distractions around the year-end jolly to care), the Bank for International Settlements sets up three lame agendas for the year ahead.

One thing to always keep in mind, not all new regulations will end up being a step forward in the evolution of risk management, and in this case, banks are going to need to put regulatory guidance aside and develop their own risk management practices.

Let’s deal with operational risk today because this BIS document is a catastrophe in the making and the new dialogue under operational risk alone is a most disappointing read. Any operational risk manager with their integrity intact should be nothing less than amply shocked, but the good news is, you won't have much to do to become compliant.

This is, and we have to keep it real, but this is fictional drivel. Even if the claims put forward by BIS were true, it’s a terrible excuse for eradicating the risk capital programs that underpin Chapter V of Basel II. You can download the BIS publication from the following [LINK].

Banks Operational Risk frameworks have been in the throw of evolution for more than a decade and a half now, and to exit stage left in such a manner is disrespectfully heinous towards performing risk managers in banks. Let’s be clear for a moment; banks didn’t fail in the Global Financial Crisis from operational risk capital shortsightedness.

The proposed replacement for what currently exists is a downgrade of existing regulation that is going to have repercussions later on. Even if this rubbish is not the cause of operational risk capital failures down the road, BIS will be blamed for it and rightly so when coherent improvements exist.

For the lazy banker, well thumbs up because all you have to do with operational risk capital is the following, wait for it, the pain will only take a moment ...

Develop a business indicator consisting of a cauldron that throws in a mix of interest rates, dividends and lease values (what the hell has any of that got to do with operational risk is ummm not from a domain of causality). Then and you are not going to believe this, but you take this ridiculous interest rate mix of numbers, apply them across a bucketing system and OMG, multiply the result by your average loss value for ten years. Okay, what a load of tripe !!! but for the sake of making the number really big, times the outcome of the op risk mixing cauldron by the magic figure of fifteen ~ LOL ... Sorry but this isn't credible and I have to laugh, let me cut and paste the BIS posting otherwise no one is going to believe me. 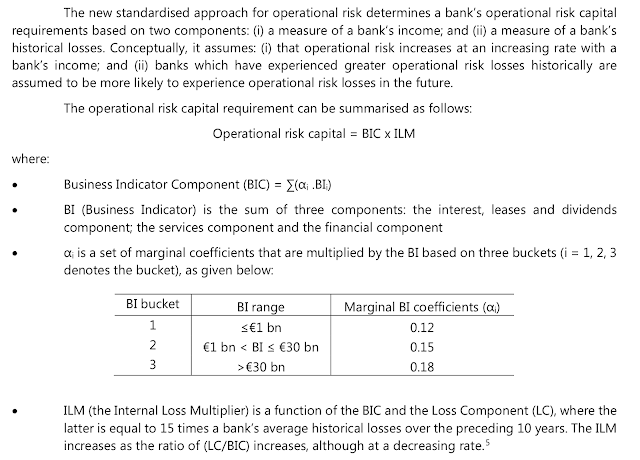 That’s it folks, well that's it from BIS but in our next posting I am going to describe what makes a good measure of risk because what we have here is far from what we have now and far from what needs to be in place.
Posted by Causal Capital at 2:12 PM