Looking back in time is something I recommend risk managers should do from time to time and this week drove me to do just that. In this short blog posting, we are going to take a peep at why and how it is essential for risk managers to see how well they are truly doing and that comes from looking back, it’s more healthy than you may believe, especially if you are honest with yourself.

So what brought this about?

I was working with a client this week in the GCC who said to me:

“No one saw the Global Financial Crisis coming, the collapse of property prices in the UAE or that of oil, the renaming of the Burj Dubai (Dubai Tower) to Burj Khalifa on the back of financial support from Abu Dhabi, no one could have anticipated any of this."

"You can’t predict the future, the market was a head-strong bull market before this crisis, and we are still suffering from it [LINK]. There was no way out before it happened, investors were blind to what lay ahead in respects to the GFC and all of its machinations."

Maybe investors had plenty of bias, but an excellent question to ponder on is: Back in 2006, were risk managers savvy to what what was about to happen?

One way to test how prepared a business was is to step back in time, which is a difficult but not impossible thing to do if you know where to look.

In this case, we are going to need to turn to one of my favorite community of finance people, the Project Finance unit. Project Finance guys n gals are the gurus of financial modelling and deal structuring, they are on the cutting edge between the sell-side and buy-side, and if anyone should know what lays ahead, this lot should be able to offer up an opinion that is at the very least worth challenging.

So back in time we must travel, take us back to ummm 2006 or late 2005, and it must be before the collapse, well before what was about to happen had become common knowledge and definitely before any coined three letter acronym had been invented to label the world crisis.

Trawling through our project finance library we spot it, a dusty spreadsheet icon from the past, it's old enough that a Microsoft Excel file-version alert pops up when we attempt to open the file. We have authentically found what we are looking for ... a historical business model, a time capsule if you prefer with forward-looking projections but forecasts that were made before the GFC clobbered the Gulf. 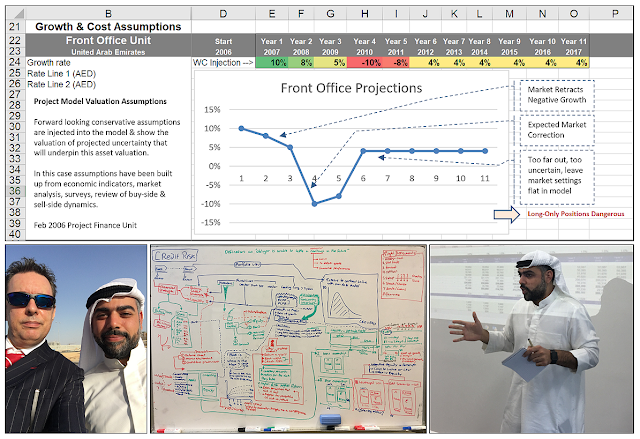 Taking us back was an interesting experiment which turned out a couple of surprises. I have snapped the key aspects of a 2006 GCC project finance model into this blog but also without breaching any confidentiality. Anyway, let’s go to the meaty stuff and there it is ...

A financier back in 2005 inserted into their model at the expected case level the business assumption that an economic recession is possible and a contraction of market prices will likely impact their project. This was not the modeler's worse case scenario might I add but the expected business case which is a complete wow because we are dealing with the front office here. We are not facing some risk department that wants to be overly conservative by saying no to a project. This is the place where deals are cut, and these guys rarely put a negative spin on anything, especially when they are trying to raise capital, just as it was with this untouched spreadsheet model.

In the sheet there is this ominous warning of “Long Only Positions are Dangerous”, which is nothing less than incredulous. Just imagine saying that to investors, don't invest in my project. Even more interesting is to make such a claim in the economic backdrop of 2005, a pre-crisis momentary high where pretty much all asset classes were blue sky we can build the tallest tower in the world kind of position. In part, my faith in finance has been restored, but here is the crinkle; how did these guys know a crisis was looming so close? Perhaps that is a pondering that needs some further probing.

What is also interesting is that not only did the financial analyst show in their model that a deep reversion in asset prices was highly possible, that after this market shock had occurred, their price growth forecast also remains flat. The argument that was given to me for such a scenario was that if these dire economic conditions in the model really do materialize, it is going to be unlikely for us to see the economy bounce back so quickly. As it was then, perhaps not deep enough but in shape, as it is now. This project finance team had it covered.

Seems like quite levelheaded reasoning along with solid business assumptions to me, but how does one sell "Long Only Positions are Dangerous" to investors? Well, they had that covered too and they had to protect the project because commissions were paid out across the business model, and not up front.

The project was designed to address different financial scenarios with the likely case showing a collapse in asset prices and investment contracts were sold through an option facility allowing investors to be rewarded from the project's upside but also protected from a drop in revenue as part of project's risk mitigation strategy.

While this project was being planned at a conception level, it was possible to design the financial structure to be resilient to different types of risk, including systemic economic shock. These real options or contingent contracts that were used in this deal are not so different to the way in which project managers take specific precautions for other types of risks that may deteriorate a project's critical path.

Risk Management Learning
In this wonderful story above, there are six key learning points for risk managers which I believe are worth highlighting, and I will do so in summary:

1. When project decision makers design their strategies, they should consider and plan for a range of future scenarios (good and bad) their projects may have to endure.

2. Sensitivity analysis can be used to identify which factors of uncertainty may combine to create project weaknesses and of course which of those factors are most influential in a specific vulnerability.

3. Using option structures or contingent contracts (real options in the case above) can help improve the survival rate of the overall project. I might look into writing a blog on real options because it is an exciting area of structured risk management.

5. Risk Teams should help develop infrastructure (an approach, policy and systems) to allow project teams to [ stress test ] and [ backtest ] their business strategies.

6. Project Engineers and Stakeholders need to maintain a level of skin in the game and consequently ownership of a project's outcome.
Posted by Causal Capital at 11:13 PM