Volcker me sideways, as the saying goes. Sorry its not a well-known term but I think its about time someone coined it. Really, jokes aside, this Volcker thingy is a vulgar beast and the US regulators need to think long and hard before pushing ahead with the ruling to the letter.

Interpretations are important as we shall see and sound regulatory guidance will be one of the key factors for determining whether an investment banks business model remains viable at all and whether the ruling itself is effective in any manner.  What might be worse, is that the Volcker rule may encourage the very disorder it is designed to prevent and in this blog we will take a look at some of these issues.

I knew, I just knew the UBS infamy was going to spur on and fuel a justification for Volcker me madness - Kweku Adoboli you aren't helping us mate. It took longer for these articles to surface than I expected but I am sure we are going to see many more of them in the coming months ahead.

See journal : UBS trading scandal shows need for Volcker rule. Don't misunderstand me, this is a great post, well written and technically correct, I just don't like the way it is all going.

For supporter of the proposed Volcker Rule, the news that a rogue trader at UBS lost IBS $2.3 billion comes at the perfect time.

But the Wall Street Journal thinks that the current draft of the rule contains such big loopholes concerning what banks can call hedging that traders would "have license to do pretty much anything" according to Robert Litan.

We will investigate the "what banks can call hedging" point in this blog because it isn't straight forward. That is part of the problem with Volcker me sideways madness.


The Volcker Rule
The Volcker rule was endorsed by president Obama on January 21, 2010 and passed by the Senate on May 20, 2010. It's main objective is to reduce speculative trading by banks and many banks have consequently closed their proprietary trading desks as a consequence.  A year after the bill was passed, Goldman Sachs shut down two of its trading units and more information can be found here on [Goldman Liquidates 2 trading units | Bloomberg].

Goldman Sachs isn't alone and a month later, Citigroup shut its $400 million proprietary fund which was specializing in quantitative trading strategies, JP Morgan has closed its commodities unit and Bank of America is laying off 30 traders from its prop desk.

Most US banks have been attempting to comply with the Volcker ruling by directly targeting these prop desks but at the same time, trying to allow other trading units in the bank to function as normal. All that aside, if the Volcker rule is taken to its letter, banks may need to rethink how all trading units operate, especially when it comes to taking risk with the firms capital directly.

A reform issue
The Volcker rule has specific grey areas that are open for interpretation and it has been noted by the industry as a whole, that confusion is widespread.

The language of the bill is subject to interpretation as stated by agencies at both the Federal Reserve and the Federal Deposit Insurance Corporation ... There has even been a question on how to interpret the phrase "Solely outside the United States"

What the Volcker rule doesn't ban is market making activities, risk mitigation hedging, underwriting and transactions on behalf of customers. This is an important criteria because investment banks form the mesh between corporate fund raising and private investor pools; to interfere with this activity would put the entire economic model at risk. On the other hand, these investment banks also manage money in these pools and are likely to carry some risk.

Where is the line truly drawn?

Proprietary trading is itself a speculative unit operating directly within the bank but trading behavior that is deemed unique to prop desks can also be found elsewhere in these organisations.

Banks are directly forbidden to generate profits from trading activities where they are using their own capital and they must physically separate flow from customer facing businesses. Banks can't participate directly in hedge fund ventures and their options to profit from taking direct positions in the market is theoretically going to become very slim.

What is likely to occur is that banks may increase the sophistication of market making units to compensate for the loss of pre-Volcker revenue that their prop desks used to feed them. If that is the case, then the Volcker rule may do more harm than the good it is intended for. It could end up dispersing potential prop desk afflictions across other trading areas in the banking model.

One outcome of increased risk taking behavior from market making units, may be the opacity and disconnection of control effectiveness as processes are changed. Another unwanted outcome may be an increase in covertness about what goes on in the market making room altogether. Either way, as it stands, current activities in these market making rooms have never really been that transparent and common oversight from a regulatory perspective has often been lacking.

What are the trading book issues?
It is very difficult to separate profit taking behavior from buy and sell side order books in brokerages. These business models aren't charities and banks don't make all their gain from fees or margins, there is more to it than that. Yet, the Volcker rule tries to simplify the banking/brokerage model in a way that just doesn't reflect reality.

In the schematic below, we will take a look at a couple of trading examples which emphasize these points and believe me, in the world of investment banking these are very simple deals. 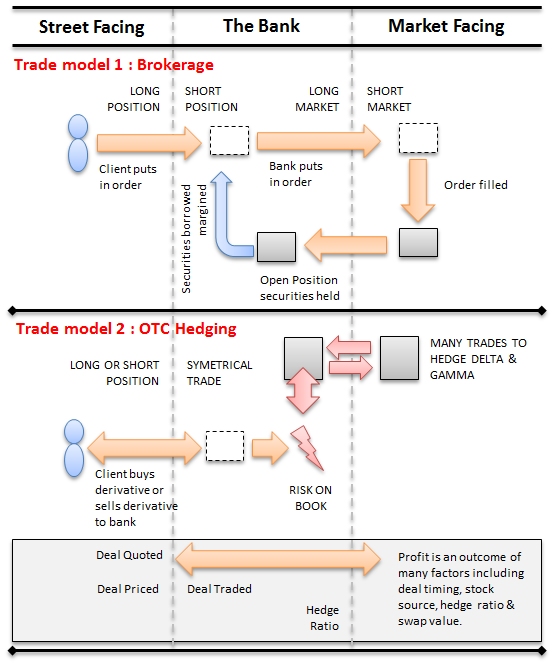 Model 1 - The Brokerage
The most obvious trade and perhaps the most voluminous for investment banks would be a direct order from a customer to purchase a security. The customer asks the investment bank to execute this order on their behalf and the bank will hold that position on their trading book for the client.

But from a Volcker perspective, there is a problem with this very simple order. Firstly the bank may not take that security off the market but directly out of their order book, they might borrow the security on an IOU, the bank might price the security and purchase it at the end of the day. It doesn't stop there either and there are many other creative ways to back-fill the traditional bid order, traders generally kind of find ebullience kicks in when the bid-offer spread widens. These slight tweaks can result in additional gain for the bank and in the past, such tomfoolery would have been left in a prop desk domain.

With the Volcker rule in place, the game is going to change. The prop desks are gone yet the bank still needs to show a good return on equity for its shareholders and it might have to be smarter with the way it runs securities order book.

The cash equities trade we have explained above is the most simple of orders and it all becomes more complicated from this point on as you can imagine. In our example, the client might come back to the bank to margin down (ie borrow against the security) to purchase more securities. In this case, the bank is taking on counterparty margin risk with the client that if managed properly can be a very profitable business. Will banks evolve security lending and financing? Again, with the prop desks finished, there will be motive to do so and prop desk contagion may end up pressed deeper into the lending book.

Model 2 - OTC Hedging
When we move away from cash equities and into the OTC world of derivatives, the rules seriously change.  The client may be solely trading derivatives, perhaps only simple ones such as equity options but many of these trades will be naked. That is, there is no underlying security covering the derivative transaction.  In this case, the bank may collateralize the order however the bank can be positive and negative risk, both are dangerous places to be. Where the bank is positive gamma from buying options and negative gamma from selling them, so what? Well, when premiums are flowing both ways, each domain needs specific hedging strategies not just collateral cover. I hear people say a book is flat but hedging is a continual adjustment process otherwise upside might be lost, no one squares off 100% unless they are on holiday.

Do banks make money hedging?  Well they shouldn't lose any theoretically but saying to them that no brokerage can profit by changing the tightness of a hedge is akin to walking a group of tipsy men into a table dancing bar on the proviso that none of them have any fun.

Now in the case of the Volcker rule, it states hedging is thumbs up but there is hedging and well as we can see, there is a different kind of hedging. When the hedge is 100% square there is no upside for the bank. That is likely to change to maintain returns, however with upside comes downside; the two always go together.  The big deal with all of this is that without a prop desk bringing in solid gains, banks might consider to use more creativity with the way in which they hedge. This is all fine but again prop desk contagion is being pressed deeper into the organisation.

Skin in the game
A bigger issue I have with the Volcker rule is that it takes skin out of the game.

The best trading floors are ones that actually participate in the product rather than simply being some kind of check out cashier at a seven eleven store. Imagine you go to the counter in your supermarket to buy a product and ask the sales clerk what they think of product and their reply is; oh we aren't allowed to use the firms products, the sales team don't know. How confident would you feel as a customer?

Banks are the same in this sense and traders that have to run profitable books become wiser around the markets they trade in, why? Simple answer, they are actually in it and living it. If the Volcker rule is fully implemented, this trading talent will leave the banks and head for a less nanny state territory such as the hedge fund cosmos.

What will these smart traders in banks be replaced with?

Well they can be staffed up with sixteen year old's that are doing not much more than order taking at a cafe, the role certainly won't be that much more complicated unless of course, we move prop desk modus operandi underground and into the market making book.
Posted by Causal Capital at 3:39 PM