Short Covering Rally, this is what we are seeing. Well that is the word on the ground among some trader communities.

Is this a snap back or the start of a recovery?

In this blog, we are going to look at what a Short Covering Rally is and where the market is going.

What is a Short Covering Rally?

Short covering is where a trader purchases a security to close off a short position, this squares their short strategy and the buyback component of the short strategy can have upward price momentum on the stocks that were shorted.

So for a market to be in a Short Covering Rally traders must be doing this on mass. As unexpected as that may sound, it is quite typical. The market price declines decelerate to form a support level and those that are shorting will close off their strategy to ensure they can capture any gains that have been made.

Another dynamic that is representative of the recent market bounce back is what is known as a short squeeze, right what is that I hear some people say?

A short squeeze is generally found when there is a lack of supply and an excess demand for a traded stock, this has a tendency to force the price higher.  As the stock price rises rapidly, the trend continues to escalate as short sellers clamber off their orders.

What are the components of an SCR Support Level?


There are several factors that are generally found with both short covering rally's and squeezes and they include: (Noticeable price deterioration and a regime shift, the development of support levels but actually it all starts with the build-up of shorting order pressure in the first place).


[1] The first is a long run or sharp price deterioration phase. That we have seen and the regime shift is confirmed.  Leading up to the recent recovery rally on stocks, prices had been collapsing day-after-day as more bad news was being reported on Europe's sovereign debt issues. [2] The next point to watch is how the market reacts to restitution news and what it does when the news is found to be false. Over the last few weeks there has also been all sorts of different rumors that have emanated from various sources (mostly politicians) that there will be a European bailout or guarantee of some kind. When pressed to make assertions on these comments, the rumor sources seem to disappear, the politicians can't be found and the market falls back to its support level.

[3] In the lead up to the August collapse, shorting pressure was increasing at an incredible rate and the NYSE Short Interest vs SPY climbed over 25% from the end of May through to the end of July 2011. This is a bigger short position concentration than any other in the preceding 12 months and was pressure that needed to be released.

The first set of bounces occurred through August in figure 1 and were more than likely short covering rallies. The index then fell back to its floor and because the bad news persisted, along with a set of rating downgrades, the index remained restrained.

How can we evidence this belief? 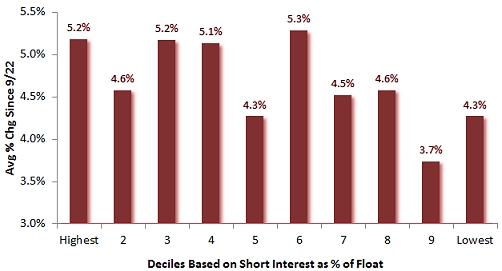 Figure 2 : Performance of Short Stocks since 22nd of September

It's certainly convenient and easy to use "short covering" as the reason for any rally, but it's definitely not always the case.  Most of the time it's simply the token explanation that's used when there's no other glaring reason staring strategists in the face. Bespoke Invest | Tuesday September 27

You can make your own mind up whether this is a snap back or not by reviewing the recovery of the group of stocks that were most popular targets for shorting by following this Link.

So what else can tell us whether this is a snap back or a true recovery. Well a range has been established in the S&P 500 which is clearly visible that shows the impacts of positive rumors and reality and, the index has been swinging between the 1200 ceiling and the 1120 floor for long enough that a breakthrough of the 1200 zone would confirm a stabilization from the recent clearing out of shorting pressure.

What is likely is that swing trading opportunities born from recent political spin doctoring may continue for a while yet.

So where to from here?

Well positive and negative news is out there and priced in:

[1] It has been reported on Bloomberg that the cost to protect Morgan Stanley from losses has dropped for a fourth day as concern has eased over its balance-sheet being impaired with debt problems from Europe.

[2] The credit default swap index alone which always seems to rise as investor confidence declines has been holding with some improvements across some security sectors.

[3] On the downside: Payroll data showed that 103,000 new jobs were added in September which is up from August and nicely above analyst's estimates but the data alone has its own problems. The Verizon strike in August took jobs off the market but added them back in September. When one accounts for this statistical definition error, the numbers aren't that great and the official US unemployment number has remained stubborn at 9.1% with new jobs being mostly part-time contracts.

[4] More cracks appearing: There has been a huge swag of rating downgrades: Fitch has downgraded Spain's Long Term Foreign and Local Currency Issuer Ratings (IRD's) two notches and also Italy's (IRD's) from AA- to A+ with the long term rating being negative. Italy's sovereign credit profile remains relatively strong and unchanged, thank goodness for that.

[5] The new problem on the block and as bad as it can possibly be is further away from Greece and Southern Europe. Belgium has major problems or we should say the Belgium bank Dexia has. 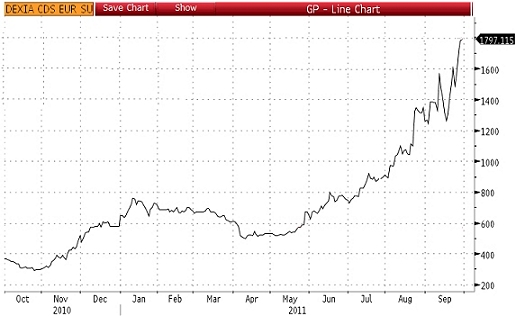 It is likely that Dexia will collapse or end up nationalized and the shares in the bank were suspended on Thursday while discussions with the board continue on a bail-out.

The board is to meet on Saturday in Paris to try to determine its fate after announcing that it was in talks about selling its Luxembourg arm.

Belgian newspaper De Tijd reported that the government was preparing to nationalise the bank, which was bailed out in the early stages of the 2008 banking crisis with €6bn (£5bn) of cash – although local politicians made it clear that France needed to help carry the burden. The Guardian | 6th October 2011

Belgium already has over 320 billion of debt and a GPD ratio that is unable to sustain further expansion of any line without a substantial rating downgrade, this point alone is already compounding negative outlook data. Dexia has presently taken a EUR 377 million pretax write down on its Greek bond holdings. It also faces a further EUR 3.2 billion of potential mark downs when considering its total sovereign debt positions which include Greece, Italy, Portugal, Spain and Ireland and, the total value of this little lot is sitting around EUR 21 billion. To be concise, there is a slim chance that the Belgium government can assist this financial institution in any major way without additional support from other nations.

So where do we stand, well its a mixed bag market and unless there is really substantially poor news such as another unknown event, we are unlikely to fall past the 1120 S&P 500 floor but at the same token a quick bounce back into the 1300 S&P 500 range is equally improbable unless corporate earnings improve. Good news on revenues, especially from companies with little exposure to the financial sector has to over shadow the pending Belgium disaster and the Belgium Dexia problem needs immediate attention. If corporate earnings are poor, then watch out as it won't take much more to push the S&P 500 Index through the floor even without shorting backlog pressure in the background.
Posted by Causal Capital at 9:26 PM