Too Big to Fail

Whether the recent sovereign debt issues are an instigating factor or not, the too big to fail agenda is back on the table for debate among global regulators.

BIS on Too Big to Fail

On November the 4th, the Bank for International settlements released a paper for Global Systemically Important banks. This consists of an assessment methodology and an additional loss absorbency requirement but as it stands, these rulings are only going to apply to handful of banks, not all financial institutions will be trapped under the too big to fail program.

As we know, Basel III introduces conservative measures for risk management as well as new capital requirements that includes a standard for liquidity risk, a capital conservation buffer, a countercyclical buffer, a higher risk coverage for counterparty risk and a set of leverage ratios but apparently this may not be conservative enough if you are a G-SIFI bank.

The solution that BIS is proposing comes bundled as a dual response and you guessed it, capital charges are going to rise even higher. The two pronged approach is to firstly reduce the probability of that G-SIFI will fail and secondly the program will attempt to limit the extent of impact from such a bankruptcy. However, the tactics being deployed to meet this end appear to be totally based around the capital instrument end of the game, rather than any other kind of facility.

The external aspects or "externalities" as BIS puts it for a G-SIFI are based around how large, how interconnected, the "cross borderness" and the complexity a financial organisation appears to have. The science for classing one bank as a G-SIFI over another made up over half the BIS publication.

Introduced as an indicator based measure for G-SIFI, the methods for grading market infrastructures or insurance companies will come as an add-on to the methodology later on down the track.  There will of course be quantitative and qualitative indicators for capturing differently structured banks and the table below summarizes how these indicators will work.

The five categories of what is deemed systemically important are given equal weight so that a final score can be developed for every bank that is assessed to have a G-SIFI attribute. The rating itself is a relative based measure and it is calculated by dividing the individual bank score by the aggregate amount of all banks in the G-SIFI community. This is fine but how individual scores will be captured for each of these five areas is more than likely to be heavily debated. Either way, it is proposed that the initial G-SIFI basket of banks will kick off with twenty nine specific institutions.

A G-SIFI Solution
The actual indicator process for classing a bank as a G-SIFI seems to be relatively well thought  through but the response for a G-SIFI is perhaps a little bit thin on the ground or less robust and will probably need a lot more investigative design work. Mind you, it is still early days for a formal regulatory approach to treat the G-SIFI disorder.

To cut to the chase, it is proposed that G-SIFI's will have additional loss absorbency buffers of common equity tier 1 capital which is to be applied to the value of 2.5% risk weighted assets. This capital charge is going to be appended to existing Basel III capital requirements and the buffer will start off with an empty bucket of 3.5% risk weighted assets. 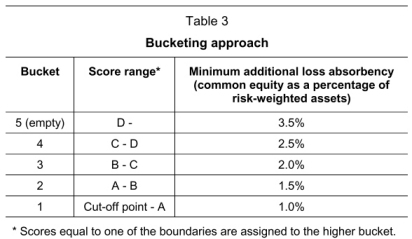 Capital accumulation aside, there is also a tendency to move away from Non-Viability capital such as bail-out payments to the new bail-in debt program being recommended in Basel III's main brief.

The new tool for additional loss absorbency in this case is being labelled as On-Going-Concern-Contingent-Capital or High-Trigger-Contingent-Capital but fancy names aside, it doesn't come without its problems. Even BIS points out that this is an untested method which will need to be evolved overtime and Contingent Capital itself, might have unpredictable outcomes when investors sense a stressed environment is approaching a bank. While BIS identified these concerns, a firewall solution wasn't directly proposed to prevent herd mentality and rapid selling of distressed bank stock.

It is encouraging to see that BIS have reviewed issues around Pre-Positioning of capital in a solid earning period, as an effort to cover for potential downturns.  The downside to this is going to be disposing of these instruments to resolve liquidity funding issues and as we know, such actions might move a bank's stock prices into a death spiral domain.

Additional resolutions are probably going to be needed for banks that suffer liquidity, price or funding issues and capital alone may actually not be a simple or the correct restitution method for the G-SIFI problem entirely. One concern which is going to need immunization, is when banks are unable to access the credit markets during moments of volatility and credit squeezing. In this case, I fair another mechanism might need to be introduced in line with this additional capital program but that hasn't been proposed as yet.


All in all, a great start, but definitely more work needs to be done.
Posted by Causal Capital at 9:53 PM