There appears to be a resurgence of interest from risk managers to engage formally in scenario analysis. This interest appears to be driven in part, from banks operational risk departments; hoping that they can move their risk framework onto the Advanced Measurement Approach of Basel II.

While Basel-III's predecessor to Basel-II doesn't require any changes to a bank's operational risk framework, some institutions are still looking to improve their operational risk reporting systems and they are attempting to achieve this goal through the scenario analysis route.

In this article we will discuss this recent curiosity in scenario analysis and provide a complete presentation which can be downloaded that explains how to build a best practice scenario analysis program for operational risk.


What is Scenario Analysis
Scenario Analysis is used in operational risk to dimension potential losses from extreme events, what is often referred to by analysts as the unexpected loss component of the probability loss distribution function. In short, the tail of this loss estimate curve.

In winning operational risk strategies, there will be a tendency to target specific aspects or qunatiles of the loss distribution directly and each agenda will select a different emphasis on the way it uses data from this probability distribution.

There are several approaches that banks can entertain for estimating the tail of in operational risk and they broadly fall into three methods:

Extreme Value Theory or EVT uses curve fitting estimates close to the maximum loss threshold to generate a smooth type II or tail curve. This approach is often referred to as the Loss Data Approach for Basel II AMA.

Risk Drivers and Controls Approach or RDCA, builds up a Bayesian network of risks and controls that can be used to propagate the tail curve.

[3] SCENARIO ANALYSIS
Scenario Analysis is a process of posing forward looking "what if" questions to business units. These "what if" questions are designed to capture a description, loss amount and potential frequency for extreme events. A good scenario analysis program is normally executed after risk intel has been captured elsewhere from the operational risk framework. Consequently, scenario analysis is not normally an early initiative in an the entire operational risk program.

Each method list above has its own benefits and drawbacks. However, nearly all banks that have moved into the AMA space for Basel II, seemed to have engaged scenario analysis in some form or another.

This is not new stuff and disappointingly, I haven't come across that many novel or ground breaking ideas when it comes to operational risk. Certainly over the last five years the banking industry appears to be recycling old concepts and in the context of scenario analysis, this rule probably applies as well.

Perhaps one of the more proactive community based initiatives that was launched back when operational risk was all the rage for Basel II, was the sbAMA working group. Back in the Basel II years for leading institutions, banks which wanted to move towards Advanced Measurement Approach generally struggled with data or lack of it as seemed to be back then. Actually, there were so many bankers with this data paucity curse, that some of them decided to form an alliance to resolve the missing data problem. The sbAMA working group was formed as a formal meeting point for bankers to exchange ideas and data on operational risk.

To sum it up, if you want to kick off an operational risk scenario analysis program, the output from the sbAMA working group is a good place to start your research. The presentation attached to this blog has been written with the working groups techniques in mind and it extends on the original effort outlined by this sbAMA committee. 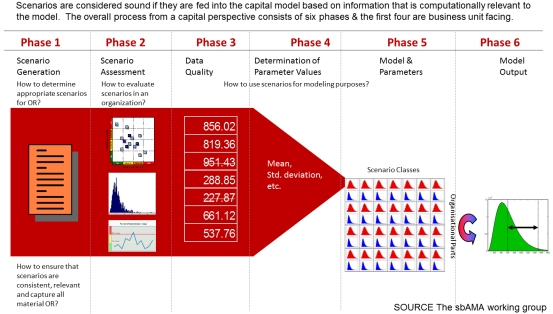 While Scenario Analysis seems like the ideal panacea for missing loss data, it isn't a straight forward activity to engage in with staff. The sbAMA working group address some of these technicalities, by breaking down the complexity of a scenario analysis program into six concise and manageable phases.

The presentation attached here the presentation, explains how each of these six phases works in more detail.
Posted by Causal Capital at 10:25 AM