New proposed rules for Asset Backed Securities have been released by the US regulatory agencies for comment.

These rules are aimed at addressing the way in which banks securitize their loan portfolios and are a response to one of the main causes for the credit crisis in 2008.

What lies ahead for banks and investors?

What brought us to this place
Without a shadow of doubt it is accepted by both the investor and regulatory community that one of the main causes for the credit crisis was the way in which banks transfered risk off their banking book and into the market.  Asset Back Securities wrapped in Special Purpose Vehicles allowed banks to originate loans at any level of creditworthiness and then transfer the risk to the investment community directly.

The US regulatory agencies have been working on a new ruling which will change the market interpretation of credit risk transference. The main objective of the proposed mandate is to ensure banks keep "skin in the game" when selling credit risk from loan portfolios to investors. This "skin in the game" concept is an effort to fundamentally lift lending standards by holding banks accountable for the instruments they transfer off their banking books.

How this new mandate addresses the existing problems
The proposed rules which have been developed by the Comptroller of Currency, Federal Reserve System, Federal Deposit Insurance Corporation, US Securities and Exchange Commission, Federal Housing Finance Agency and the Department of Housing are a grand vademecum of over two hundred pages and they attempt to treat the majority of recognized problems found in Asset Backed Securities sold in US markets.

The proposal which is attached at the bottom of this blog, is actually a commendable piece of work and if accepted into regulation, it will result in credit risk retention requirements being passed into section 15G of the SEC USC 78o-11 Act. To ensure a wide acceptance from the financial community at large, the US regulatory agencies have invited academics, bankers and many other faculties of the finance domain to comment on the proposed guidelines before June 10, 2011.

Interested parties are encouraged to submit written comments jointly to all of the agencies, and to use the title "credit risk retention"

The notion under this eventual mandate is to ensure that any institution which intends to securitize credit risk retains a minimum of 5% of the original credit risk against total asset exposure and it achieves this by collateralizing the Asset Back Securities directly with cash. 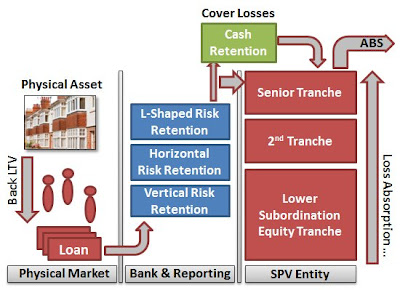 A sponsor is required to establish and fund a premium capture cash reserve account in connection with a securitization transaction.

There are exemptions to the rule but they are clearly defined.  For example, Credit Risk Retention requirements don't apply if the original loans represented in the Asset Backed Securities are covered through insurance from the Federal Deposit of Insurance Corporation.

The Upside
Overall and on the surface the proposed mandate appears to be a sensible response for creating ongoing accountability for Asset Backed Security underwriters and sellers. It is also quite impressive that the agencies were able to find common ground to develop a non prescriptive ruling and several approaches for calculating the Credit Risk Retention buffer have been proposed by working with the industry directly.

Apart from the 5% risk retention capital buffer, there is a major focus on maintaining good Loan To Value ratios when loan contracts are passed into the Asset Backed Security instrument.

Underwriting standards will include, among other things, maximum front-end and back-end debt-to-income ratios of 28% and 36% respectively, a maximum loan to value ratio of 80% in the case of a purchase transaction ... Exemptions apply if the sponsor can tie and pass through pools of quality collateralized assets to the underlying contracts.

In respect to the regulation of credit ratings for Asset Back Securities from credit rating agencies directly, the proposed guidelines here pass that responsibility back into the Dodd-Frank Wall Street Reform Act.


Section 15G compliments (this proposal) complements other parts of the Dodd-Frank Act to improve the transparency of credit ratings.

Some analysts may criticize this stance of omitting credit rating agencies from the act especially as they were partly responsible for incorrectly rating specific Asset Backed Securities during the credit crisis however, it has been recognized that the proposal is already quite complex and over regulation would simply lift the costs of compliance to potentially unacceptable levels.


Needs Review
On the downsides, the proposal is quite long winded and a concise version with a step-by-step check list will need to be conceived and evolved otherwise banks will struggle to meet this component of the 15G Act. That check list activity will probably end up in the consulting arena however even with a clear road map in place, banks still have a lot of work to do.

The agencies have preempted this concern and estimated the time required for meeting the prepossession guidelines and, they have carried out this estimation exercise at a contract level.

FDIC estimates for 90 sponsors and 4715 creditors the total annual burden would be 59,463 hours while the OCC estimates 30 sponsors for 1650 creditors would consume 20,483 man hours.

Personally I was quite overwhelmed with those numbers and clearly software tools will need to play a central role in calculating retention buffers & reporting provisos otherwise this initiative will be difficult and expensive to operate.

One nebulous area of the act which will need more clarity is the permissibility of hedging structures in ABS portfolios.

This rule is not set in stone as yet and a request for comment is sitting open on whether there should be broad exception for enterprises when risk retention is already in place.

All regulations change market behavior and there is some apprehension  around the minimum 5% credit risk retention benchmark which, on the surface seems to be a token arbitrary "skin in the game" number.

In reality, is 5% enough for young portfolios?

Then of course how much "skin in the game" is required to supposedly lift origination as well as transfer standards and surely the ABS instrument is all about transferring credit risk? This play on concepts seems to have some proponents of counter logic and might incentivise sound credit origination policy in some circumstances but may have abstract results in others.

In an SPV structure credit risk on receivables is absorbed by different contracts set at different levels of subordination and senior investment classes experience losses after lower rated securities have been eroded and, the calculation of loss potential may be highly correlated yet, there is still a spread of relative value in the ABS tranches. To complicate matters further, the proposed cash retention buffer can be quantified using several different methods including a horizontal retention or a vertical retention approach and, depending on the choice of calculation there may be a shift in the way in which cash is applied to losses when and if they occur. This complexity could create some obscurity in pricing return and risk against the retention buffer's usefulness.

The ideal situation would be for banks to report the potential effectiveness of the cash retention buffer against each ABS subordination tranche, keep the front and back Loan to Values and, include the default rates in the reporting. I believe reporting additional information such as this will go a long way to improve the risk / return analysis for investors so that they can understand more clearly what they are buying.

From the document "residual interest retained by the original seller is sized so that it is sufficiently large to absorb all losses on underlying receivables". This "skin in the game" or cash retention buffer, call it what you may has two fundamental hurdles which need re-framing:

Firstly if the bank is trying to transfer risk to the market but is to hold a price for that risk in cash, it could be argued that the objective under the ABS derivative itself is nullified or at least partly. We can accept that setting standards for Loan to Value in combination with holding a residual interest cash buffer will encourage the generation of higher quality Asset Backed Securities however, these are the type of loans banks generally want to hang to. The treatment of sub prime high risky lending contracts that are often passed into market, might need another approach or more work.

Looking forwards
The confidence in Asset Backed Securities has diminished substantially over the last two years, with market asset transfer values being deflated by over 70% since the credit crisis first took hold in 2007.

The idea under this proposal is to restore confidence in the market by lifting the standards underneath the types of contracts which can be sold away and to extend the reporting and monitoring responsibilities for sellers of these derivatives. This mandate is well intentioned, incisive and a great launch into regulation for securitization none the less, I definitely look forward to reading the feedback from academics and industry players when they interpret the rules.

Proposed Guidelines can be downloaded here
Posted by Causal Capital at 10:59 AM