ERM is more than Op Risk

If someone was to ask me what is the biggest hindrance holding back the evolution of Enterprise Risk Management today, I would probably have to say it's the over obsession risk analysts have with trying to squeeze the entire world of risk into the realm of operational risk.

Really, how important is operational risk in a typical company?

ERM is more than Op Risk
The types of risks that can effect any business may originate from an endless array of possibilities; storms, human error, fraud, system failure and so on. Nevertheless, this small list I have just created is all based on threats from the operational risk domain, while most companies spend much of their time in business as usual. The world of business as usual is dominated with a different set of priorities such as quality control, time of delivery and the struggle of bad debtors, late payers, commodity scarcity and market volatility.

So then, if enterprise risk teams are overly fascinated with assessing threats from the operational risk corner, aren't they missing the boat with these other prevalent concerns, one would have surely thought so?

If we take a look at banking, just as an example; we can actually see that operational risk is not as big a deal as some people would like to make out. This is especially the case when we compare operational risk as a capital number alongside other reserves for different classes of threats and we have done this comparison below: 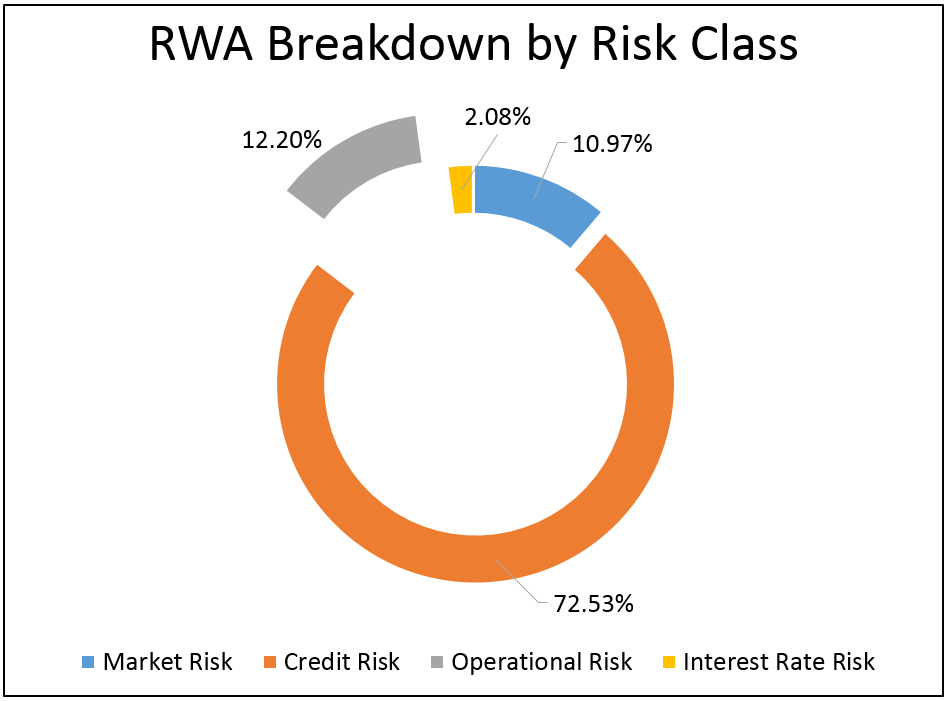 The chart above was created by reviewing various Basel II-Pillar III reports from different financial institutions, with a focus on banks in Australia. 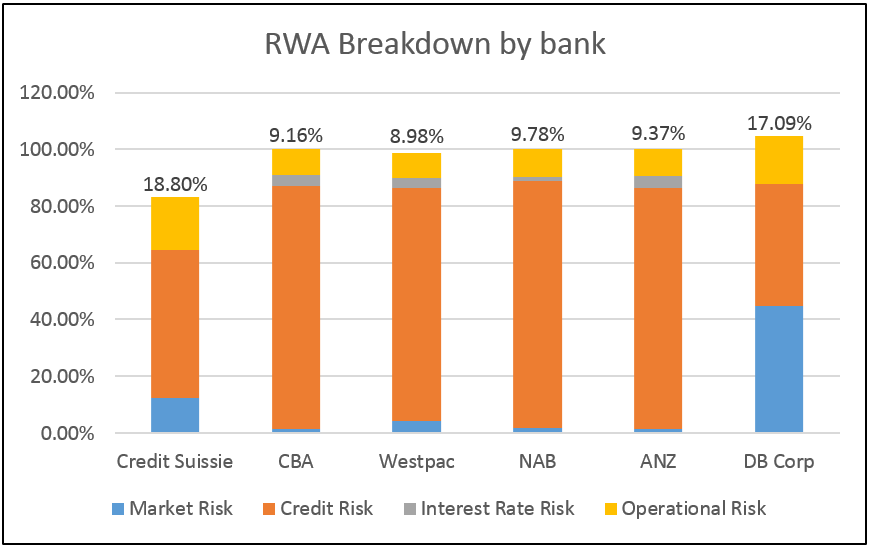 By assessing Pillar III from the 'big four' in Australia, my claim on the importance of operational risk seems to hold true. Precisely, operational risk is about 10% of Risk Weighted Assets when reviewed as a capital number or to look at it from a financial perspective, operational risk generally only consumes 10% of a bank's risk budget. This is to be expected in the world of finance because traditional banking generates its revenue from entertaining chosen risks such as those found in lending.

Ironically though, Australian banks seemed to have suffered from a spurt business continuity problems of late but this aside; if we were to consider a typical business selling products to customers, expecting delivery of resources from suppliers or settling payments from sales, surely credit risk is also a major concern which needs attention.

Who would know what risk is the most serious?

Fortunately enterprise risk managers in other industry sectors don't often generate economic capital numbers, so risk teams can escape from having to deal with the business as usual problems in the realm of credit and market risk. I am not so sure that is such a good thing but as it stands, many risk teams aren't creating risk taxonomies either, so they probably aren't prioritising threats as a matter for considering what is most impacting to them.

What enterprise risk analysts have a tendency of doing is facilitating risk workshops that drive out specific risk scenarios that usually home-in on extreme catastrophes and again these scenario analysis exercises are normally targeted towards the operational risk domain.

Transforming ERM
As this is, ERM is all starting to sound far from superbly covered for credit or market risk, so how can we fix this?

There are several ways to skin a cat as the saying goes and that definitely applies to fixing ERM. In the diagram below, I have taken to draw up a schematic on how an enterprise risk framework can be evolved so that it treats threats from credit or market risk proportionately. 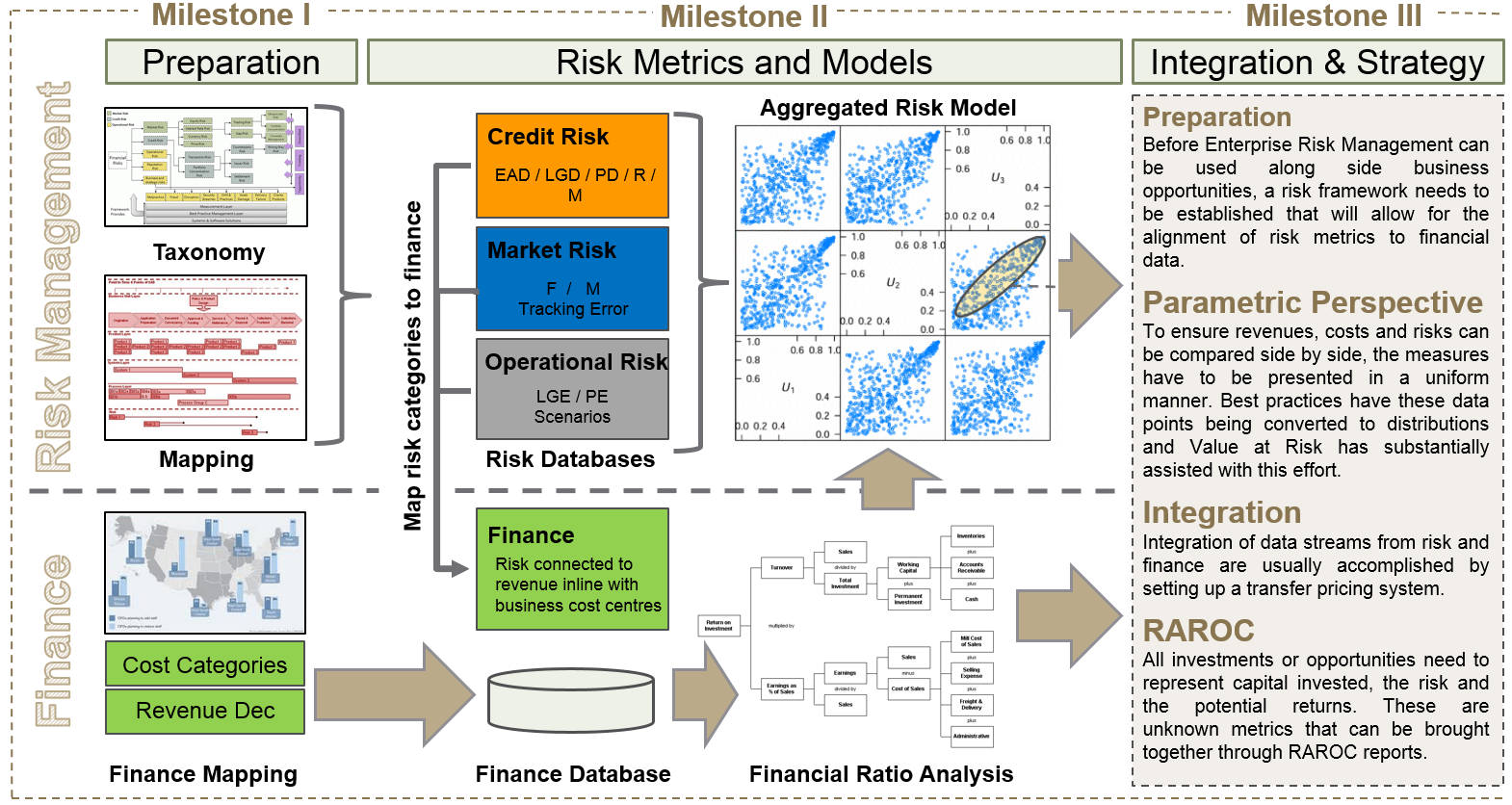 Primarily, if you want to compare risks side-by-side, you are going to need to do this in a parametric manner. IE; express risk as distributions not 'frequency x magnitude' spot estimates.

Let's say you do attempt a distribution approach to risk measurement, you are also likely to run into another nasty wall that is tied to data or specifically, the lack of it. If you can't capture homogeneous data in your risk framework, the distribution modelling won't really work. The solution to this next problem will lead an analyst into building a risk taxonomy for their business, a business driver's map and if they are complete with their work, they will connect all of this to the company's general ledger.

Quite a lot of effort isn't it, definitely a fair bit of research in some cases and probably the leading reason why enterprise risk teams remain prisoner to seeing the world of risk through an operational risk lens.

The big questions is, how long will this obsession with operational risk last?
Posted by Causal Capital at 7:39 AM