Nassim Taleb recently released a draft working paper along with a video to explain his theory behind the book Antifragile. In this posting we'll take a look at both of these items and explore in R-Project some of the Sigmoid functions he uses.

If you are a fan of the Black Swan or the sequel Antifragile, then these additional pearls of wisdom are going to be intriguing to scrutinise further. They give us insight into the model that is at the heart of the Antifragile concept.

Tails beyond normality
The measurement of risk has many conflicting and alternate endeavors.

One place is to quantify what we can measure in standardized worlds of error, like the cyclical variance of product quality on an assembly line. This end of the game is often wholly served with normalized techniques from the realm of Six Sigma and has been designed neatly to measure what is fragile. However, Nassim Taleb is interested in what can be antifragile and we won't find the 'synthetic domain' of Six Sigma nor the associated Gaussian techniques are able to support his quest.

The sense of empirical comfort found in normalization can encourage risk analysts to extend their thinking as well as their familiarity of Gaussian functions into the domain of the improbable but what is improbable comes from a world of complex systemic interactions. It is an environment that changes state as the scale of the background shifts and it fits linear models with difficulty. Actually, normalization probably doesn't fly in shape shifting worlds which is one of the deep seated narratives fuelling the 'intellection' of why black swans elude us in the first place.

Some of our biggest quandaries in risk management today are from the uncertainty in complex systems, being able to describe when they are stable yet fragile, whether they are robust and when or what will break them. Not enough risk analysts are tacking quantification of uncertainty in this way and what Nassim Taleb brings to the table is refreshing. 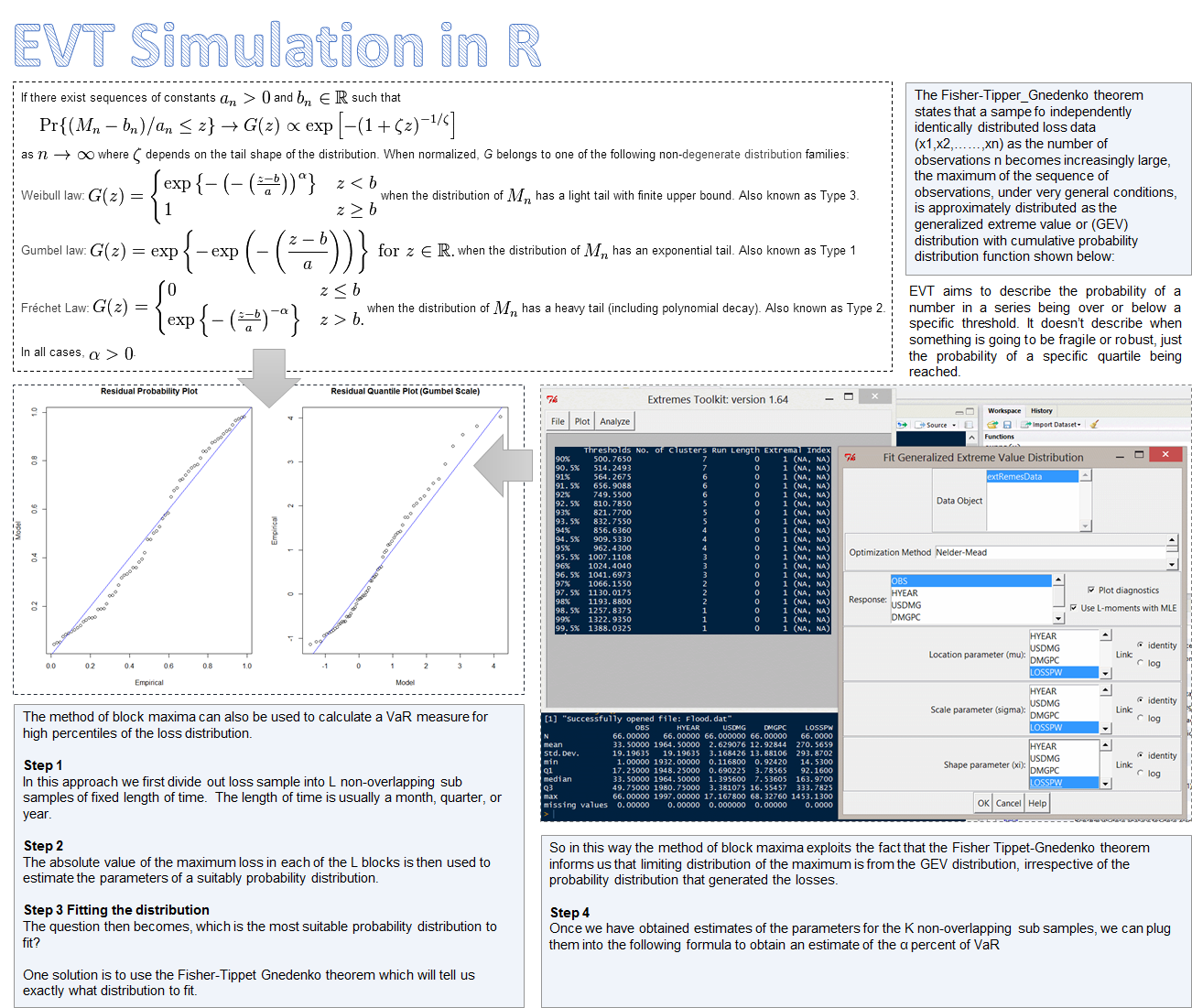 
This is beyond Extreme Value Theory which is often applied to measuring how improbably large or small something may become and we have shown a working R-Project example of this technique above. At its very essence, risk measurement has been focusing on dimensioning these "predictive indicators", just like those from EVT much of the time. Attempting to describe the probability that (x1, x2 ...) in a random series of readings will eventually reach a unique value over a specific threshold. EVT is a generalized, smoothed and a linear way of thinking, it is a parametric extension of normality and it has lots of flaws when applied to describing true unknown uncertainty.

The biggest issue with these generalized models isn't the standard error or degrees of freedom within the model outputs, it is the human misinterpretation of looking at the magnitude of a random series and the probability of breaching a single limit. We have become trapped in our own ideology of measuring risk and fixated on trying to predict an outcome.

Nassim Taleb's work is special because it challenges the way risk people observe uncertainty. It breaks away from the conformity to describe probability of occurrence or frequency of magnitude and moves towards the epistemic shape of outcomes from causality. I am not sure this subtle point is appreciated by many people, even in the field of risk but if the right interface is wrapped around Nassim Taleb's technology, it may eventually become a game changer.


Sigmoid in R
So then, why not take a look at this Sigmoid creature, let's see how easy it is to build a Sigmoid function and we'll use R-Project to achieve this.

In the set of screen snapshots below, we have taken the drc package in R-Project to run through a dose~response analysis over some sample data. The Dose~Response curves in 'R' have been explained in detail, are well illustrated and anyone who wants to learn more about the fundamentals of this type of modelling, should take a look at the Nonlinear Curves of Weed Science [ LINK ]. Our examples below can be stepped through with ease and only after one quick read of Weed Science. 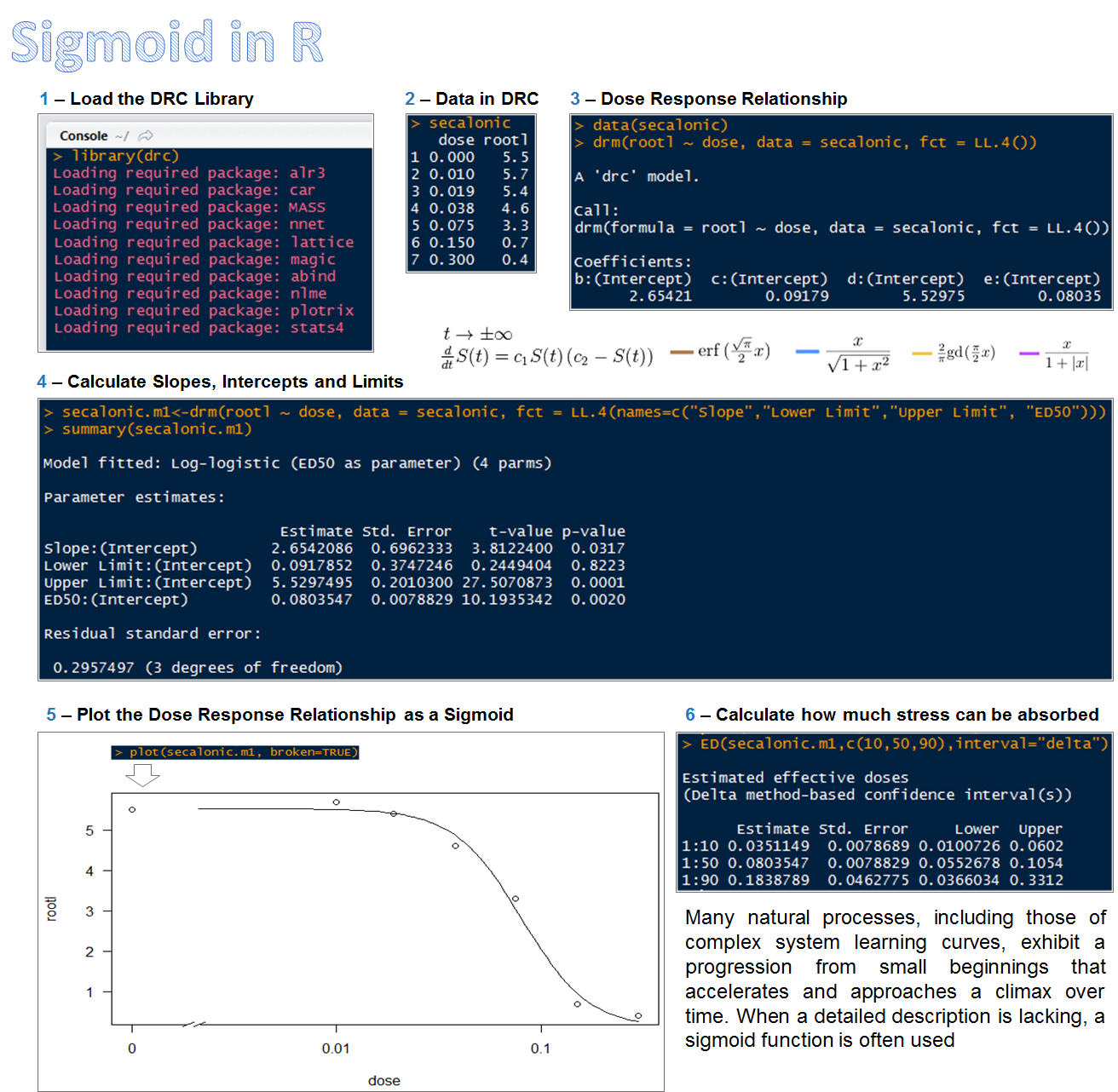 The application of the Sigmoid function is without any doubt fascinating and it definitely deserves additional postings on this site. What I would like to do is see how it can be applied to different circumstances in risk measurement and I am currently reviewing another paper on this topic that follows similar lines to what Nassim Taleb discusses in his Antifragile concept ... More to follow on that.

One aspect of the Sigmoid function we need to investigate further is how the non-linear function works, the dose axis has a logarithmic scale, it is a curve with multiple parts, four estimators or parameters that have different intercept coefficients. These coefficients modify the shape shifting aspect of the overall curve and drive out interval delta's which describe how something responds to different doses of stress, where our thing is fragile, robust, saturated or broken. The magic for making all this work will be predicated on connecting the coefficients to indicators, key risk indicators if you prefer that can be captured from a real operating environment.
Posted by Causal Capital at 2:36 PM