Basel III or the implementation of it is perhaps going to be more difficult to achieve than was first envisaged.

In this relatively short article, we are going to look at some of the problems that are becoming apparent in the Asian banking arena for Basel III regulation.

If you want to achieve a goal in life, any goal for what it's worth, sometimes the easiest way to move forwards is to simply look at what someone else  is doing. The same rule applies for building risk frameworks or Basel reporting programs.

So with that in mind, who has actually done it?

There is in fact only one country that can really say with honesty, that as a nation of banks, it is not only on track with Basel III but has pretty much done it. That country is Australia. There are other jurisdictions in Europe that are close to being well ahead of the game but unfortunately for them, they have additional economic and banking problems which are becoming a distraction.

When Basel III was formally announced late last year, the Australian banking community put up its hand and said; we'll have this dusted in a couple of months. This is quite an accomplishment really. So the question is, what have the Aussie banks done differently to make their Basel III agenda so straight forward?

The answer to that question sits deeply in the predecessor of Basel III, Basel II. 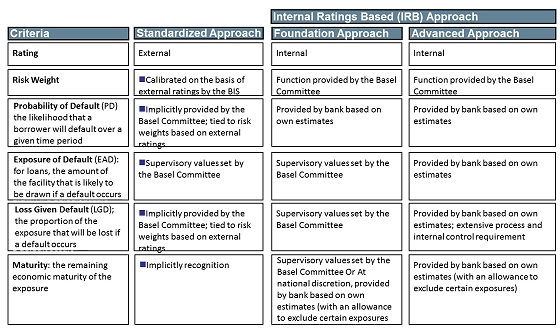 Banks which have taken Basel II to the Advanced Level for Internal Ratings Based Approaches are going to find Basel III inherently easy to walk through. They will have all the specific risk framework parts in place to correctly measure credit risk, carryout internal ratings (a requirement of Basel III) and they will be able to report a risk weighted exposure as a floating function against recovery. More critically and from a Return on Equity perspective, they are also going to be able to report a solid Risk Adjusted Return on Capital number.


Banks which are stuck on the standardized approach for credit risk (much of South East Asia on a good day) are going to find they are hit with two curses:

[1] The first is that their capital floor will increase as a direct notional outcome of their banking and trading book size and, they won't be able to separate or internally adjust true risk weighted measures of exposure against this capital floor.

[2] Secondly, broader aspects of a functioning bank wide IRB frameworks can easily be leveraged off to achieve many of the reporting requirements for Basel III. Basel III in this sense becomes an extension of the Basel II risk reporting system. On the other hand, if a bank does not have an IRB framework in place, a lot of work will need to be done. From the ground up these minor "IRB-like" addendum's to the risk service become major system development projects. What is really tragic is that these risk system extensions probably come with the same costs as an IRB reporting facility but without the marginal capital benefits that a healthy IRB framework would normally offer.

For what it's worth, most banks in South East Asia are actually well capitalized, however that still doesn't detract from the fact that some Asian banks are going to need to do a lot of complex model development. The track record for Basel II in Asia hasn't been too crash hot either and over the last few years, Asian banks have in general been struggling with Basel II. This is an outcome of running these type of programs on slim budgets and without particularly well manged results, cut the budget and the bank has to do a lot more work internally and some banks simply haven't picked up the baton.

Basel III wrong way risk modelling, internal ratings, liquidity risk and many other aspects of the new accord are just as complex to comprehend as Basel II-IRB and probably equally difficult to bed down in the bank. In short of it, the work doesn't go away, the requirements are just as elaborate and banks will end up having to complete Basel II Pillar II before really entertaining anything substantial from Basel III. There are also deeper concerns for South East Asia in respects to Basel III. Many of these issues can't be covered in this short article but I will certainly do so in subsequent posts.

One concern is the liquidity risk measurement requirement.  For banks this isn't only working out whether you can pay their electricity bills on time but more so, the transfer pricing between assets and liabilities across entities. Leading up to the credit crisis, some Asian Banks were looking at ALCO & Internal Enterprise Capital Adequacy Assessment Processes (ICAAP), a lot of local banks are also no through this work, yet some haven't even started.  If you want to correctly measure liquidity risk, then this ALM/ICAAP element needs to be in place and fully functioning before you can open the Basel III book on liquidity.

Losing sight of goals
Interestingly the banking landscape described in this article [Link Here] over a year ago is still current news. Not much has changed except the capital numbers referenced in the article have gone up. The Korean banking sector has gone down or to be precise, Korean banks keep needing to be restructured and there seems to be no end to the runs on their deposits [Link Here].

So what is the solution?

Well digging our heads into the sand (an endemic colloquial trait for some risk managers) won't help you if you are a risk department for a local bank. Risk managers need to be on the case of the local regulators, asking for guidance and the local regulators need to come forwards with a stepped approach on how to deliver Basel III for their member banks. All they seem to be doing at present is mirroring what the European banking circuit is harping on about which is, "capital is not enough and has to go up" or ironically "The banking sector is well capitalized, there isn't much to do".  Please at the very least be original and tell us something we don't already know.

This is a good move but more work needs to be done on the reporting of exposures, embedding risk practices in the community of banks and the Indian banking sector like much of the local emerging markets, comprises of large local institutions and quasi lenders. The latter pose noticeable concentration and systemic risks to the banking network as a whole.


Bear in mind however, Indonesia's banks are still to calculate and report the capital adequacy ratios (CAR) according to the Basel II framework.  Just in February 2011, Bank Indonesia Issued the final rule about the Basel II standardized approach for credit risk entering into force on 1st January 2012.

2012 for the finalization of the Basel II standardized approach is firstly a long way out and quite overdue. It is also a massive distance from where banks need to be for Basel III and I struggle to see how much of Asia is going to be Basel III compliant anytime soon.
Posted by Causal Capital at 11:25 AM