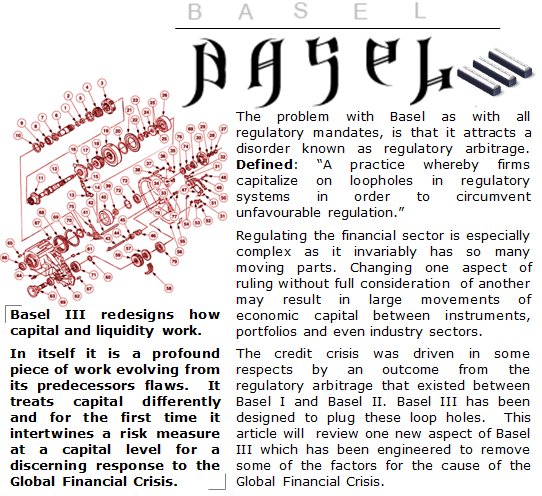 To understand why Basel III has been restructured in a new way, we need to take a look at what brought us to this place.

The big deal for lending teams all over the world when we roll back, well back before the global financial crisis, was Basel II. Lenders across the globe were excited and daunted at the same time to reach this accreditation standard and they had great incentive to do so.  On retail lending lines alone, there was a phenomenal regulatory capital release moving portfolios off Basel I and into Basel II RWA processes. 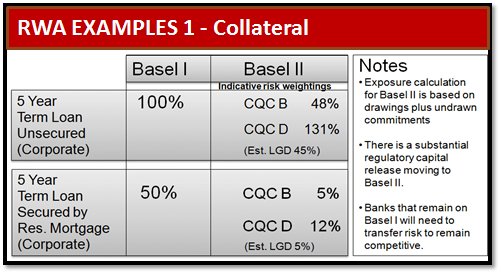 The expenditure on improving credit risk modelling programs was massive across the banking sector but the rewards were good as we shall see. Some medium sized national banks in the western world were spending up to and greater than eighty or ninety million dollars simply to bring their credit risk systems into the Basel II IRB standard.  Mind you, this is a small sum to pay when regulatory capital release on the entire retail banking book could be two or three billion for switching into Basel II; that is a huge payback.

Banks also had a good argument to justify the transition to Basel II as there hadn’t been the realized losses that Basel I was pricing into existing capital and it really seemed from all sides; that the time to move to a risk sensitive approach for modelling credit internally was upon us.  In some jurisdictions, financial institutions actually rode the regulators hard to move forwards onto the Basel II program and the fanfare reached insane proportions.

A US problem
Nearly all the counties globally embraced this new standard, Europe was the first to leap in but Japan and Australia were quick to follow.  When the banks have a standard to meet and are institutionally motivated to go across the line, the industry response is usually broard and deep. Across Asia it was a frenzy of Basel II analysts, risk software companies and consultants engaging institution after institution.  Really, some great work was done. 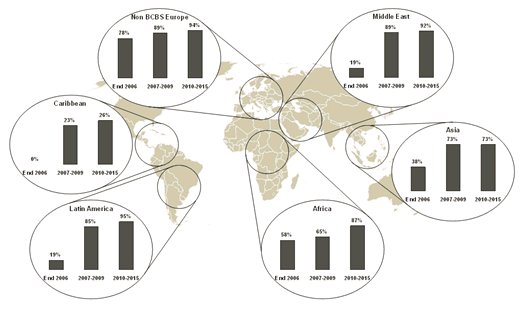 The diagram above is extracted from a survey run by the Bank for International settlements in the hay-day of Basel II IRB.  Non BCBS countries showed 88 countries representing 87% of all banking assets globally were to implement Basel II.

In the US, the banking sector was a different story and Basel II regulation lagged in implementation by several years. Caught in the Basel I trap, US bankers argued that they had a competitive disadvantage because they were holding more capital for the same loan book as a foreign bank on Basel II IRB.  They lobbied regulators to little avail and the irascibility in sentiment continually rose.  There are many arguments why the US struggled with its Basel II implementation but I put it down to two key factors:

| 1 |  There are perhaps too many regulators in the US. From the Comptroller of Currency through to the FDIC, the Federal Reserve itself has twelve individual entities.  So many opinions with statutory signatory are going to take a long time to endorse a foreign yet global mandate.

| 2 |  Basel II was being front run by the Federal Deposit Insurance Corporation-FDIC and one does fair that there might be a conflict of interest between Basel II and the FDIC.   If you think about it, the organisation that is responsible for insuring depositors funds, is going to be highly cautious endorsing a ruling which might actually drop capital floors in financial institutions they are covering.

The Transference Solution
When a bank takes on credit risk from its lending line, it really has handful of regulatory choices for cover.  Most commonly, it will capture this exposure with capital that is made up of Tier 1, Tier 2 or Tier 3 capital.

Tier 1 capital comprises of highly liquid instruments with low risk at one end of the scale and Tier 3 capital is made up of instruments that are less liquid and contain more risk at the other end of the spectrum.  Examples of Tier 1 capital include common stock and retained earnings, while examples of Tier 2 capital include undisclosed reserves, hybrid instruments and even subordinated term debt.  A point worth noting between Basel 1 and Basel 2 is that there isn't much difference in regards to the classification or structure of T1, T2 capital; the numerator of the Capital Adequacy Ratio. 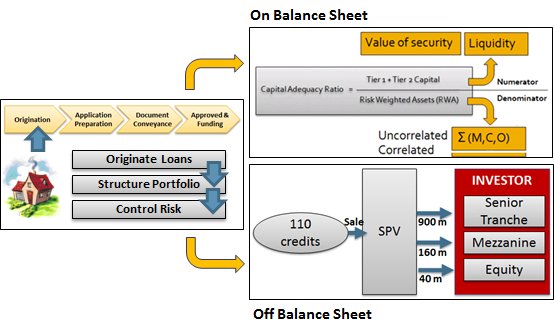 Alternatively, banks may not choose to hold the risk at all on their books and why should they?  Some loans have a 25 year tenor on them and in that time the bank may choose to restructure its books.   Normally banks don’t transfer single loans off their banking book, what they will do is package up an entire portfolio of loans and pass them into a Special Purpose Vehicle SPV using an instrument such as a Collateralised Debt Obligation to achieve this end.  The loans may actually still reside under the banks control but the bank has no claim on the cash flow from each contract other than a small maintenance fee.   All loan repayments are passed out as they occur and into a Special Purpose Vehicle for distribution to investors, the risk of course is in effect passed out to the market as well.

Asset Backed Securities such as Collateralised Debt Obligations can also be graded into different tranches of exposure to suit each investor’s risk appetite. Low levels of tranche subordination will absorb losses from mortgage defaults first but pay better returns, while bond like instruments linked to the SPV pay coupons in response to repayments from home owners servicing these mortgages.

What was the outcome
There were many outcomes from the misuse of securitisation.

The first was that banks were able to pass risk entirely into the market and consequently their “care factor” for credit origination scoring dropped, in reality they would never be holding onto the default problem.  The more they sold, assuming they kept lending, the higher their commission returns would be in the structure.

Secondly they were able to pass risk into these Special Purpose Vehicles at such a rapid rate that their capital lines were barely being impacted. 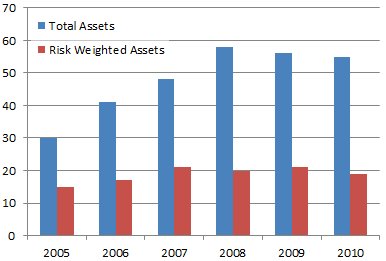 US Bank RWA:TA Ratio in Trillions

From a study carried out by the Bank for international settlements in respects to formulating Basel III, shows that from 2004 to 2009 total assets at the top 50 banks increased massively when compared against the Risk Weighted Assets. This spread between Total Assets and Risk Weighted Assets deviated substantially from country to country, where countries on Basel II had a narrower dispersion than those stuck on Basel I which had selected securitisation to optimise their return on capital.

If this wasn't problematic enough, senior tranches of assets booked through Special Purpose Vehicles were receiving great ratings, in some cases premium investment grade rating.  The ratings were certainly good enough to allow these debt structures to pass as Tier 2 capital quality and many "SPV Bundled & Wrapped Loans" actually ended up onto the numerator aspect of the Capital Adequacy Ratio of another bank.

Now full regulatory arbitrage in the United States had been achieved and the ability to measure or control risk was circumvented.  Loans were originated at any level of quality, passed out to the market and amazingly back into the bank capital tiers. 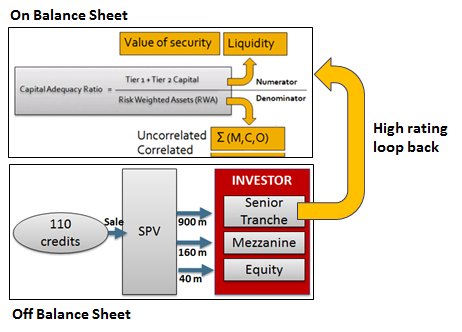 During the lead up to the credit crisis, banks were using subordinated debt structures, hybrids and a whole range of instruments as T2 capital. This in-turn allowed them to lift their capital ratios and propagate additional lending.

To look at it another way banks were supporting debt for the future with debt from the past, to party on in regulatory kite-flying imprudence.

In the latter phases of the credit crisis, this T2 capital line was unable to support the massive write down in Risk Weighted Assets.  As market volatility and stress increased, the mark to market losses on T2 capital made the instruments highly illiquid and in many cases banks simply became insolvent.

The Regulatory Response
In response to the Global Financial Crisis, many regulators have spawned specific initiatives.  In the context of this article, we are particularly interested in the new Basel III approaches and we will be discussing Basel III in Part 2 of this blog with a focus on how Basel III fixes these specific problems and loop holes.