The Global Financial Crisis (GFC), The Credit Crisis, call it what you may, although I fair the latter title came first; has been debated across the world.  Governments, industry small and large, banks, actually I am not sure there are many people in society that have not at the very least been impacted by it.  However, what is not common consensus is the cause.

Was Wrong Way Risk a cause of the Credit Crisis?

Some people claim it was poor lending standards, others blame these wonderful weapons of mass destruction (originally quoted by Warren Buffet on an entirely different subject), capital standards, greedy traders, the detachment of Wall St from Main St and I have even read some theories from camp bizarre but we'll leave them to the side for the time being.


A Logically cohesive study on the “what went wrong” – chapter 1 AND “the changes to banking regulation” – chapter 2 (the document has this leading dialogue-style to it) is The Turner Review. The Turner Review was published quite a while back in 2009 but is definitely an important read for those people interested in studying the GFC.

Even though the Turner Review captures a large range and aspect of issues very well, something is not emphasised enough in this document, perhaps not clearly spelt out.  That is, it is entirely possible that while the Turner Review highlights leverage driving risk to high levels and fundamental flaws may exist in some of the models banks are using, the ever present hazards of Wrong Way Risk aren't being given enough attention and in many cases they are entirely missing from banks risk calculations.

Very few regulators or governments have attributed Wrong Way Risk to being one of the causes for the Global Financial Crisis and this isn't because analysts, auditors and authors have missed anything. I fair some regulators simply went about studying the global financial crisis too early and specific knock effects hadn't run their course. Consequently, certain effects of Wrong Way Risk weren't included in the studies and reviews as they were published.  In the presentation attached here, we are going to make a connect between Wrong Way risk and some trading practices that are an ongoing concern for the stability of the banking sector as a whole.


What is wrong way risk?
Wrong Way Risk occurs when exposure to a counterparty is adversely correlated with the credit quality of that counterparty.  Generally speaking there are two key types of wrong-way risk:

1. Specific Wrong Way Risk
Specific Wrong Way Risk can best be described with an example. Let's say a company chooses to use its own shares as collateral for position taking, does that sound risky? Well one outcome which may occur is that if the company suffers cash flow difficulties, then the value of stock will drop as the probability of default increases. We are in effect Wrong Way and this can lead to a depreciation of the collateral value held to cover delivery of contracts the firm has opened and inevitably higher losses for the bank.

It is the Conjectural Wrong Way Risk which is of the most concern because it is both difficult to detect on a banks trading book and hard to measure, definitely complex to resolve.

The Greek Sovereign debt crisis was in part much to do with Wrong Way Risk and this issue isn't limited to Greece. 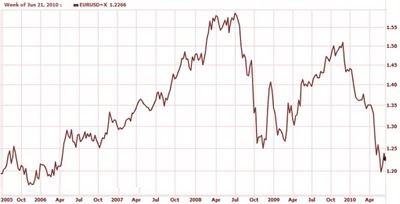 Greece of course did have trouble financing government debt however one of the big reasons driving this was originally Wrong Way Risk.  The debt Greece has was in much part tied to a bond link swap that will operate perfectly with a Euro trading in a specific range however as the Euro collapsed in value the notional exposure of the swap moved very out of the money for Greece. This drove the true close out value for the debt (the money Greece has to repay) higher, it also assisted in deteriorating the sovereign credit quality of the country further.

Bond Link Swaps are not especial to the Greek Government and many institutions all over the world hold them on their trading books, they are also not the only derivatives that contain Conjectural Wrong Way Risk.  I have taken to list some other financial products that if not sold and managed correctly, can expose banks to exacerbated losses from this risk category. 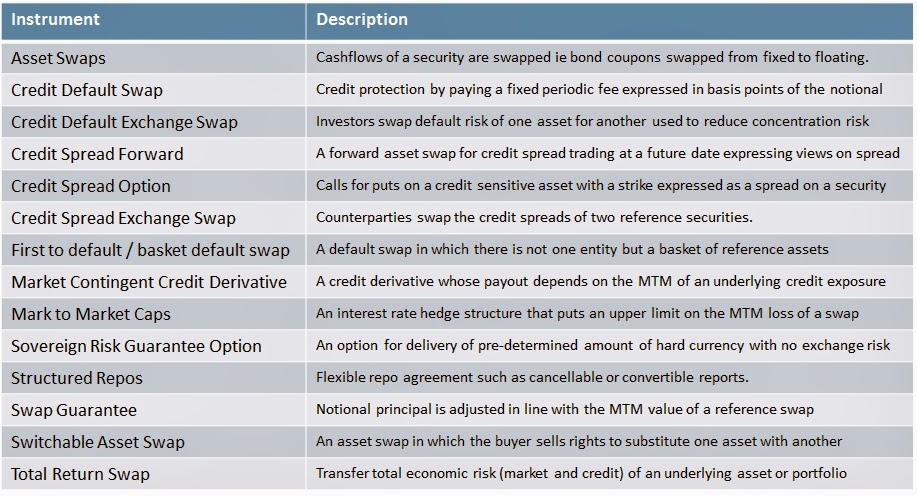 
This list is not definitive by any stretch of the imagination and Wrong Way Risk can be found on equity products especially hybrids and commodity swaps with financing. The cross currency swap is prone to this disorder and needs careful monitoring and hedging.

Is Basel III the solution?
With each new Basel accord comes major challenges, for Basel II this included operational risk, three pillars with home host regulations, liquidity risk and the offering for banks to internally calculate their capital.  Sadly some organisations are still in the throw of building their risk frameworks for Basel II and before they are done, they will have Basel III to contend with.  This link is one of the pivotal information releases that gives insight into the direction the Bank for International Settlements is taking with the new accord.

While procyclicality amplified shocks over the time dimension, the inter- connectedness of many large banks and other financial institutions transmitted negative knock on effects to other parts of the financial system and eventually the economy.

Like its predecessor, Basel III will also be introducing some new and challenging objectives. One of these new requirements is a major emphasis on counterparty risk with improved modelling for Wrong Way Risk.  There are other considerations however the Basel committee is particularly stressing a resolution for undertaking 'interconnectedness'. 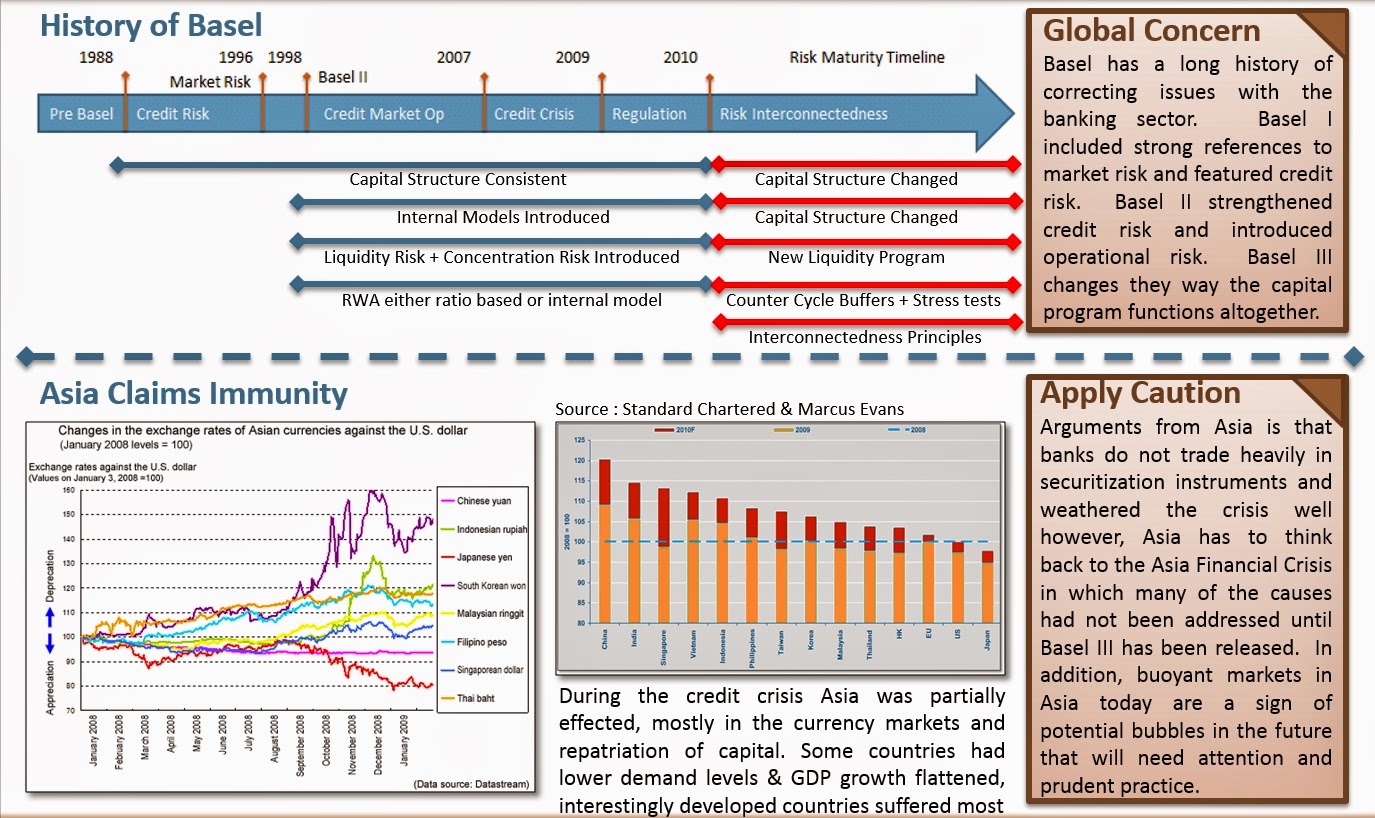 There will also be a heavy focus on the development of CVA calculations some banks have already adopted. From the collateral corner, Specific Wrong Way Risk will need to factor in the banks measurements and the more complex stressed EEPE estimations will need to be quantified as well. The ability for banks to meet this Basel III accord will actually come down to their discerning keenness and aptitude to measure Counterparty and Wrong Way Risk in the many aspects that it appears in this mandate.

Basel III is without any doubt going to be another huge fanfare over the coming years ahead and I fair we might be publishing more articles on Basel III and interconnectedness.
Posted by Causal Capital at 10:57 PM