When a company chooses to fund a project, it can do it in three key ways.   It can raise equity capital by selling shares on the market, sometimes in a private way.  It can borrow either internally from cash reserves by reinvesting profits or it could borrow from a lending institution or even issue bonds in the market.

The idea is that the cost of equity or debt (most projects have a mixture of both) should be representative of the risk within the project. The higher the risk the project has; the more volatile the earnings are likely to be and that will follow through with a larger beta factor as a consequence.

All pretty logical and the total average cost of capital can be given by this renowned formula:

It follows that the cost of equity-capital will naturally increase with financial leverage.   This also makes logical sense because high debt repayments become an on-going negative cash flow for the firm which will have to eventually be supported by positive cash flows from revenue.  In effect, the risk has increased as an outcome of financial leverage.

This is relatively straight forward stuff and there are so many presentations on this subject I decided to grab an anonymous one off the Internet and attach it here for reference sake.

The proposed debate I am going to drive out here is beyond the workings of WACC but before this can be introduced, some foundations need to be bedded down.  The goal with this post is to hopefully extend and expand the risk measurement practice of project finance because it is this aspect of valuation, which is tragically lacking across the project finance industry at large.

Calculating Betas
Both equity and debt betas can be calculated using the same approach for what it's worth.  In equity betas, the growth rate can be estimated as an extension of the Capital Asset Pricing Model.  The CAPM model derives the firms cost of capital from its covariance with the market return. 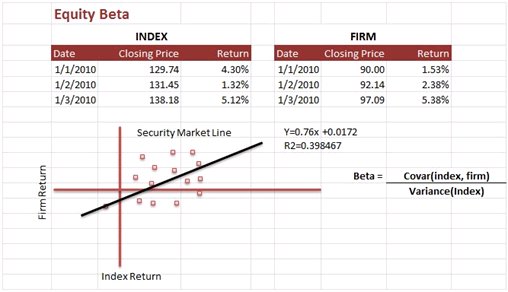 A regression line (security market line) is created for a specific index that represents the firms industry and returns are benchmarked from the firm against those from the industry index.

The cost of equity in this case will be the Rf +B(E(Rm)-Rr) where Rm is the expected return of the market.  Firms with a high beta will have more volatile earnings and will exist further along the security market line than firms with lower betas. This process is actually aligned with our statements around WACC we made earlier on and can be extended into the debt aspects of a balance sheet.

The cost of debt is obviously a marginal cost to the firm before taxes and for each additional dollar borrowed. It can be calculated in numerous ways however, one approach is to extend the CAPM model directly. 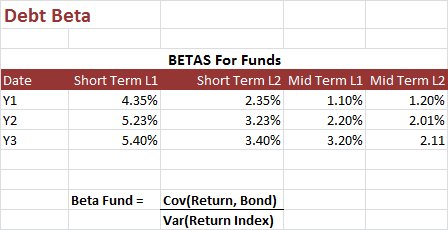 Take a set of bond funds which have a similar rating to that of the firm being modeled and create a hypothetical SML line for each bond betas.

This may sound easy however, there are a whole soirée of difficulties for constructing either cost of equity or debt models derived from CAPM methods.  Some of these issues have been listed below and include:

In the end, one reaches a point with all of these complications around the CAPM modelling approach, that they might question whether the technique is viable for relative valuation at all.

Separating financial risk from business risk
The issues with cost of capital and debt betas are that bankers and investors believe that they have captured all the normal expected risk.  It makes logical sense to compare a firm's earnings against that of an index as it fits a typical rating agency model and it also allows investors to compare one risky asset with another.

How do we really understand the risk?

It is possible using Hamada’s equation to separate theoretic risk of a levered firm from its business risk. The equation to do this draws its theory from both Modigliani Miller as well as the CAPM model and it is ideal for determining levered betas.

Where Bl and Bu are the levered and unlevered betas, T is the tax rate and φ the leverage ratio.

Hamada's equation separates the risk of the business which is reflected here by the beta of an unlevered firm, βU, from that of its levered counterpart, βL and that contains the theoretical financial risk of leverage.

The big question of course is, does this measure of risk represent the true hazard in the firms business or is it simply separating out the parts?  Then we have to question deeper that anything which is based on Modigliani Miller theory should really be taken with more than a pinch of salt.

Both these cash flows have a function of probability around them which is often ignored.
A true measure of free cash flow, FCFE-Future Cash For Equity and FCFF-Future Cash For Firms is normally based on model assumptions before even entering the valuation domain of CAPM.  The problem we have with assumptions is that they are difficult to test, price and prove.

For example; measuring the value of illiquid assets in a market requires a different model to that which might be used for a high volume mark-up business.  Can the two be compared?

To complicate matters further, projects with long run rates (time to wait before revenues materialise) may be high risk but that exposure might be mitigated away using a special purpose vehicle and an angel investor locked in a contractual handcuff.  Other projects might have cheap borrowing rates from overseas but are exposed to exchange rate risk.  Some projects are so risky, that investors would shy away from them without government concessions yet their valuations can be really good.

The frustrating point to all of this is that so many projects make the same mistakes over and over again because the risk is obscured from the investor.

There is for example a parallel that can be drawn with the failure of the EuroTunnel project and that of the Cross City Sydney CBD tunnel.  In both cases, cash flow errors in projections for both these infrastructure developments was brought about by ignoring unit cost of alternatives, who would have thought?

In the case of the EuroTunnel, which was a project with complex debt obligations and reliant on unit volume, it had to compete with cheap airline fares and ferries dropping their prices to protect their business models.  In respects to the Sydney Tunnel in Australia, the average customer perceived the value to make it across town faster through the tunnel rather than over congested surface roads to be out of whack as the saying goes, with toll charges.  The take up of usage in the Sydney case, which translates to the revenue line of the project, was so meek for such a considerable amount of time, that the state government (a major project stakeholder) had to entertain some rather dubious social practices to force traffic into the system.


Risk Centric Project Finance
Attached below is a hypothetical project risk component framework which takes in a wider aspect of many common project finance models but from a risk perspective. This is a first draft so there are some internal debates going on, especially in respects to where some of these nodes should be connected however, I am sure each in-congruence will work itself out overtime. 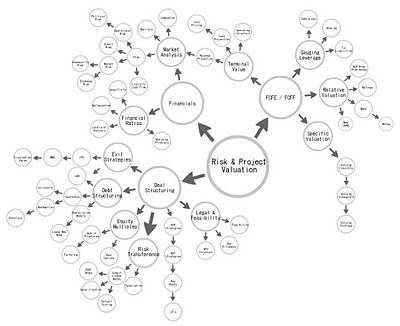 You are able to see this model live by following the PRV link. Please be patient while the page loads as the model is quite large and I recommend launching it in a tab or in the background in your internet browser.

Improving Project Risk Measurement
Over the coming months I am going to highlight specific items under each section of the project finance network which need consideration from a risk perspective and which should be part of the modelling and valuation exercise.  This might appear on the surface to be a gargantuan task in itself but actually it should be quite straight forward to accomplish, if a standardized approach is followed across each model node in the network.

What we are trying to achieve is to finish up with a complete check list which will allow for model variance to be priced into projects correctly yet, offset with alternative structures elsewhere in the project framework.

A final spreadsheet model will be developed and made available for download that captures risk in projects and this blog article should just be seen as an introduction to the risk valuation model.
Posted by Causal Capital at 4:22 PM