Issued in August and with one month to comment, the Bank for International Settlements has recently released Sound Practices for Implications of Fintech developments on banks and by extension, the supervisors of those banks are captured in this practice brief as well.

Perhaps one of the most significant realisations from this document is its existence in the first place, and while BIS occasionally make reference to emerging technology in practice guidelines, I am not sure they have ever issued a guideline dedicated to the subject alone [LINK]. If that isn't enough, the World Economic Forum also released a publication titled A Pragmatic Assessment of Disruptive Potential in Financial Services and their tome is certainly that, deeply pragmatic [LINK] and implicatively as detailed as the title lets on. Then only this week the Chinese government announced that it might ban fund raising mechanisms that originate via cryptocurrencies, a process better known to those in the game as Initial Coin Offerings but confusing to those outside such circles. Regulators from Australia, Japan and beyond, all seem to have new Fintech guidelines in their regulatory pipelines and we can expect BIS to have a major influence on how these regulators shape the Fintech landscape as new concepts come to light.

This week two of our clients also reached out to us requesting in-house advisory programs that investigate methods to transform their traditional banking practices into a new realm that is more closely aligned to the propositions originating from the Fintech galaxy. Causal Capital is establishing a program on this subject matter that will address four specific disruptive banking themes listed below. 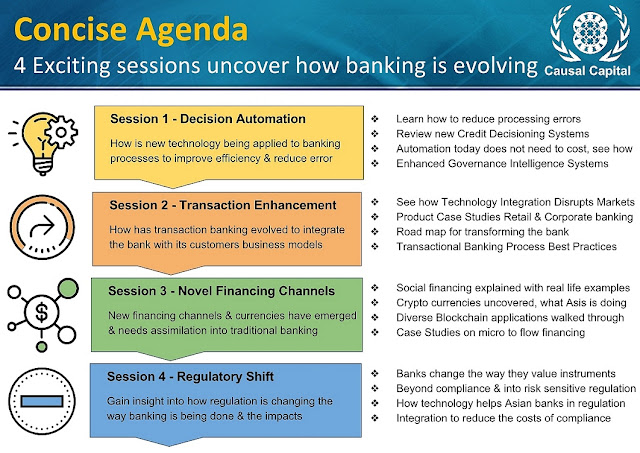 Moving back to our Bank for International Settlements guidance, it too seems to explore these "Sectoral Innovations" in four key areas which we have taken to redraw below. In fact, the BIS schematic is extremely valuable to bankers because it gives us insight into what the central regulator is likely to focus on when it looks to develop rulings for bankers that dabble in new tech and warnings for those that chose to remain antiquated and left behind. 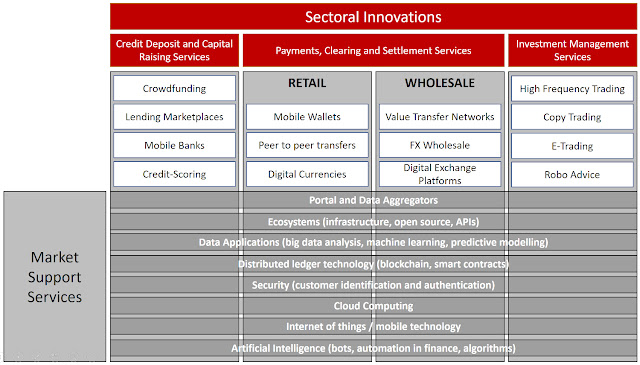 Sound Practices for Implications of Fintech developments on banks is a must to read for bankers, and it has been written with bankers in mind, so don't be too put off if you aren't a banker and find the dialogue daunting. The forward-looking scenario section is also quite interesting to ponder on and BIS explores how technology may create Better Banks, New Banks, Distributed Banks, Relegated Banks, Disintermediated Banking situations that drive systemic risk. It also demonstrates how challenging it is to give bankers risk guidance on something that doesn't exist. The narratives end up drawing the authors back into the PSMOR Principles Framework for operational risk management with a Fintech overlay (page 25).

All in all, there are 10 key recommendations to take away from this publication and an ominous table that lists different country regulators that have got their act together and those that haven't. It really is a refreshing read and over the coming weeks ahead, we'll publish more on this interesting subject.
Posted by Causal Capital at 10:14 AM