It was to be expected that the proxy system for calculating Basel II operational risk capital was always dangerously simplified and consequently fraught with inaccuracies that would under or overestimate capital. A recent publication from the Bank for International settlements confirms what risk practitioners have feared for years and in this post, we take a look at the new recommendations that have been released from the Bank for International settlements.

The assumption that a bank's operational risk exposure can be assessed by using Gross Income as a "proxy indicator" was based on the idea that banks become more risky in a linear manner as their revenue grows. The Bank For International Settlements has now proven this to be an invalid assumption after reviewing how banks struggled through the Global Financial Crisis, the outcome of the 2008 Loss Data Collection Exercise and the 2010 Quantitative Impact Study.

There are many problems with the Gross Income Proxy Indicator method for capital not withstanding operational risk capital ironically falls when risk stress and losses increase. Additionally, this linear indicator has resulted in an uneven capital reserve landscape for different banks operating in alternate markets. Some institutions are punished with capital floors that are too conservative, while other banks end up with capital shortfalls.  Banking is banking after all or it apparently ended up being so, and the differing Basel II Op Risk weights between the retail or corporate banking business models weren't so different after all.


The New Proposal
There are several changes being proposed for bank's operational risk teams that are going to impact a lot of the institutions in the emerging markets. I will take to list these changes below:

[1] Firstly the Basic Indicator approach is going to be retired ...


In the current operational risk regulatory framework, adoption of the TSA/ASA is subject to supervisory approval as well as to compliance with certain explicit qualifying criteria for risk management.  The Standard Approach will become the entry level capital methodology and its use will not require supervisory approval not will it require explicit risk management criteria. | Bank for International Settlements

[2] The Bank For International settlements is also expecting banks to progress through Pillar II items in a rigorous manner ...


The committee considers it appropriate to achieve more definitive rigorous and comprehensive implementation of the principles by setting out specific guidance under Pillar 2. | Bank for International Settlements

[3] The use of Gross Revenue as a proxy for standardized approaches is to be replaced with a Business Indicator system.

[4] There will be a new method for calculating operational risk capital which is still driven by proxies but "more sensitive" proxies as described below.


The Business Indicator system is based on three macro components of a bank's income statement: The Interest Component, The Services Component and the Financial Component | Bank for International Settlements 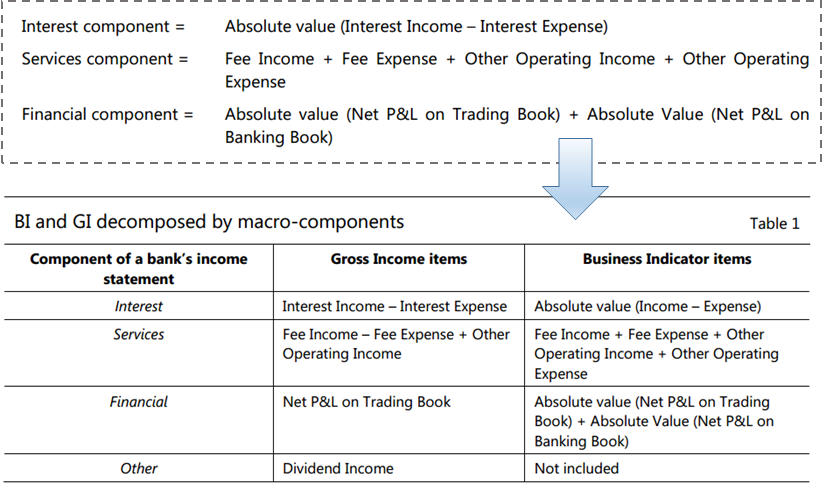 A description of the working definition for this Business Indicator method can be found on page 8 of the Bank For International Settlements consultative document [LINK].

[5] The activity of separating a bank's revenue into different business lines for the application of a risk beta charge is to be halted and business line revenue no longer needs to be mapped for capital calculations.

[6] A new and much more complicated coefficient has been created for banks of varying sizes which is part of the "calibration method" for the new proxy capital system. Banks will also be bucketed in a layered approach depending on the resulting size of their Business Indicator value. This has been calculated above in section 4 of this post. 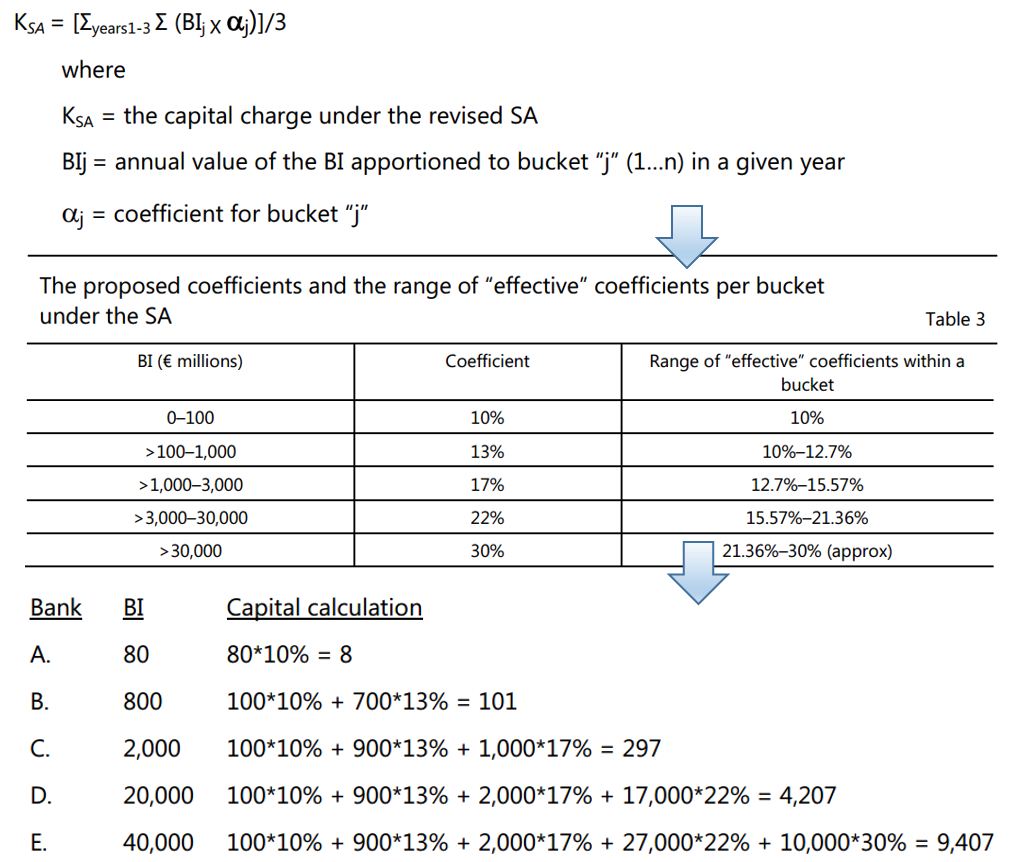 [7] Operational Risk Capital which is evaluated under the Advanced Measurement Approach (AMA) will remain unaffected by this new proposal.


Big issues for capital
This novel proxy system appears on the surface to be relatively problematic for banks that have a large Business Index number and it would be fair to say that operational risk capital numbers are likely to increase for many mid sized institutions. 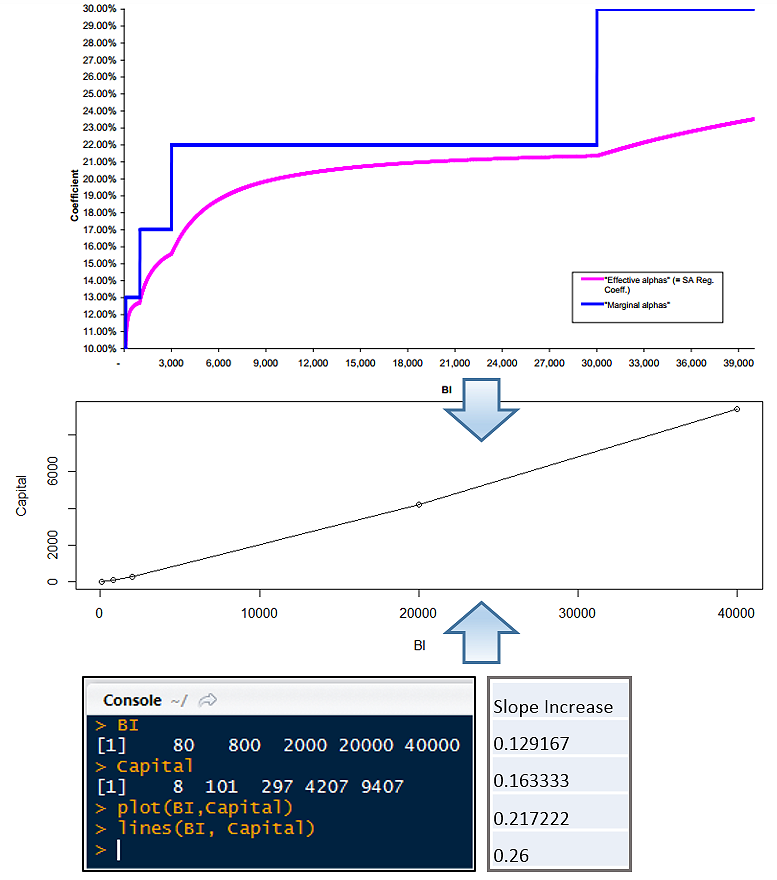 Somehow we have ended up at a similar place with this adapted operational risk capital system, just as we did with its predecessor in Basel II version 1; a very linear response to bank size.

We can see the growth slope we have calculated in our analysis (shown above) has been smoothed to reduce cliff effects and our calculation matches the pink curve supplied by BIS in their publication. All good or not so as it is because the response curve is a straight line of incremental costs. The reason why this has occurred is that the bucket percentage increase factors are too large for each incremental step and that results in heightened capital charges for mid-sized and large institutions. 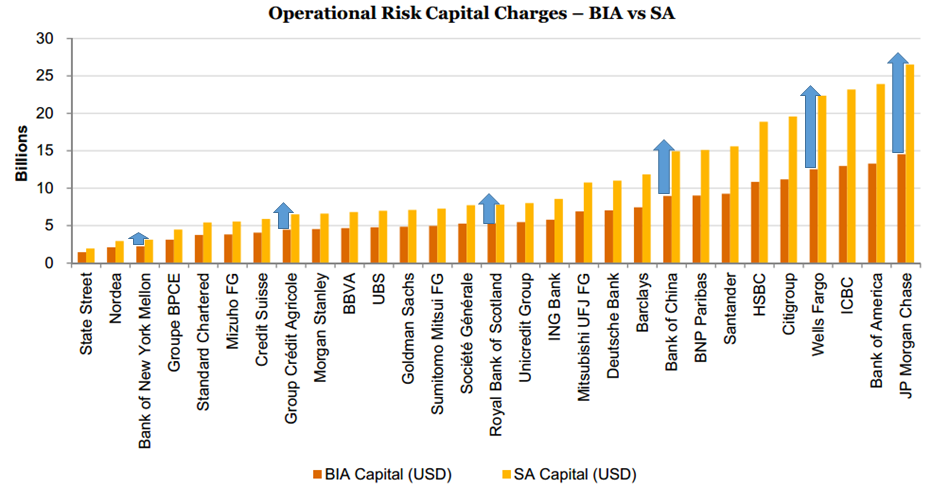 The regulatory brief paper released by PWC which can be found here [LINK] also has similar findings to our analysis with the same crippling slope curve response to capital numbers rising.

Capital is undoubtedly going to lift and PWC's model demonstrates the capital impacts to differently sized organisations could become quite perverse for mid-sized banks. In their hypothetical case study that is charted above, many of the banks represented in the study are already on the Advanced Measurement Approach so they won't be affected by this Basel II revision. All this aside, those that aren't on the AMA methodology are going to be in for an unpleasant surprise.

Additional concerns also sit around the absolute income method for the capital calculation where 'interest weighted risk assets' between banks across different regions are given a different Business Indicator value.  For example, in the Middle East an absolute value of the loan book is going to result in a much tighter capital number than the same calculation at a peer institution in a western banking region but then we have to ask ourselves; is the operational risk going to be so vastly different?

Most importantly, absolutely none of this capital tampering is going to help bank's risk management teams address operational risk!


Where should banks move next?
So how can banks avoid this impending regulatory doom sitting just over the horizon?

Firstly, read the consultative document published by BIS, consider it in the context of your organisation and respond to BIS just as they have requested.

Financial institutions that have already done well to establish their operational risk framework should attempt to move away from all of this formulaic capital proxy juggling, take the next step into the realm of the Advanced Measurement Approach (AMA) and be done with all of this.

At no other time has the need been greater to move onto AMA and this isn't 2004 when Basel II was first released. The industry as a whole has now developed quite mature practices for implementing an AMA operational risk framework, there are plenty of software systems available to assist risk managers with the capital calculations and the benefits for not moving towards AMA are thin given what lies ahead.

What is going to hold back a bank's progression into AMA?

Regulators perhaps, some of them still don't appear to be up to speed with Basel requirements which is really quite disgraceful a decade on. While the senior management in other banks also have a tendency to hold onto what was and avoid change but the benefits for doing so are about to run out.
Posted by Causal Capital at 10:19 PM