Recent investigative journalism has turned out some pretty horrifying developments and realizations at the Fukushima Daiichi Nuclear Facility ... The video from Vice is nothing less than deeply concerning.

If one considers the numbers and the reach of impacts from the Fukushima Nuclear disaster alone, we get this sense that this operational risk outlier is perhaps one of the top five most severe catastrophes of our decade. 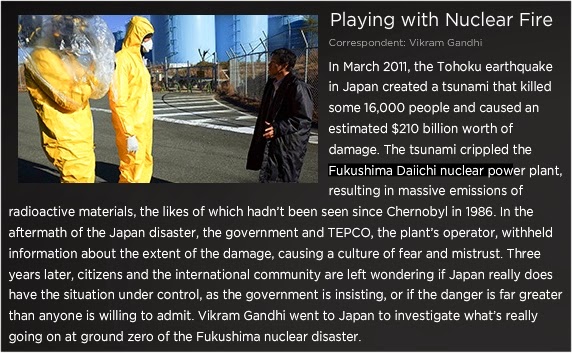 Some of the comments from senior officials interviewed leave me shocked to be bluntly honest:


The havoc that Fukushima has wrought isn't acknowledged by the government.

The Fukushima Daiichi nuclear reactor has emitted airborne radioactive cesium levels that exceed the Hiorshima atom bomb by 168 times but the population is told everything is okay.

Tests of local children over 40 kilometers away from the nuclear facility show there has undoubtedly been radiation poisoning, people should not be living here.

The big problem with nuclear disasters is that they won't fix themselves. So then, what is the final solution for Fukushima?
Posted by Causal Capital at 8:01 PM