Basel III slipping its deadlines isn't probably ground breaking news for anyone working in the Basel risk domain, it is even possible that Basel III may fail entirely but that is for another debate.

Today we are going to look at what worked-out in Basel II operational risk because this isn't a done deal either.

What worked out
The Basel Banking accord has been deemed by some as a bit of a failure and in many circles, the fact that we had to endure a credit crisis (still living it) didn't help. More seasoned risk practitioners see Basel as reactive to catastrophe rather than ahead of the crisis curve but then, the United States never really did entertain Basel II in much depth to begin with. When we take this latter fact into consideration, stating Basel II failed because of the credit crisis becomes a rather lame argument.

All of this aside, Basel II was much about operational risk, in fact; Basel II is the key publication from BIS (Bank for International Settlements) that treats operational risk in appropriate detail. Basel I was a bit of a preamble to risk management and Basel III is centred on capital and funding liquidity requirements but Basel II on the other hand is the winner's chalice for operational risk.

So while the US and UK regulators debate whether Basel should continue on, let's look at what really worked-out in the Basel II operational risk program. 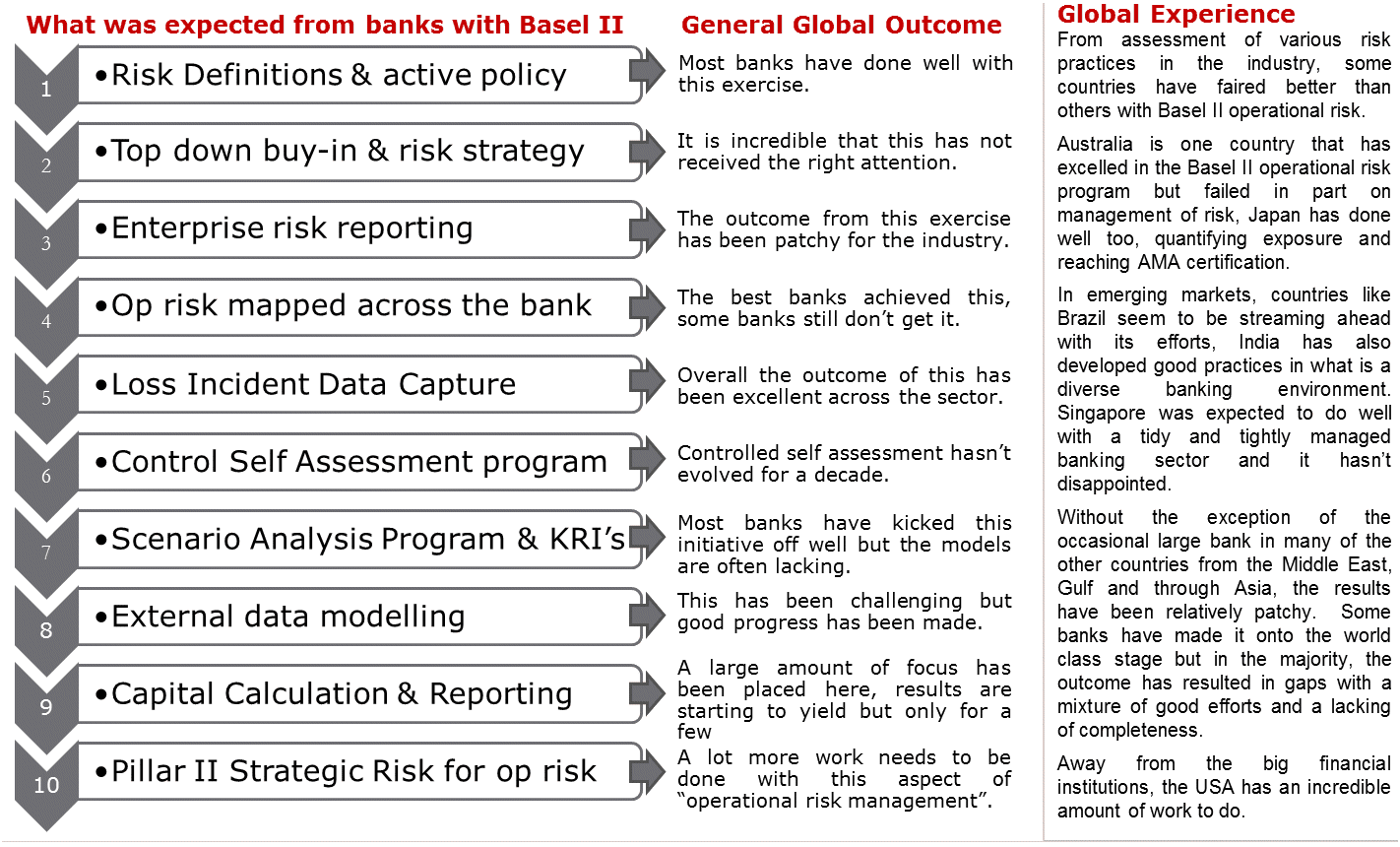 The ten success stories of Basel II are not unique in anyway and there are plenty of other aspects to the Basel II initiative that supported an improved risk function in banks. Nevertheless, these ten risk framework efforts seem to keep appearing as common; "this is an excellent element to our risk framework and has evolved our risk management practice in the bank".

The consummation can be simplified in the following way: Banks which have been able to instill a solid risk taxonomy, data capture and modelling program but also interfaced the outcomes of this quantification network into the broader risk management practice of the bank have done best.

If Basel II has achieved this amount of risk management discipline alone, I deem it as relatively successful regulatory work in progress effort.

Those banks which are trapped on the Basic Indicator Approach or the Standardized Approach need to focus on the ten success stories of Basel II. That is what lies ahead for them but the institutions that have made it to AMA still have a lot more work to do. 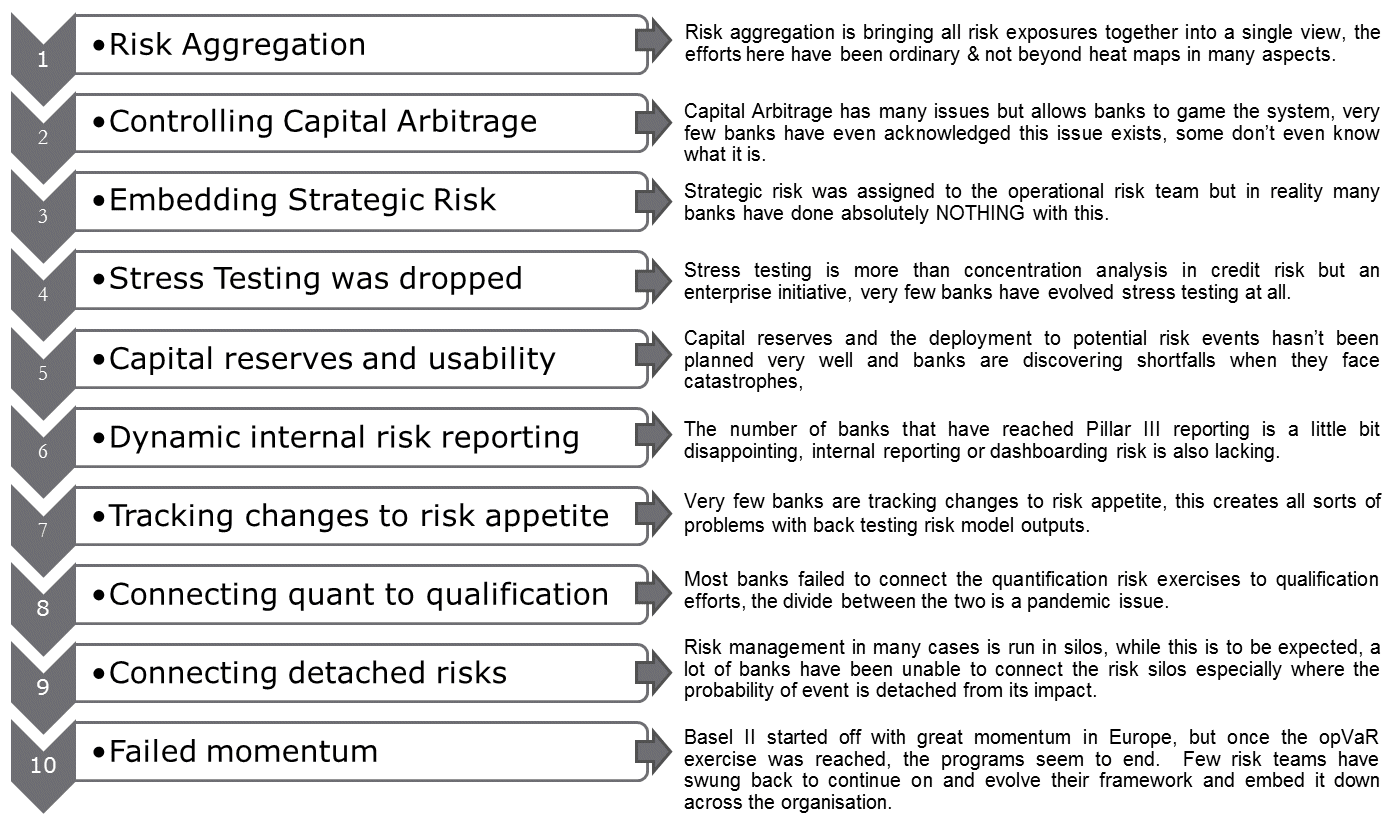 Many of the stubborn problems listed above seem to be driven by two fundamental problems:

[1] Interconnection of the risk silos between market, credit and operational risk
Problems around risk aggregation, capital arbitrage, strategic risk management, stress testing and capital usability; all require an interface that connects the different measures of risk across the bank. Theoretically, an economic capital transfer price system should bring this aggregation into play but I am not really sure that has happened in many cases.

[2] Management of risk
Measuring risk, calculating economic capital, opVaR or whatever, will not improve a bank's resilience to a potential catastrophic event. Measuring what you may be exposed to is only half the game and ignoring this fact offers great fuel to the critical debate that Basel II has failed.

Banks need to model but they need to reach outside that model as well and actually manage some of the problems they face.  As it stands at the moment, cynical lobbyists are blaming the models at the heart of Basel II's quandaries and they might have an argument if the models came at the cost of policy response.  In my opinion, both the model and the management response system need to be equally present and it should never be an either or choice when it comes to Basel II.
Posted by Causal Capital at 12:09 PM