Some things come in cycles is a common saying I am sure we have all heard before. This seems to be even more so the case when we are presented with a complex disorder which is stubborn to stamp out. We will have moments when everything looks fine, only to be presented with a set of known preconditions over and over again that result in what we thought was under control suddenly being less so.


Are risks more seasonal than we would like to first imagine?

Contagion Cycles
Perhaps one of the best places where this can be evidenced is in the surveillance of diseases such as the "seasonal flu". If you were to take a look at data on positive cases of influenza infection across either the United States or Australia, it becomes apparent quite quickly that there seems to be a repetitive pattern of re-occurrence. That is, the number of infections increase sharply, reach a peak in society then decline as the community at large becomes healthy or immune. A few months go by and this cycle starts over again making it just about impossible to eradicate the contagion entirely. 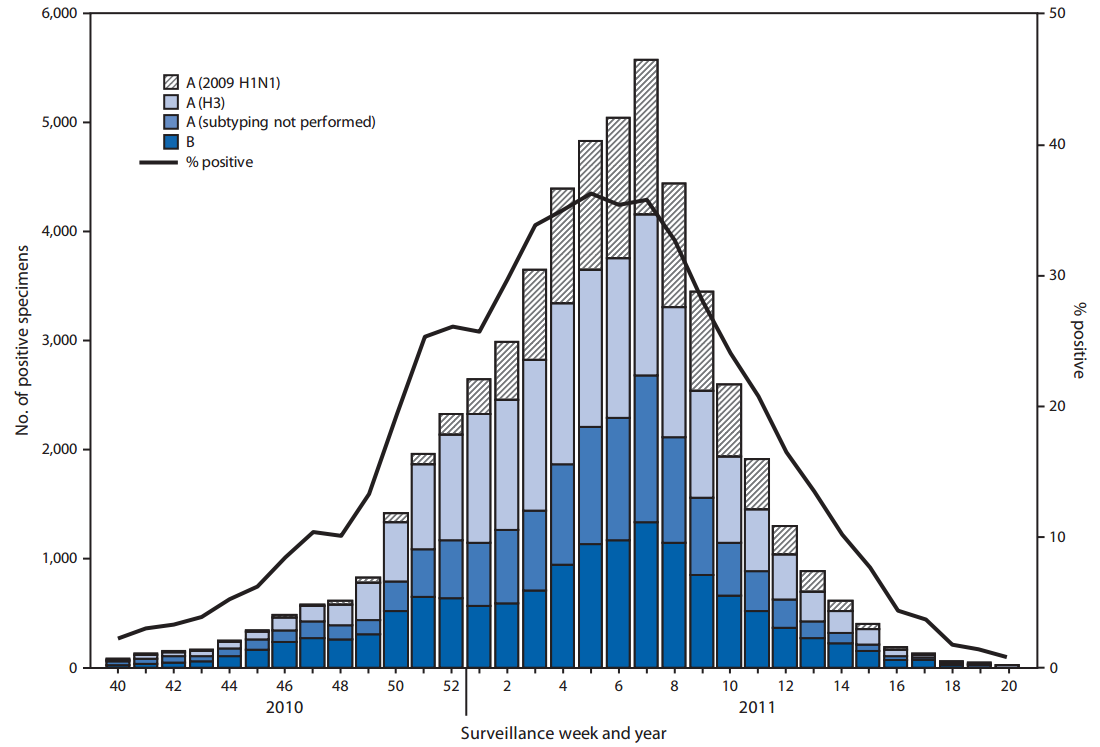 The statistical peaks and troughs of influenza circulation between the United States and Australia appear to be routinely "out of sync" and in a generalized manner. This 'feature of the data' would lead one to believe that seasonal weather patterns may be playing a central and substantial causal role in the infectious nature of the disease. Either way the peaks and trough patterns seem to hold year-on-year.

In both the United States and Australia disease data a baseline of infection for an expected case load of influenza is present. This fluctuates in a sinusoidal manner and allows us to forecast the number of infections over each period but it also allows an analyst to detect when abnormalities are occurring in the viral community.

Oscillators & Hidden Markov Models
Most common approaches for modeling seasonal baseline data types use cyclical regression methods and one popular model that is often used is the Serfling's approach. There is actually a good working example of this statistical technique on the Australian Department of Health website and the link for that can be found here [ LINK ].

Serfling's method has gone through a lot of changes or enhancements overtime and the formula goes something like the following:

The important point to note with Serfling's work is the use of the Sine and Cosine function to describe the epistemic and cyclical nature of an illness.

We can also extend this thinking into a Risk Clock that captures harmonic cycles of risk growing and decaying in a uniform pattern through time. Such a Risk Clock has been shown below as an expansion on various notes from Wikipedia [ LINK ] and you can see how the risk clock works by clicking on the image below to enlarge it. 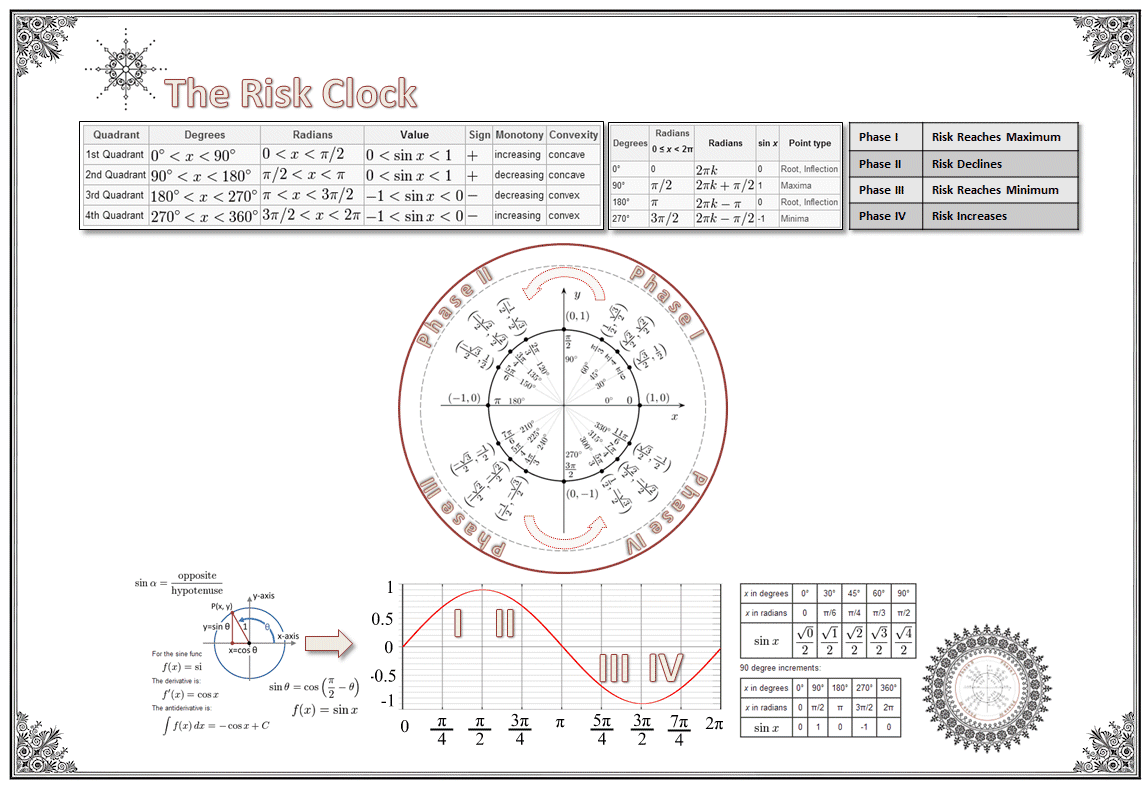 
The idea that there are natural harmonics of disorder that can be treated as an expected baseline is an interesting extension to a totally random uncertainty theorem and it assumes risk is a variable that might be oscillating. It is also possible that there are hidden Markov properties in the cyclical risk patterns and this idea has been written up by a team of analysts from Boston University.

Their paper can be found here [ LINK ] and is certainly deserving of a peruse.

Serfling seems to be everywhere

For a moment let's take this Risk Clock concept a little further and ask ourselves where else can these natural risk harmonics be found?

Market Cycles
If we turn to financial markets there are plenty of indicators which are cyclical in nature. Take indicators such as Moving Average Convergence and Divergence just as an example and straight up. MACD is a trend like momentum indicator which is created to identify the significance between the two moving averages: The 26 day exponential moving average and the 12 day version of the equivalent and the signal line is then plotted over the top of the MACD graph. 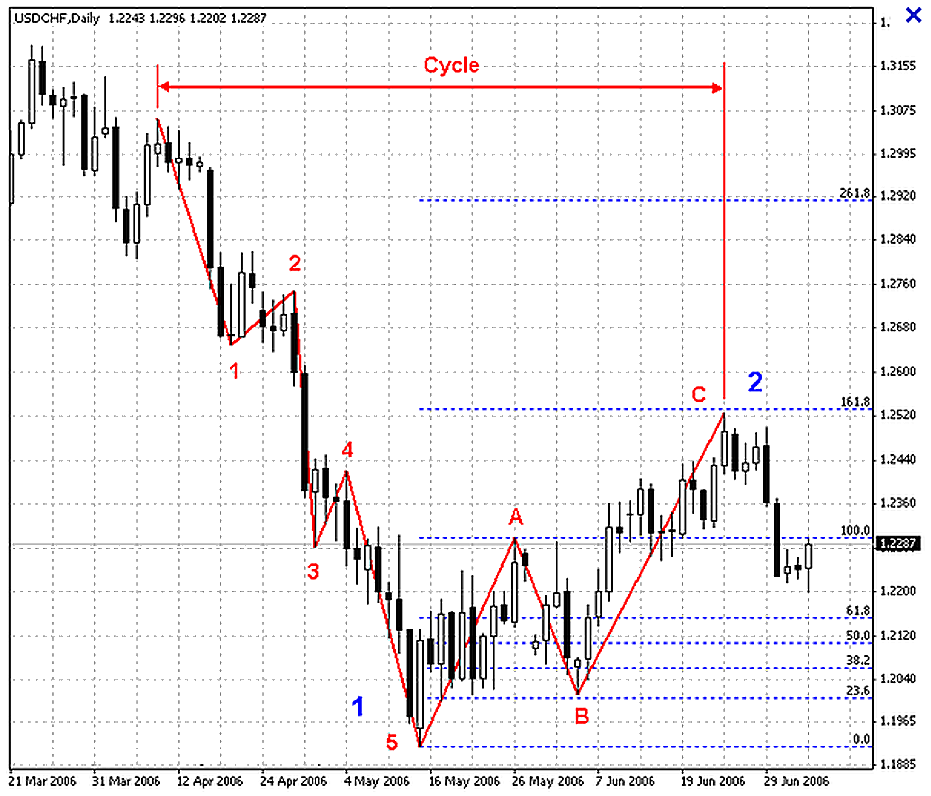 It doesn't stop with MACD line patterns and technical traders are swamped with plenty of oscillator signals that will give them an indication on when to take a position or to let it go.

Weather
One obvious place to expect oscillation modelling would be in weather and much work has been accomplished in this field. Earth has a natural climate pulse that can be quantified using a Primary Forcing Mechanism that assists analysts identify long-term displacements of regional high pressure systems from the expected baseline. Without any doubt, David Dilley's site is a piece of work too and he has applied incredible research to modelling cyclical randomness; a link for his material can be found here [ LINK ].

Air crash investigations
Joan Lowy from the Associated Press takes note that the longest period without a catastrophic domestic airline accident is occurring since commercial aviation begun and while that may sound like fantastic news and an outcome of improved standards, it is also the largest factor that puts the Federal Aviation Administration in an uncomfortable place. Just because unwanted events haven't actualized doesn't mean to say that all is well with aviation safety [ LINK ].

The banking regulation of Basel III has added many new risk elements to its regulatory toolkit and one such area of risk control is the management of procyclical effects in lending portfolios. However, while the creation of countercyclical buffers may be new for the Basel III banking accord, the concept of cyclical effects hidden within credit risk portfolios is not novel to banking. 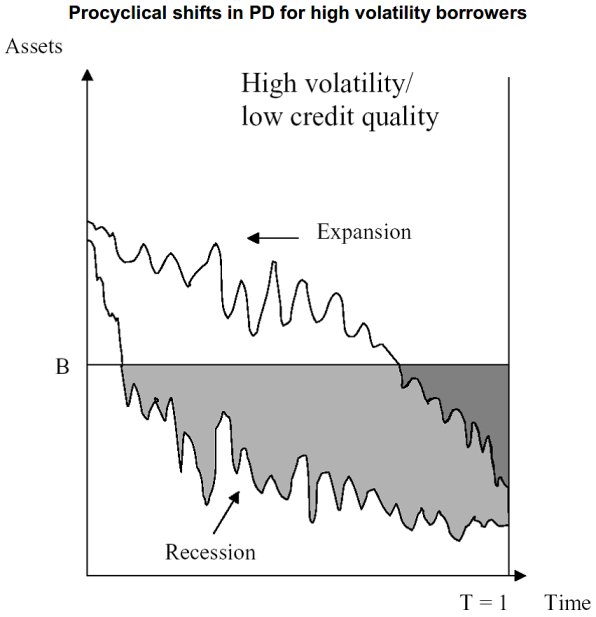 It is almost axiomatic that defaults and credit problems would multiply in times of distressed macroeconomic conditions. Moreover, good economic times provide the rising tide that lifts even the shakiest of financial boats. Thus, ex post realizations of credit problems display clear procyclical patterns that increase during recessions and decreasing during expansions - Bank For International Settlements [ LINK ].

In fact, if we continue to review various other areas of risk management, economics or science, the list starts to become a little endless and it is quite easy to discover evidence of the procyclical impacts from the oscillation of randomness in a huge array of casual risk factors.

All this aside, the practice of understanding the seasonality in exposure management is rarely given enough commercial focus in my opinion and I believe there are several reasons why this tends to happen. Let's list just three hurdles below:

[1] Firstly during a waning cycle in risk events through time, management have a tendency to be lulled into a false sense of security and take great homage that their risk management strategies are sound. In a similar manner in which Joan Lowy describes, risk standards are met, compliance costs are high and complacency sets in, risk management standards then fall until a catastrophe occurs before the cycle starts over again.

[2] The next problem is algorithm based and creating a model to manage cyclical impacts from causal factors to outcomes isn't so straight forward to achieve. It requires business managers to have a complete grasp across the numbers before the modelling can commence. Be that as it may, health organisations across the planet seem to have done very well with their methods for forecasting contagions and when it comes to weather, "cyclicality" modelling appears to be the heart of the science in meteorology.

[3] The final hurdle impeding the control of cycles in risk management comes from the behavioral corner. It is always difficult to go against the crowd when markets are rising and profits are improving. Sadly though, those risk managers who attempt to reign in risk taking attitudes through programs such a countercyclical buffering when everything looks blue-sky, tend to become unpopular very quickly.

In the end perhaps the old idiom rings true, "make hey while the sun shines and always save for a rainy day."
Posted by Causal Capital at 7:05 PM