The equities market a decade ago cannot be compared to what it has become today.

Over the last ten years globalization really has become that and connectivity has reached the masses.

The rise of Exchange Traded Funds, High Frequency Trading, the increase in the number of large positional hedge funds and the interest for sovereign powers to replace state funded pension programs with community based superannuation disbursements, are all driving factors for the emergence of asset bubbles.

In this short post we look at why asset bubbles are going to become a common occurrence.


The Widening Channel
The channel for raising capital today is wide, global and it has grown substantially over the last decade.

The acceleration of transaction growth has been extraordinary across-the-board taking in Global Funds, Hedge Funds, ETF's and cross-border private equity. It has reached a point where the total value of the world's financial stock comprising of equity market capitalization and outstanding bonds, has increased from 157 trillion to 212 trillion in just two years alone. Apart from some cross-border repatriation of funds, the credit crisis of 2008 had little impact on fund flows. What the credit crisis did do, was create massive amounts of market kapper as long-only investors fled to quality assets en masse. 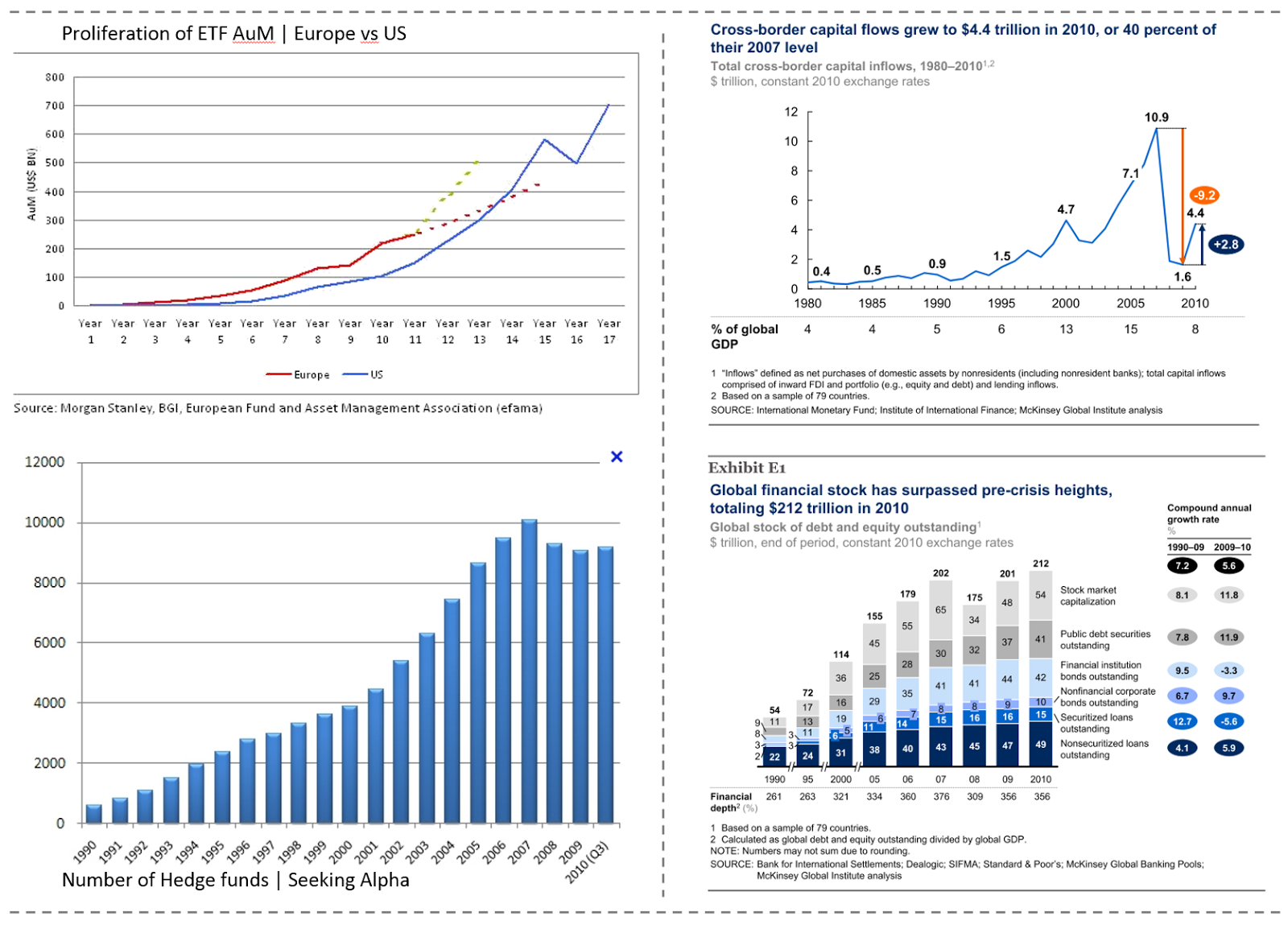 Is this a problem? Well, raising capital actually hasn't become any easier for new start-up businesses but since the dot.com bubble, we have seen a leveraged credit-fed property crisis in the US, a European Sovereign Debt Crisis, collapse of the property sector in the UAE, massive inflation in food prices and the unit value of gold and oil explode. The market has become hungry for yield in whatever form it presents itself in.

Herding creates bubbles and in my opinion it switches an investor's utility function. That is; investors move from a prospect based model that normally operates on heuristic weighting of potential upside, to that of a cumulative Bernoulli distribution.


A common utility model suggested by Bernoulli is a function of a gamblers total wealth and a concept of diminishing marginal utility with money built into it. For each possible event, the change in utility becomes the log of wealth after the event minus the log of wealth before the event and this result is then put over the weighted probability that the event may occur in the first place. Positive feedback loops of crowded markets have a tendency in my opinion to unevenly steepen this utility function while lowering the perceived risk through time.

These behavioral bubbles can also create disastrous outcomes financially, politically and socially as we shall see.

The way our markets are represented to the investment community doesn't help. We are encouraged to value growth even if the Price to Earnings ratios become obscene. Long-only investors, who make up the majority of the market, will flock on growing P/E's rather than shy away from them. They will even buy at the top and leverage beyond that position.

So where else is this being witnessed? 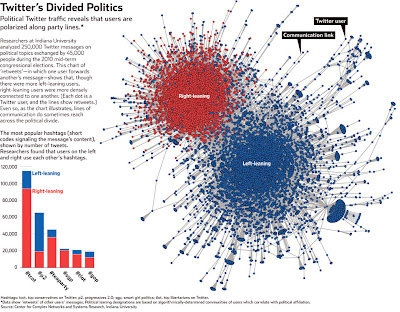 In the twitter network, political feeds have a right leaning sentiment which clusters even though the market is disbursed. With two choices presented to the twitter community, those for the preservation of noble wealth tend to unify and form a bubble. Disbursement on the other hand, has less collective power but alternatively disruptive creativity. Even if the right leaning party is culturally fascist, the tendency to cluster is still a natural aspect of living or dying as it was during the Rwandan genocide.

Now you may wonder why the Rwandan genocide features in this article but it also shows these properties of buy-sell-trade sentimental clustering, which builds up overtime until a tipping point is reached. In Rwanda's case, the support of national hatred coordinated through government controlled media, fuelled a complete emotional bubble. Mind you, Rwanda isn't alone when it comes to racial tension clustering but it did capture a common sentiment with the population at the time. This sentiment then propagated to a point where society literally turned in on itself and 800,000 people were slaughtered in a matter of days. [ More Information ]

A market is rarely utilitarian and it feeds off itself. Common themes cluster, then propagate a collective buying power to accelerate asset prices, positive feedback loops will drive directional movements and often result in over trading, over consumption and lots of hostility.

Crowded Markets
The crowded market episode of trade concentration is not an unnatural feature of life, as common consensus may believe. It isn't a human construct either and it can be witnessed in many other systems entirely away from the financial markets altogether.

Every year from May to July, the Sardine run of Southern Africa takes place. Literally billions of sardines spawn in the cool waters off the Agulhas Bank and are forced to move along the east coast of South Africa. [ More Information ]

The Sardine Run off the African Coast

This "safety in numbers" belief drives bubbles in the financial markets but its existence elsewhere in the ecological food chain actually gives birth to our very survival. As an individual player, each sardine is satisfied with a sentiment of safety by herding. This is not an uncommon behavior and the phenomenon can also be found on land, say with the migration of Thomson's Gazelles and Wildebeests across the Serengeti.

What would happen if the sardines stop herding?

If the sardines scattered when posed with a threat, rather than herd as they do today, the predators would go hungry, the food chain would fail and the oceanic ecosystem would collapse.
Wall St In Days Gone By | Open Outcry Markets

So why do open outcry markets work so well?

They are an embellishment of clustering which leads to transparency and monotonicity; just like our Sardine run, they enable price discovery. Buyers and sellers can collaborate easily (the pray and the predator are together), they can propagate additional market match making and they fuel bubbles. One solution the market itself has conjured up for resolving the downsides of this condition is by pricing and settling in a dark pool. There is so much noise in the markets today that the really critical deals are actually done on the side lines, not in an open market. [ More Information ]


In all of the cases above; if there is signal, monotonicity, even at a sentimental level, flow and clustering, then growth propagation is likely and secondary waves of trading pressure may occur. In many of the cases we have seen above, the resource will be exploited at any cost to depletion.

I will borrow a comment from a traveller I met not so long ago "the veil of society shows itself to be very thin at times of stress and crowding" ~ we are nothing more than animals trying to survive in a competitive market place.  A market place that is now integrated and crowded and, I fair we can expect a lot more asset price bubbles in the years to come.
Posted by Causal Capital at 11:48 PM